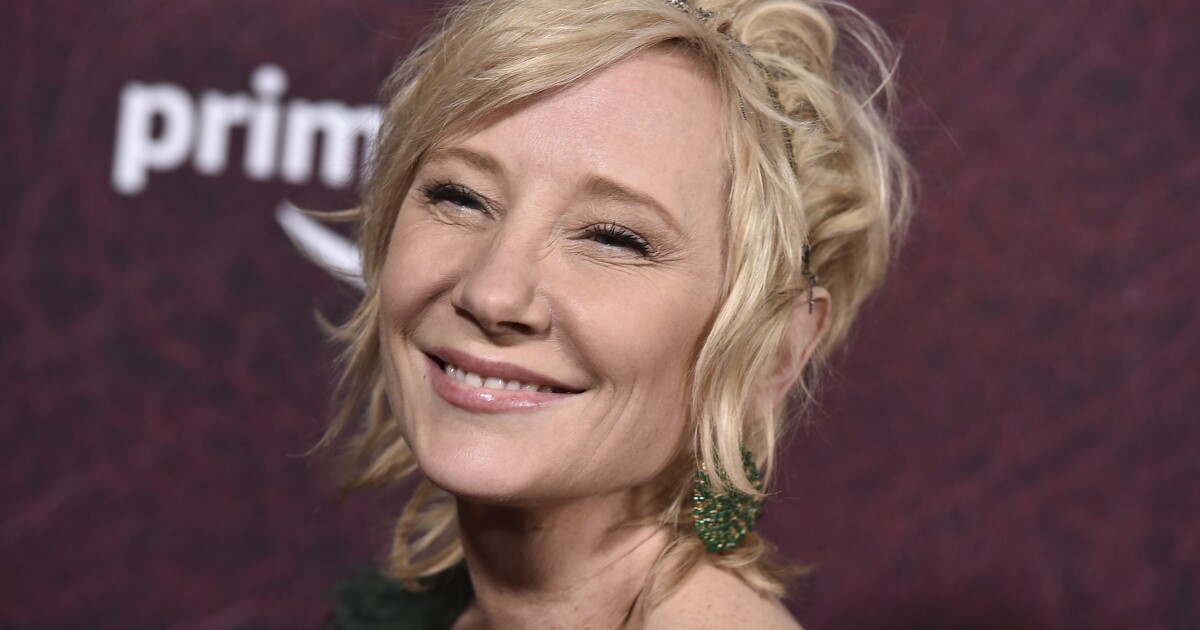 Actor Anne Heche is not expected to survive after a fiery car crash in Mar Vista last week left her in a coma, according to a statement on behalf of her family and friends Thursday night.

She is being kept on life support at the Grossman Burn Center at West Hills Hospital while medical staffers determine whether any of her organs are viable for donation, as had long been her wish, the statement said.

The crash left Heche, 53, with “a severe anoxic brain injury,” and she remained in critical condition in the coma, according to the statement.

“Anne had a huge heart and touched everyone she met with her generous spirit,” the statement said. “More than her extraordinary talent, she saw spreading kindness and joy as her life’s work — especially moving the needle for acceptance of who you love. She will be remembered for her courageous honesty and dearly missed for her light.”

Investigators, meanwhile, continued to probe the circumstances surrounding the crash and found that Heche was under the influence of narcotics at the time of the incident.

Officer Annie Hernandez, a spokesperson for the Los Angeles Police Department, said a blood test showed the presence of narcotics, but those initial findings could be invalidated if medications at the hospital turned out to be the narcotics.

A second blood test will be administered to rule out any substances that were given at the hospital as part of Heche’s medical treatment, said LAPD Public Information Officer Jeff Lee.

The results of the second test could take anywhere from 30 to 90 days.

Another law enforcement source told The Times that the initial blood test also showed that Heche had cocaine in her system after the crash.

The latest development comes days after a representative for the LAPD told The Times that detectives obtained a search warrant for the actor’s blood to see whether she was driving under the influence at the time of the accident.

On Monday, Heche’s spokeswoman said the “Six Days, Seven Nights” star was in “critical condition” and slipped into a coma.

On Friday, Heche was hospitalized with severe burns after crashing her car into a home in LA’s Mar Vista neighborhood and causing it to catch fire. Fifty-nine firefighters rushed to the scene and contained and extinguished the fire in 65 minutes.

Before the incident, the actor was captured on video crashing into the garage of a Mar Vista apartment building. She was also seen speeding on another street in the West Los Angeles neighborhood.

Right before the crash, Heche stopped by Glass Hair Design, a hair salon in nearby Venice, to buy a bright red wig. Salon owner Richard Glass told The Times that Heche didn’t seem to be under the influence when he sold her the wig.

“Very, very random,” Glass said of his encounter with Heche.

Residents told The Times that the home that Heche plowed her blue Mini Cooper into was severely damaged. Mar Vista resident David Manpearl said Heche’s vehicle crashed through the residence and was lodged in a wall in the back.

The investigation was escalated to felony DUI when detectives learned that a woman inside the house, which was engulfed in flames, suffered minor injuries and received medical treatment, according to LAPD’s Lee, who didn’t know her current status Thursday afternoon.

Heche’s Friday crash wasn’t her first instance of erratic behavior in public. After breaking up with ex-girlfriend Ellen DeGeneres in August 2000, Heche dropped by a stranger’s home in Fresno. She abandoned her car and, wearing only shorts and a bra, spoke of God and a spaceship to heaven.

On Monday, DeGeneres had little to say about her former partner’s accident and her current condition.

“We’re not in touch with each other, so I wouldn’t know,” the comedian told the Daily Mail’s photographer when approached in Santa Barbara.

On Twitter, Rosanna Arquette said Heche “clearly was in a crisis.”

On Thursday, Lifetime’s executive vice president and head of programming, Amy Winter, addressed Heche’s accident and the actor’s upcoming film for the network, “Girl in Room 13.”

“Anne remains in critical condition, and all of us here at Lifetime are deeply concerned for her and everyone affected,” Winter said during Lifetime’s presentation at the Television Critics Assn. press tour. “We hope that your friends and family stay strong during this difficult time.”

He had been scheduled to appear at the TCA panel. “Girl in Room 13,” directed by Elisabeth Röhm, is still on track for release in September.