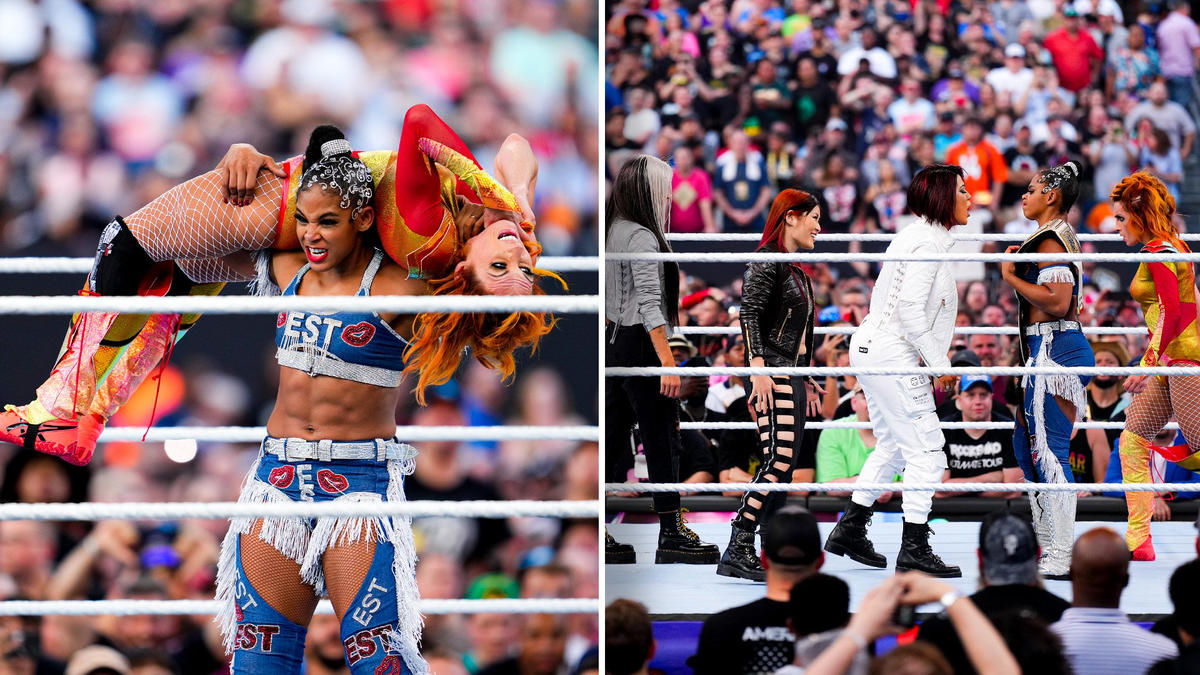 Bianca Belair and Becky Lynch have collided many times, but the animosity reached a new level as the two Superstars stared each other down with fire in their eyes before the bell.

Lynch used her ring skills to avoid the power of Belair, basking in the boos as she focused on the arm of The EST of WWE. After turning the tide with a standing moonsault, Belair hunted down Big Time Becks outside the ring.

Belair looked for a KOD on the barricade, but Lynch landed on her feet, Belair hanging across the barricade for a massive leg drop.

Lynch countered each attempted rally from Belair until the Raw Women’s Champion caught her opponent in the midst of a second leg drop and leveled her with a tremendous powerslam. Spurred by a raucous hometown crowd, Belair continued to pummel Lynch, dropping her face-first onto the ring apron before pulling her into the ring post for a back body drop onto the arena floor.

Reversing a KOD into a Dis-arm-her, Lynch looked to make Belair tap, but the champion rolled out of the ring to break the count and dragged Lynch with her for a jaw-dropping KOD onto the floor.

Lynch barely beat the referee’s 10-count, escaping another KOD before pulling Belair off the top turnbuckle by her braid for a Manhandle Slam and a stunning near-fall. Unsure what it would take to put Belair away, Lynch climbed onto the top rope for another Manhandle Slam, but The EST of WWE reversed it into a Spanish Fly before planting Lynch with a KOD to earn the pinfall and her redemption from last year’s Premium Live events

Following the conclusion of the Raw Women’s Championship Match between Bianca Belair and Becky Lynch, the WWE Universe is treated to a return from Bayley, who brings IYO SKY and Dakota Kai with her. Catch WWE action on Peacock, WWE Network, FOX, USA Network, Sony India and more.

After the bell, Belair hesitantly shook Lynch’s outstretched hand before the two embraced in a show of respect. But their emotional reconciliation was cut short as Bayley made her return to WWE!

Bayley brought Dakota Kai and IYO SKY along with her, leaving the WWE Universe stunned. The three made their way into the ring, but as Bayley advised Belair, Lynch stepped in to back up her former rival. The WWE Universe erupted in anticipation of a brawl, but Bayley, Kai, and SKY chose to retreat.