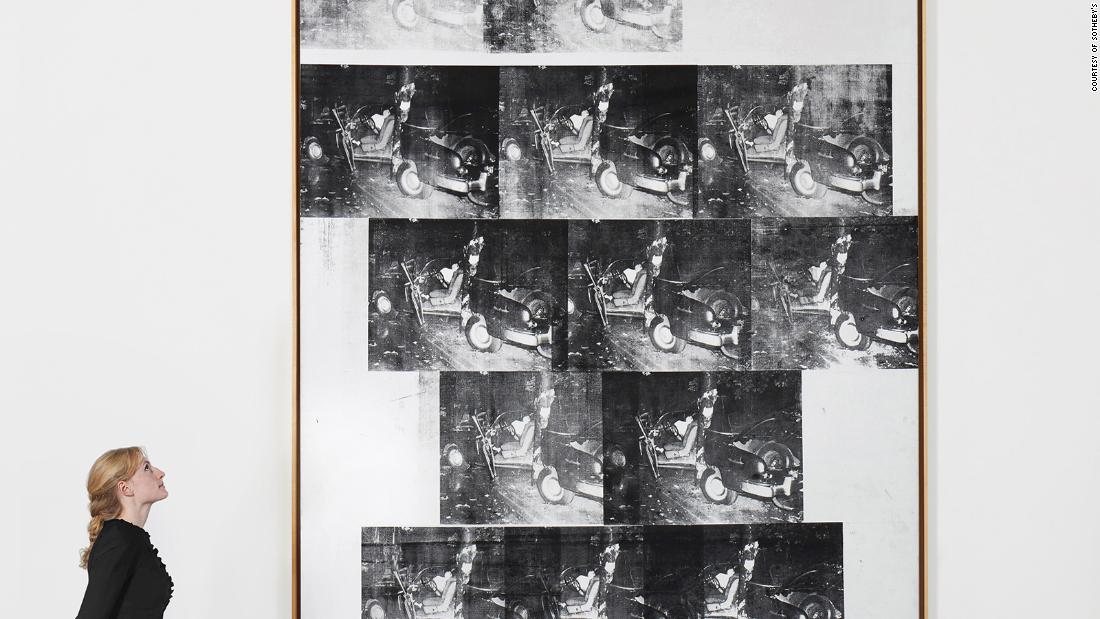 Andy Warhol may be best known for his pop art iconography of Marilyn Monroe, Chairman Mao and Campbell’s soup cans, but next month, a “haunting” silkscreen print of a mangled car crash will be up for sale at Sotheby’s in New York. Going under the hammer on November 16 during the auction house’s marquee week, it is expected to sell for upwards of $80 million, according to a press statement.

“White Disaster (White Car Crash 19 Times)” is a colossal image Warhol made in 1963 as part of his “Death and Disaster” series. At the time, Warhol had become transfixed with gruesome and morbid images — atomic bomb clouds, electric chairs — and how widely print publications reproduced them, believing that readers had become immune to their impact. Of all his work, the series most explicitly dealt with his fixation on human mortality.

In “White Disaster,” Warhol duplicated a single image of an automobile accident 19 times in black and white. At 12 feet tall and 6 feet wide, it is the largest of his car crash works.

“What distinguishes (the painting) is not only its immense scale, which really bewilders anybody who stands in front of it … but also its palette,” explained David Galperin, Sotheby’s head of contemporary art in New York, adding that Warhol repeated his image in the series in different tonalities, including lavender and orange. “It really seems to glow, the way that the black silk screen is registered against the sharp white background.”

“There is a power to feel dwarfed within this image,” said David Galperin, head of contemporary art at Sotheby’s New York. Credit: Courtesy of Sotheby’s

Galperin compared the piece’s scale and shape to religious altarpieces, referencing Warhol’s Catholic upbringing and the religious undercurrents in his work — particularly how religious icon paintings informed his celebrity portraits. Warhol worked on the “Death and Disaster” series at the same time that he was screenprinting his famous images of Monroe after her death in 1962.

“These ideas of celebrity, tragedy, fame, death — these are the themes that occupied Warhol and I think that the series he was working on simultaneously, the Marilyn paintings and the “Death and Disaster paintings, are intricately linked,” Galperin said.

In 2013, a smaller work from the series, “Silver Car Crash (Double Disaster)” sold at Sotheby’s for a record-breaking $105.4 million. It reigned as Warhol’s most expensive artwork until last year, when a 40-inch silkscreen of Monroe shattered the record for any American artist, reaching $195 million.

Leading up to the sale, “White Disaster” will exhibit at Sotheby’s New York from November 4-16. It has been held in a private collection for 25 years, and was previously owned by Heiner Friedrich, founder of Dia Art Foundation, and art dealer Thomas Ammann, according to Sotheby’s. It has appeared in major exhibitions about Warhol and pop art more broadly at Tate Museum in London, the Museum of Modern Art in New York, the Center Pompidou in Paris, and most recently, the Walker Art Center in Minneapolis.