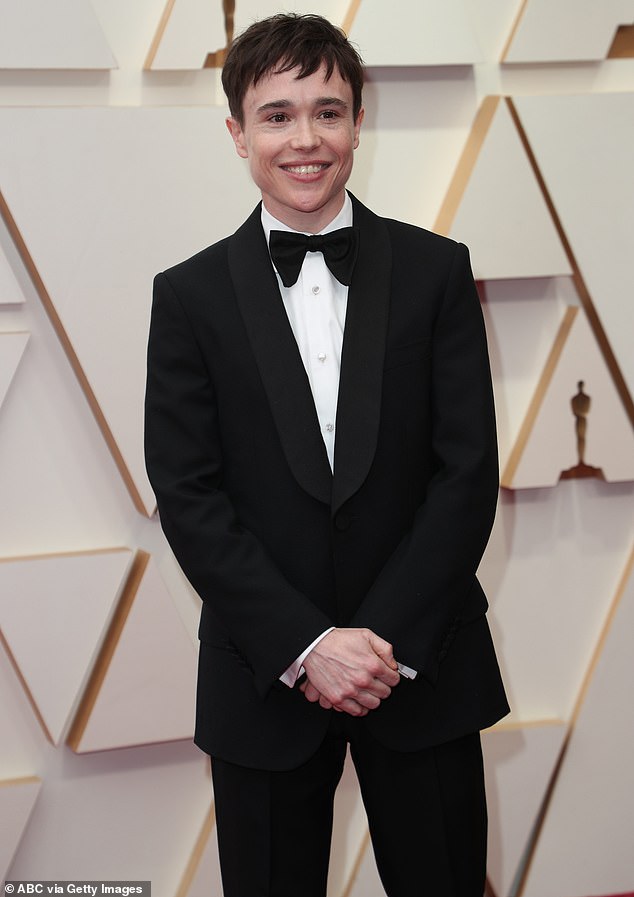 Elliot Page has opened up about his milestone appearance at this year’s Oscars, describing his ‘joy’ at being able to wear a tuxedo to the event – which marked his first Academy Awards since he came out as transgender in December 2020.

The 35-year-old Umbrella Academy star put on a dapper display on the red carpet at this year’s glittering awards ceremony, donning a classic black tuxedo by Gucci, before taking to the stage to mark the 15th anniversary of his breakout movie Juno alongside co -stars Jennifer Garner and JK Simmons.

But beyond marking the milestone of the movie that turned him into a Hollywood heavyweight, Page says his appearance at the Oscars also served as a significant personal step – describing it as a ‘special, wonderful, joyful moment’ during an Instagram Live interview to mark the start of the Trans Week of Visibility and Action on Monday.

Speaking specifically about the Academy Awards, the actor continued: ‘All those things are really special, wonderful, joyful moments where you’re looking at a photograph and it’s really cool to see yourself for the first time — or the person you already saw but here they are, like, they’re f***ing emerging.’ 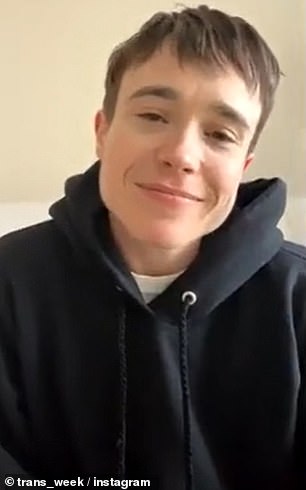 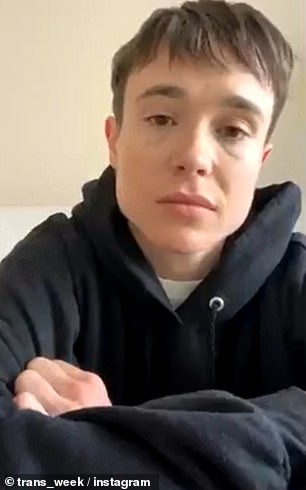 Speaking in an Instagram Live to mark the start of Trans Week of Visibility and Action (seen), Page, 35, described his Oscars experience as a ‘special, wonderful, joyful moment’ 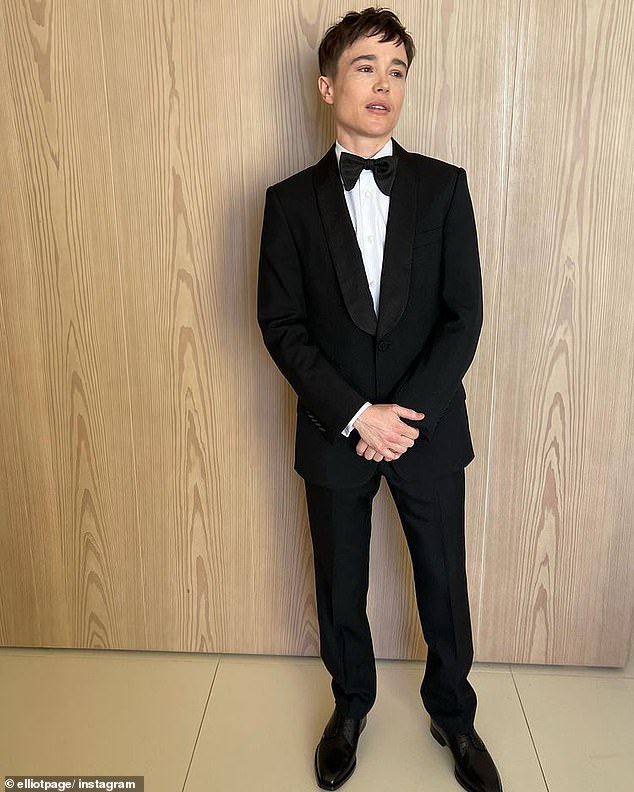 Page’s appearance at this year’s Oscars comes 14 years after he walked the red carpet as a Best Actress nominee, having earned the nod for his breakout role in the hit 2007 movie Juno.

At the time, Page wore a vintage Jean-Louis Scherrer dress – however he revealed in an April 2021 Oprah that the experience of wearing dresses on the red carpet was so ‘painful’ for him, he couldn’t stand to look back at the images of himself at the awards ceremony.

The actor, who previously stated that he had known he was a boy since he was a toddler, recalled to the TV host how, before puberty, being a ‘tomboy’ was ‘accepted’ — but upon reaching adolescence, it was less so, and having to wear girls’ clothing made him feel ‘ill’.

He added that he ‘couldn’t express just the degree of pain that I was in’ while promoting Juno, which came out in December 2007, and in which he portrayed a pregnant teenager preparing to give her baby up for adoption.

Page marked the 15th anniversary of the hit movie at this year’s Academy Awards, during which he praised the movie’s lasting impact on viewers, while recalling his own initial excitement at reading the script, which he said ‘had him hooked from the very first page’ .

‘Juno had me hooked from the very first page and was completely infused with [screenwriter] Diablo Cody’s distinctive voice. It was unlike anything I’d ever read before,’ he told the star-studded audience during the ceremony.

Jennifer, 49, agreed, chiming in: ’15 years ago, we all experienced the exhilarating feeling of reading a wholly original screenplay that felt new and exciting.’ 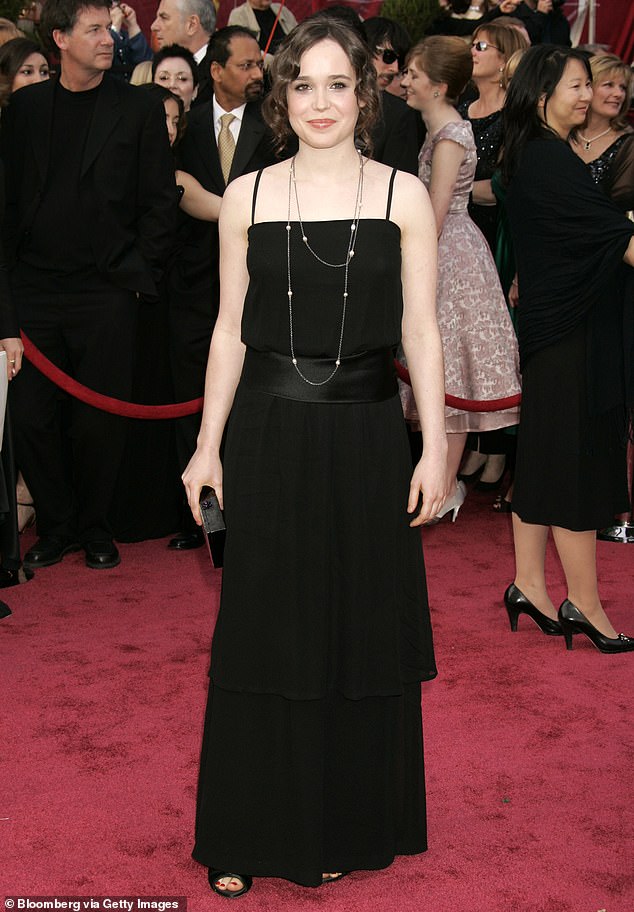 In an April 2021 interview with Oprah, Page described the ‘painful’ experience of having to wear dresses while promoting Juno – admitting he couldn’t stand to look at images of himself in the vintage Jean-Louis Scherrer dress he wore to the Oscars in 2008 (pictured)

‘I feel the best I’ve ever felt like, like, I feel the way that I really actually never thought was possible,’ Page said of his decision to come out as transgender

Meanwhile JK, who appeared as Juno’s father in the film, joked about the flick’s witty dialogue, noting: ‘There were definitely a couple phrases in there I’d never read before, like, “Your Eggo is preggo” and “pork swords” come to mind.’

The touching reunion comes almost 15 years after Juno premiered; the movie, which was released in December 2007, catapulted page to global stardom.

In the movie, the actor played the part of Juno MacGuff, a pregnant teenager who offers to give her baby up for adoption to a local couple, Mark and Vanessa Loring – played by Jason Bateman and Jennifer. 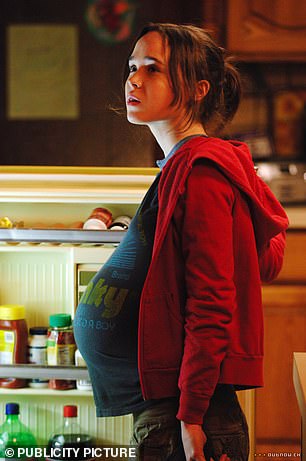 The actor shot to fame while starring in the title role of Juno MacGuff, a pregnant teen who wants to give her baby up for adoption to Jennifer’s character, Vanessa Loring

JK played the part of Juno’s father, Mac, while the her stepmother, Bren, was portrayed by Allison Janney.

The role landed page an Oscar nomination for Best Actress and saw him hailed as one of the brightest young stars in Hollywood. Major movie roles in X-Men: Days of Future Past and Inception — in which he starred alongside Leonardo DiCaprio — followed.

However, while the actor’s career was going from strength to strength, behind the scenes he was struggling with his gender identity – revealing to Oprah in 2021 that he eventually ‘lost it’ in 2010 after being presented with three dresses to wear to the Paris premiere of his movie Inception.

He then ‘collapsed’ in what was likely a ‘panic attack’ when he arrived back from the after party.

In his latest Instagram Live appearance, Page reflected back on the ‘challenges’ that he has gone through to reach a place where he now finally feels his ‘best’ – while shedding light on the severe struggles faced by so many transgender people, particularly those who do not have the same ‘privilege’ that he enjoys.

‘I know the challenges I’ve gone through and I know how difficult it has been for me, how close I’ve come to… you know,’ he said. 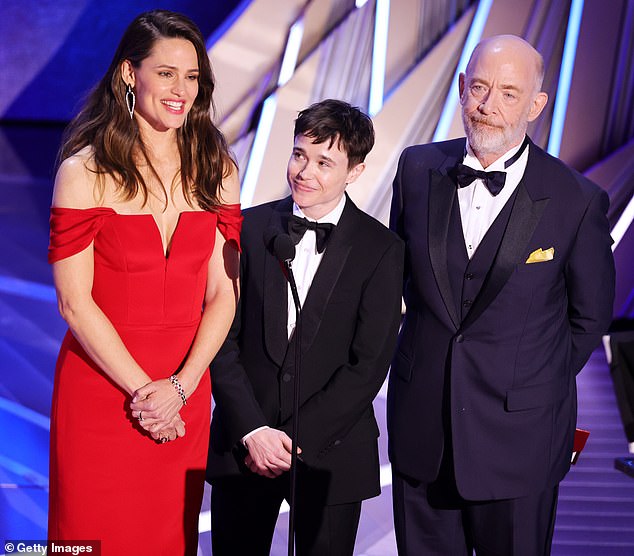 Page shared a touching moment on-stage when he reunited with his Juno co-stars, Jennifer Garner and JK Simmons, with all three paying tribute to the movie’s 15th anniversary 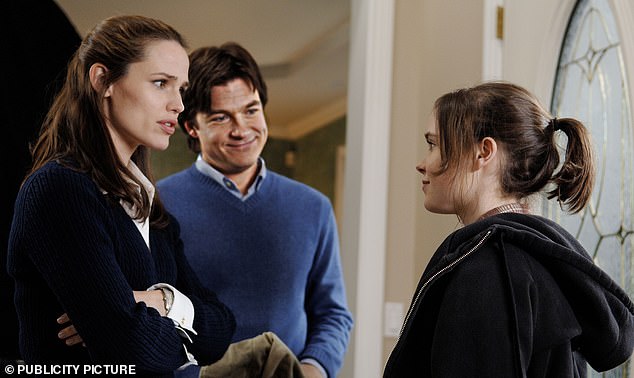 Juno, which was released in December 2007, shot Elliot (seen in the movie with Jennifer and Jason Bateman) to global fame and even earned him an Oscar nomination for Best Actress

Speaking about anti-trans bills in places like Arizona, Page warned of the severe and ‘painful’ toll that they will have on transgender youth, noting that he is continually working on ways to use his ‘platform’ in order to raise awareness and support for the community.

Before arriving at the Oscars, Elliot took a moment to advocate for transgender rights on his Instagram account, sharing a series of posts about the Trans Week of Visibility + Action, a digital campaign to fight anti-trans legislation across the US

In the two and a half years since he himself came out as trans, Elliot has become an outspoken advocate for transgender rights, using his own experiences to highlight the importance of support for trans youngsters the world over.

During his interview with Oprah last year, he opening up about his ‘life-changing’ top surgery, explaining that the result of the procedure – which is typically performed on transgender men who have started undergoing hormone therapy – ‘completely transformed his life’.

‘Getting out of the shower and the towel’s around your waist and you’re looking at yourself in the mirror and you’re just like, “There I am,” ‘he said, getting choked up. ‘And I’m not having the moment when I’m panicked. I’m not having all these little moments that used to be — just being in a T-shirt. It’s being able to touch my chest.’

He also stressed the need to demonstrate to others just how important this surgery can be — particularly ‘because there is such an attack on trans health care right now, when already there is such a lack of access or trans people who don’t even want to go to the doctor.’