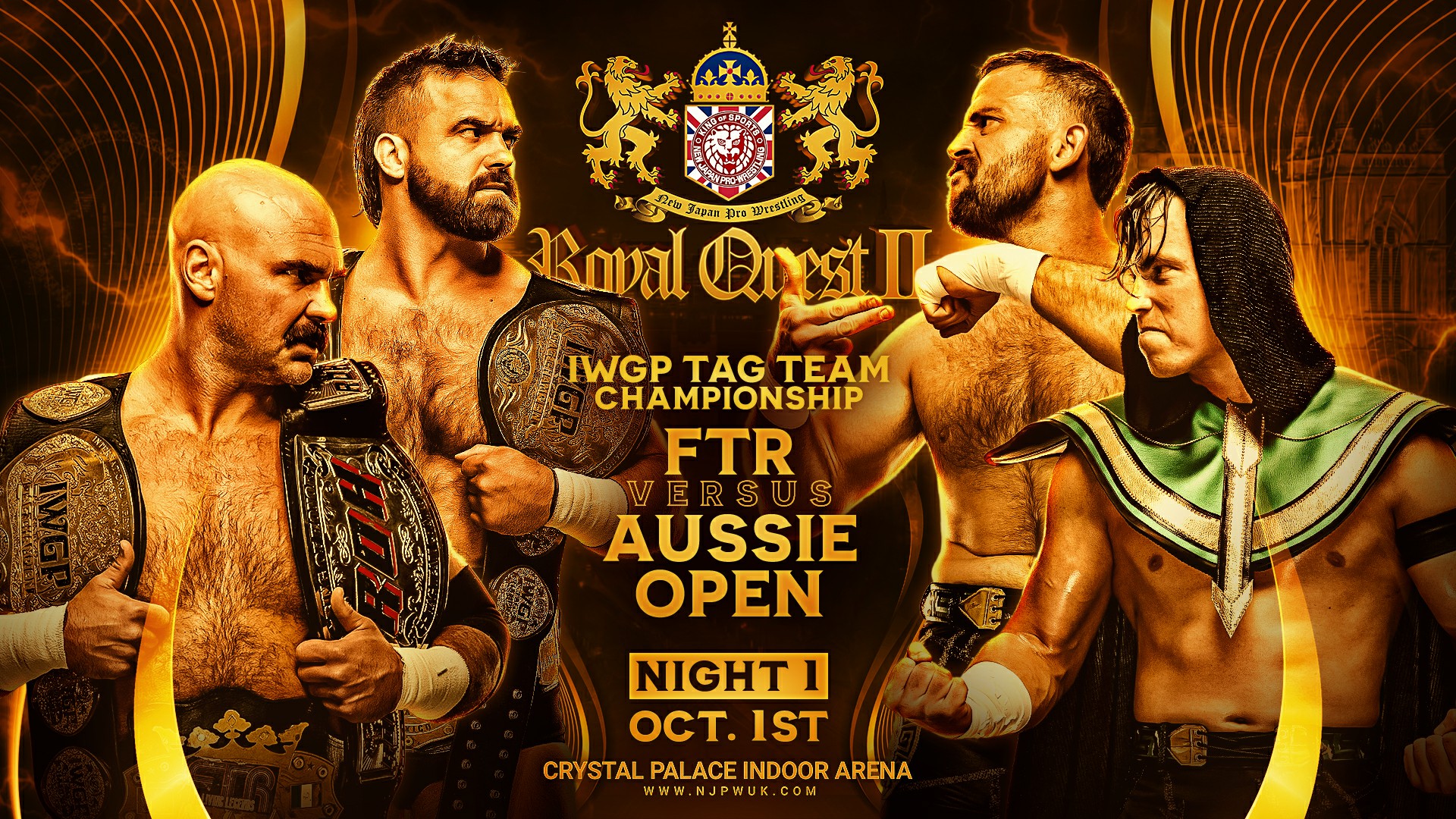 The full card has finally been set for Royal Quest next weekend at Crystal Palace, London. With the IWGP Tag Team Championships in the headline spot, a big card of eight matches is on deck for NJPW’s return to the UK after over three years away.

Night one is SOLD OUT!

Watch Royal Quest II in English on demand on NJPW World this October!

IWGP United States Champion Will Ospreay will face Shota Umino in a non title special singles match to headline on October 1. Ospreay and Umino resume a vicious feud from last autumn in RevPro, when Umino came up just short in a memorable challenge to then British heavyweight Champion Osprey. In the intervening year, Umino has been dedicated to testing himself both in the UK, and in the US, where competition at Windy City Riot, Forbidden Door and NJPW STRONG has wowed fans and helped his progression continue apace. Can he topple the Commonwealth Kingpin and earn the biggest victory of his young career?

The semi main event will see FTR defend the IWGP Tag team Championships for the first time against STRONG Openweight Tag team Champions Aussie Open. After Dax Harwood and Cash Wheeler won the titles in a three way bout at Forbidden Door, relieving the United Empire’s Great-O-Khan and Jeff Cobbof the gold in the process, Kyle Fletcher and Mark Davis are stepping up in their teammates stead. Helping their case was a six man tag team victory in Nashville back in July, a win that led Fletcher to call out FTR on the microphone and issue a challenge that is now finally accepted.

With tag team competition in NJPW hot in the US and Japan, the UK presents neutral ground for both of these teams on paper, but in practice the London crowd will be 100% behind the Australian born but British made tag team. Three years removed from Aussie Open’s first big stage test against the Guerrillas of Destiny at the first Royal Quest, will triple crown title holders FTR have their reign cut short in Crystal Palace? 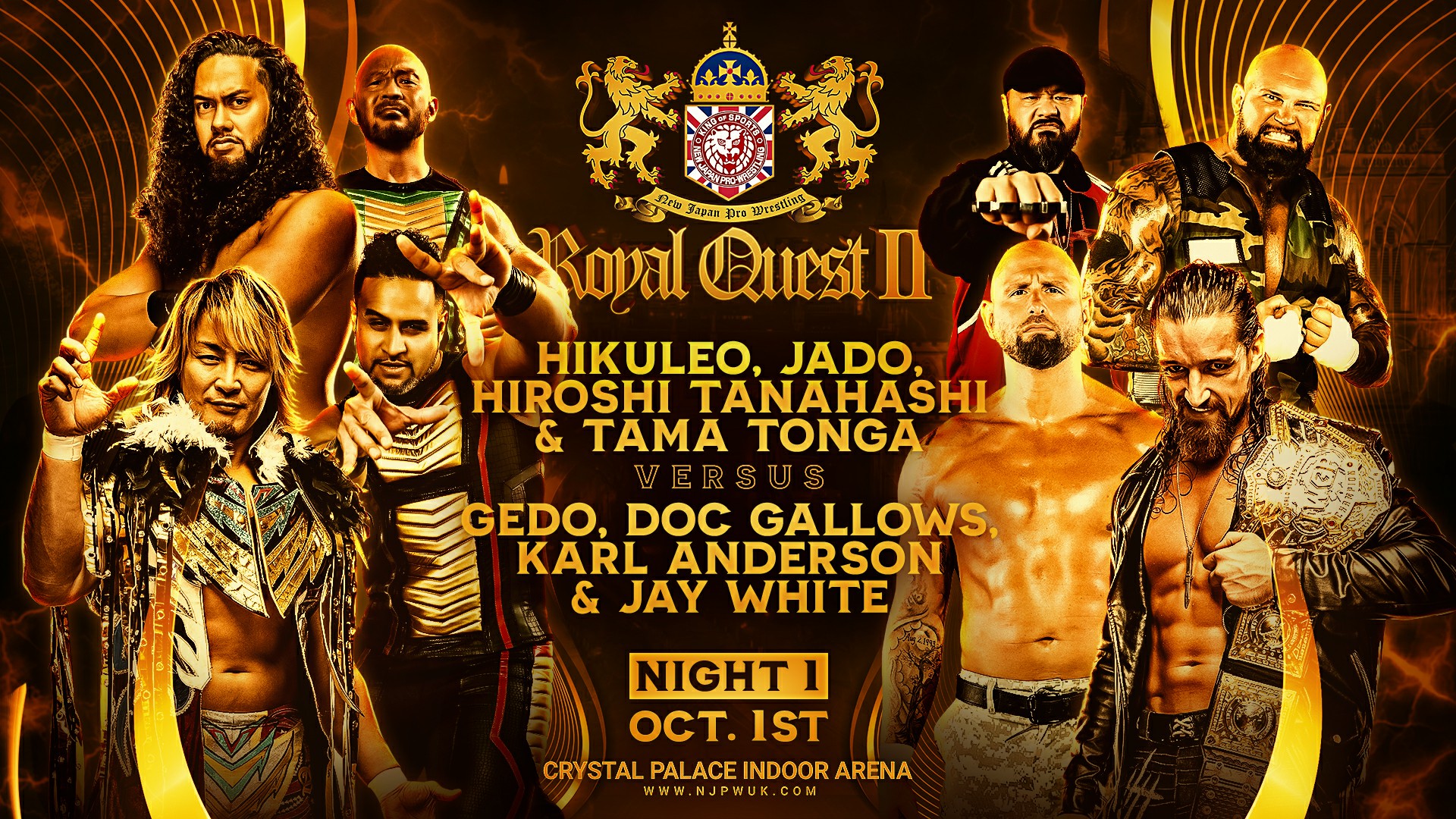 Eight man action will see the BULLET CLUB side of Jay White, Karl Anderson, Doc Gallows and Gedo face off against Hiroshi Tanahashi, Tama Tonga, Jado and Hikuleo. After the events of Kobe World Hall September 25, Hontai have a big time new addition in the form of Hikuleo, who sided with his brother Tama Tonga in the face of Jay White, and put himself potentially in line for Anderson’s NEVER gold. Meanwhile the bad blood surrounding Anderson and Hiroshi Tanahashi continues after Sunday’s NEVER Openweight Championship match, and Tama Tonga and Jay White want another shot against one another before Declaration of Power on October 10 in Ryogoku. 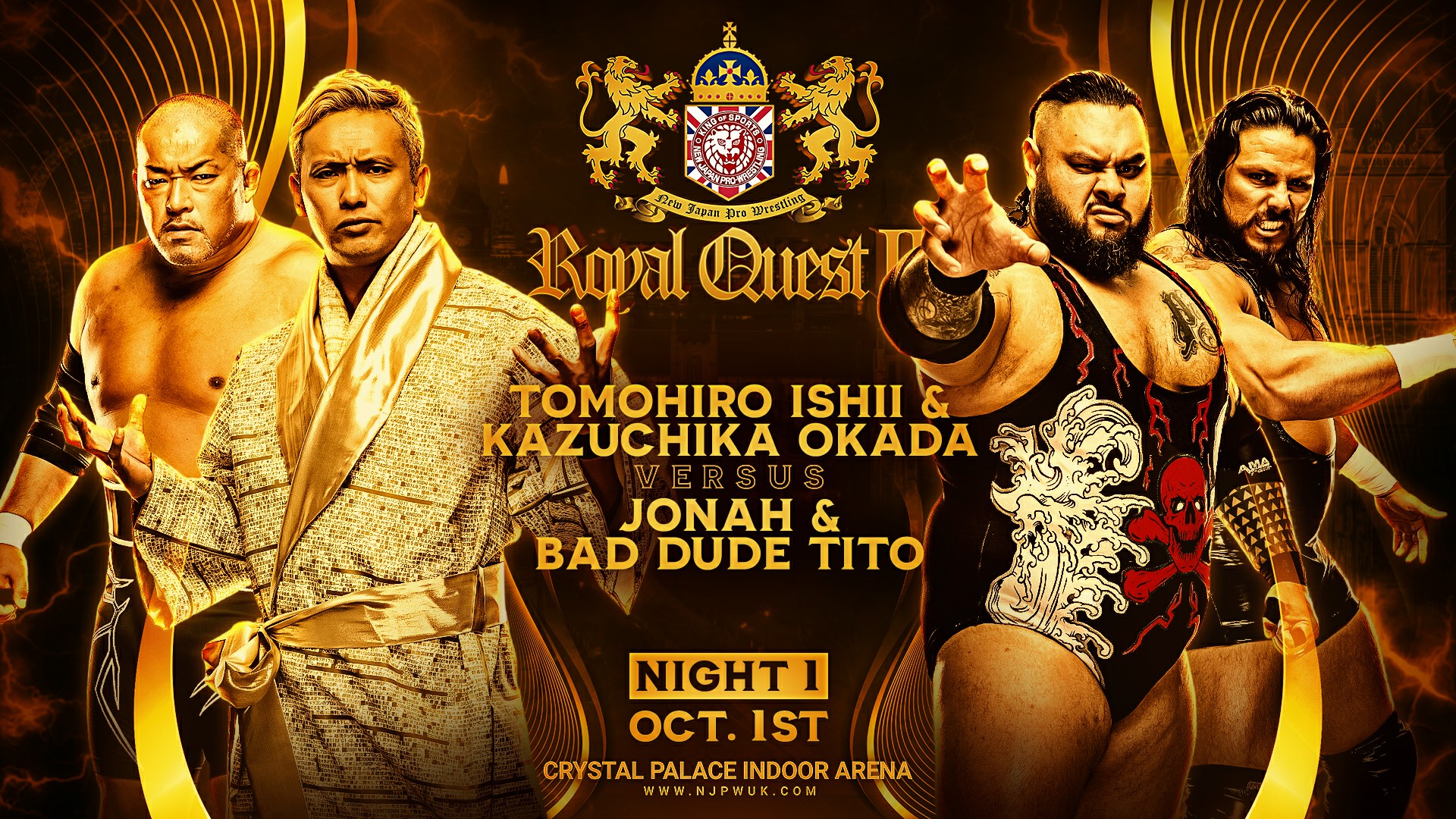 CHAOS and TMDK continue to go to war on night one in London. With night two set to see Kazuchika Okada take on Bad Dude Tito while Tomohiro Ishii faces JONAH one on one, night one will see the two sides in tag team action. Will it be Okada or JONAH making a Declaration of Power in London? 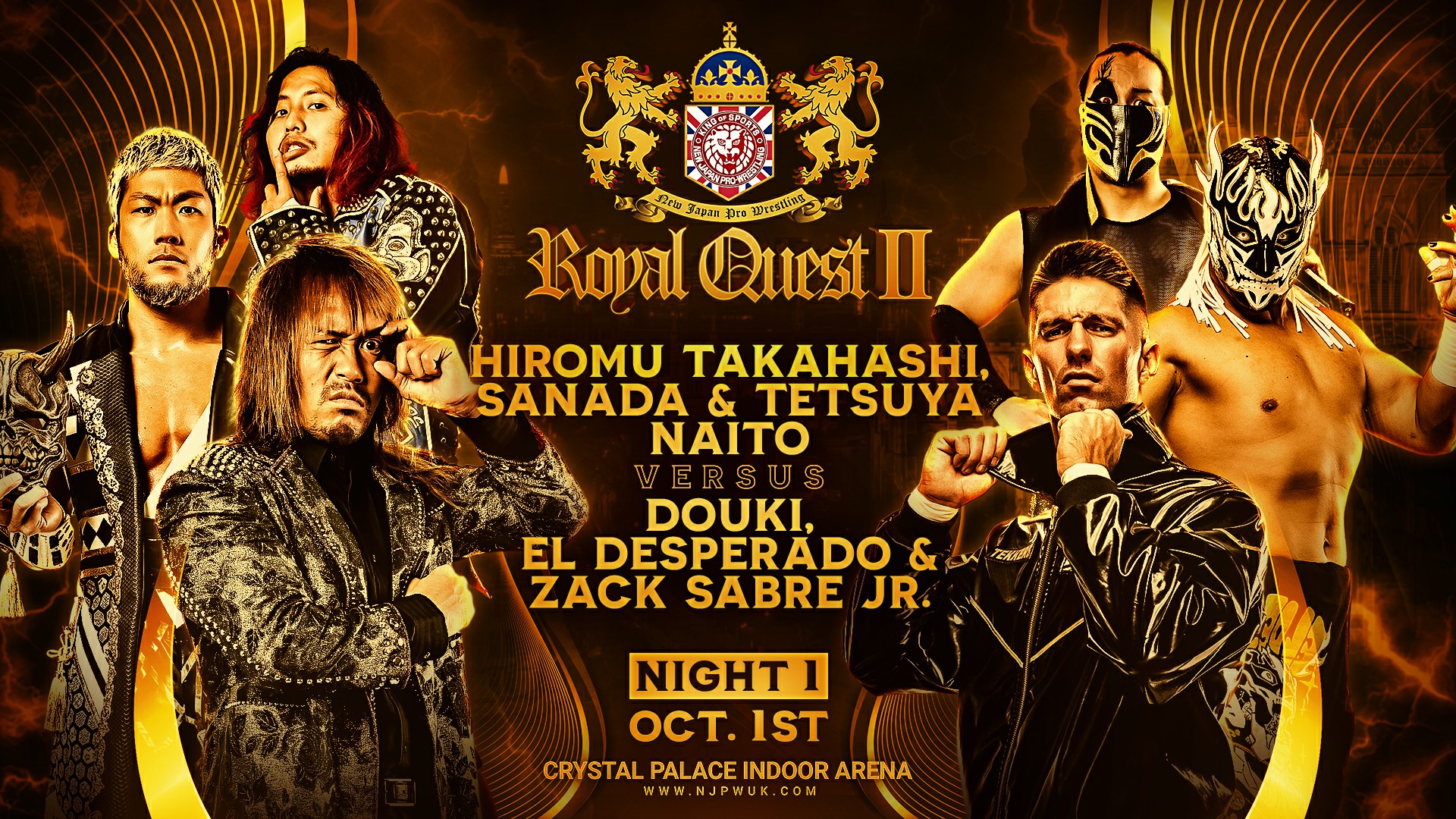 Six man tag team action will see a special preview of Sunday’s main event in London. Before Tetsuya Naito and Zack Saber Jr. meet one on on in the headline spot on October 2, ZSJ will lead El Desperado and DOUKI to battle as Naito takes SANADA and Hiromu Takahashi to the ring. A trios match full of wildly popular members of their respective factions should create a heady partisan atmosphere in Crystal Palace, but who comes out on top? 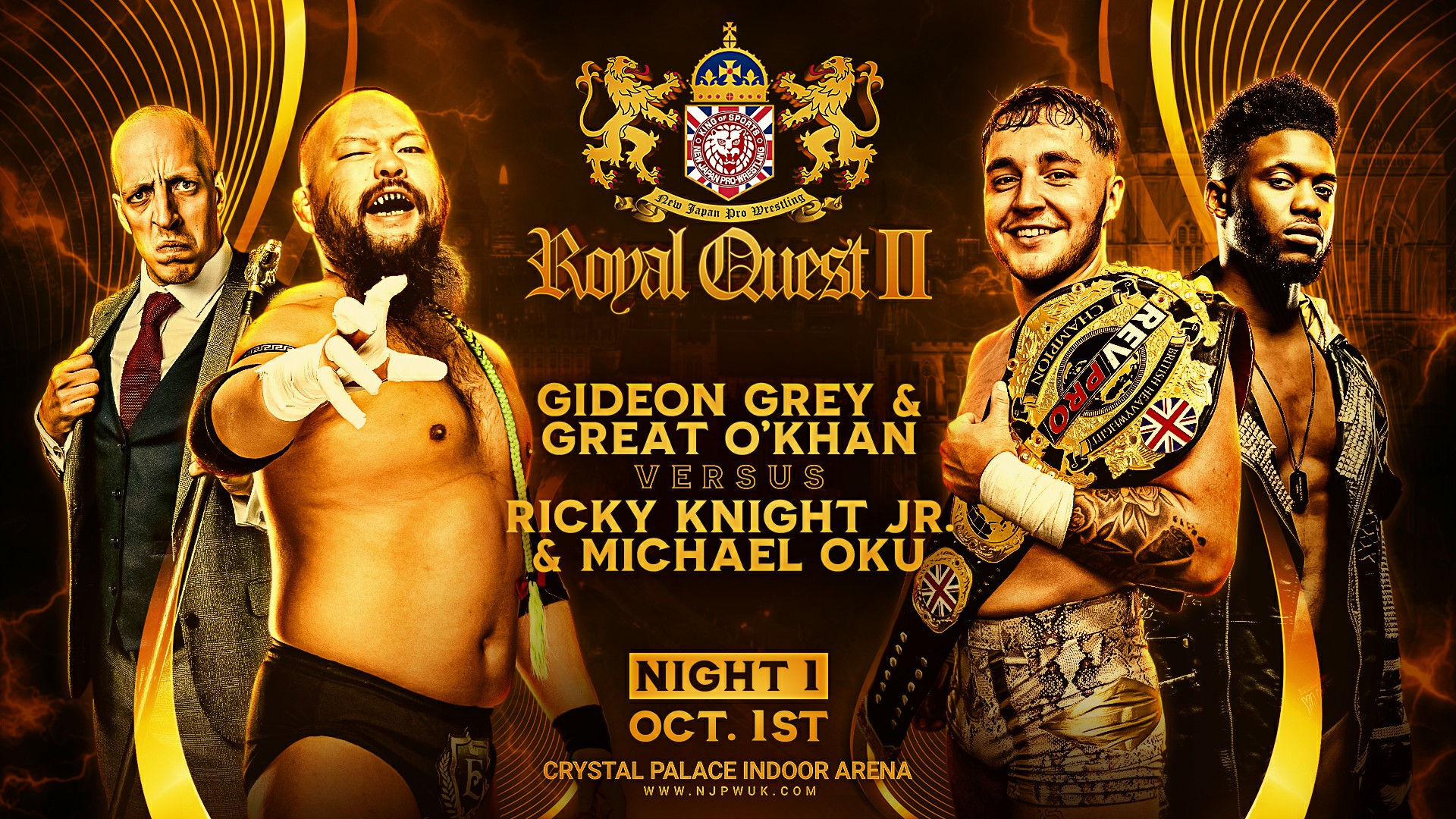 Great-O-Khan will have a flashback to his early days in the UK in Gideon Grey’s Legion on night one, as the duo will take on the impressive young pair of Ricky Knight Jr. and Michael Oku. After over a year of pursuing Will Ospreay and the British heavyweight Championship, RKJ finally achieved his goal at RevPro’s recent Anniversary Event, and will now have another big time opportunity ahead of him, as will former British J-Cup winner and former Cruiserweight Champion Michael ok. The best of British will be taking on the best of the United Empire, and they’ll be looking to make a significant mark in London. 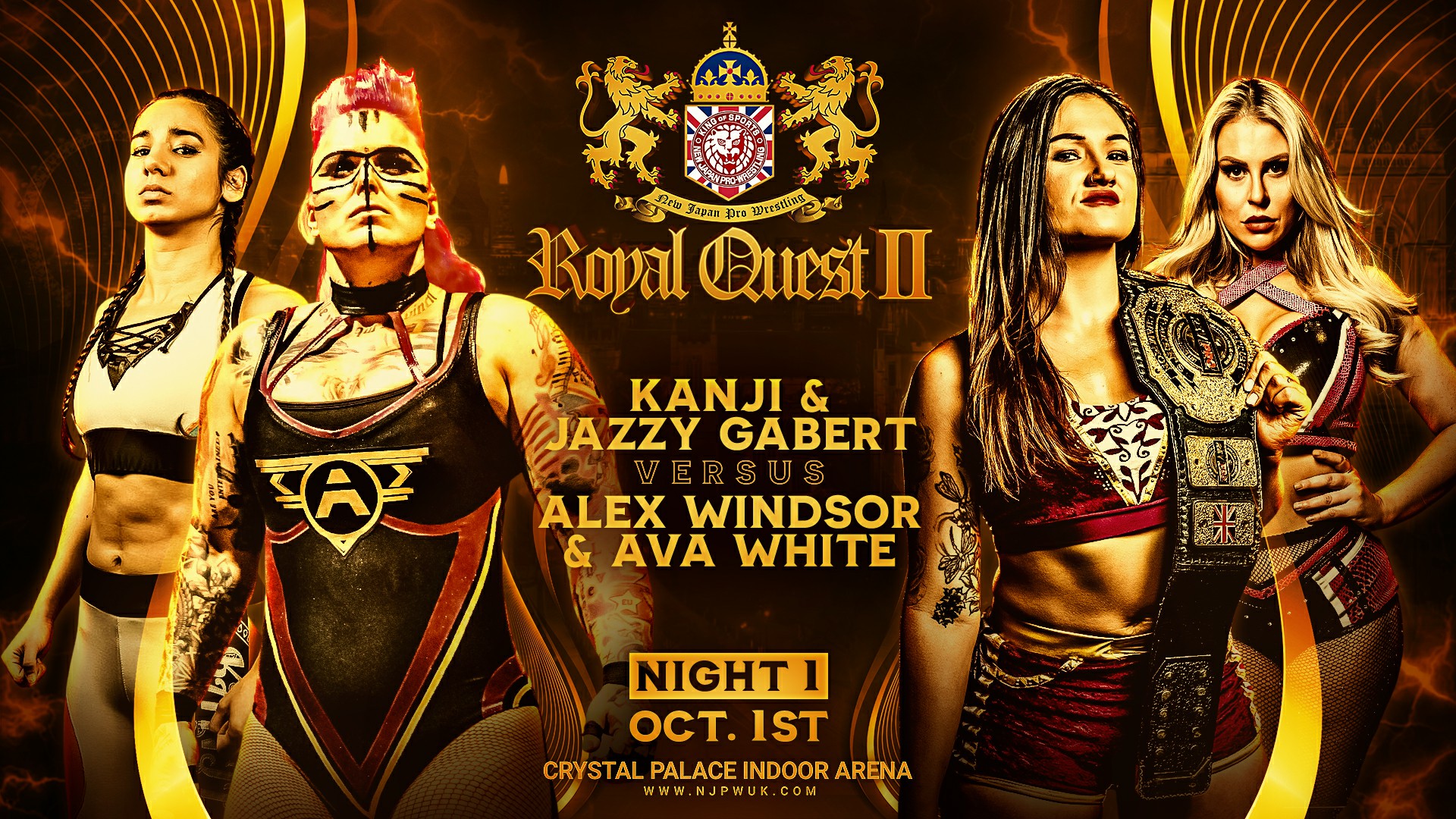 Tag team action will see a preview of night two’s IWGP Women’s Championship tournament match when the Alpha Female Jazzy Gabert teams with Kanji to face British Women’s Champion Alex Windsor and Gabert’s night two opponent Ava White. Former World of STARDOM Champion Gabert is the odds on favorite for night two’s tournament bout, but White is not about to back down from any opposition and has the best of partners in her corner in the form of British champion Windsor. Meanwhile, four year per Kanji has been impressing in RevPro, EVE and PROGRESS on a consistent basis, and is looking to have a breakout performance on night one of Royal Quest. 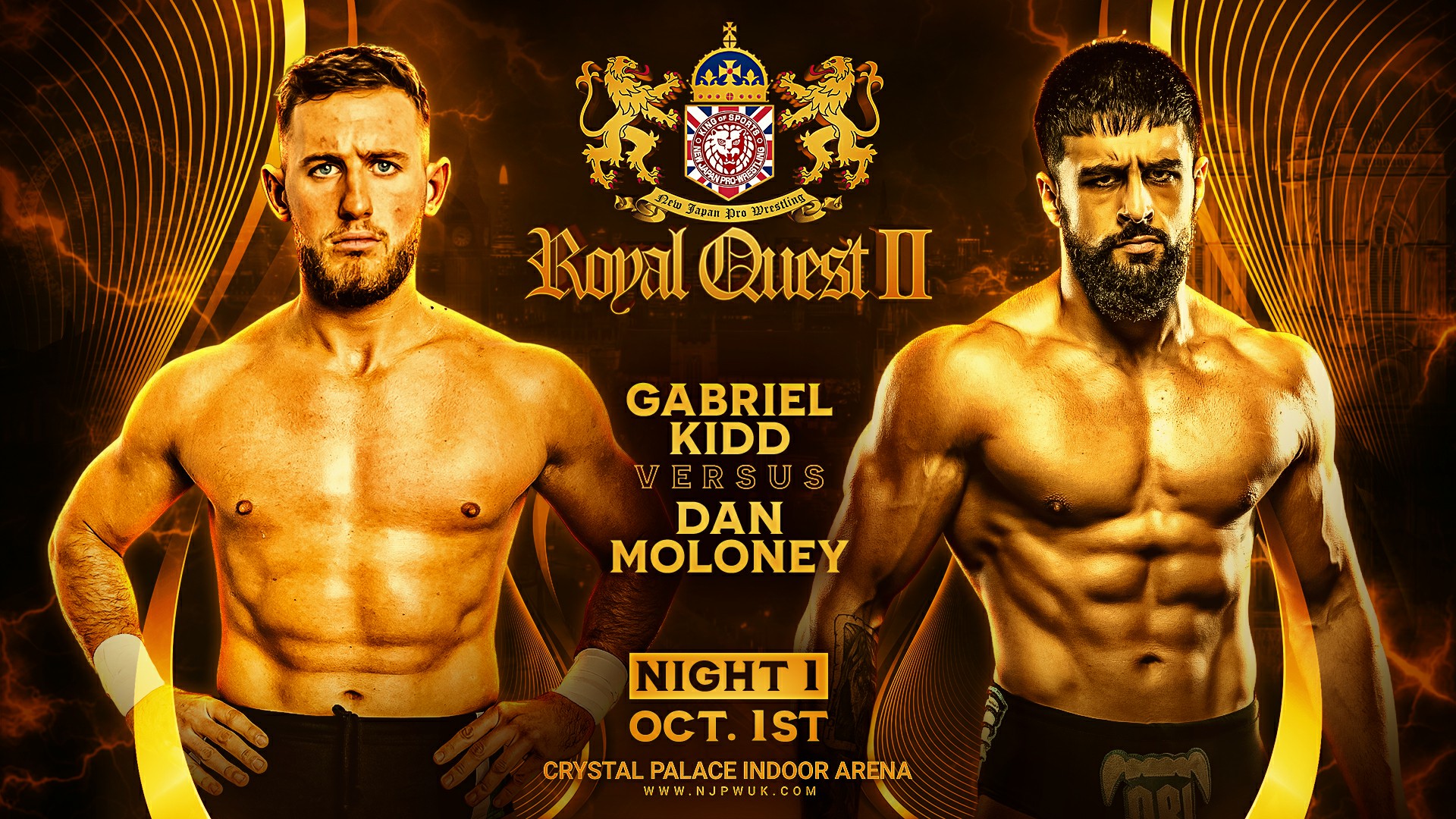 Gabriel Kidd will be making his return to NJPW competition for the first time since battling Fred Rosser in Seattle earlier this year when he faces Dan Moloney. Moloney and Kidd are no strangers to one another, having faced off back in May at RevPro’s Epic Encounters event; now Kidd wants to make a definite point that he’s back for the long haul, while Moloney wants to make his own breakout statement in the battle of two 25 year old sure fire future prospects.