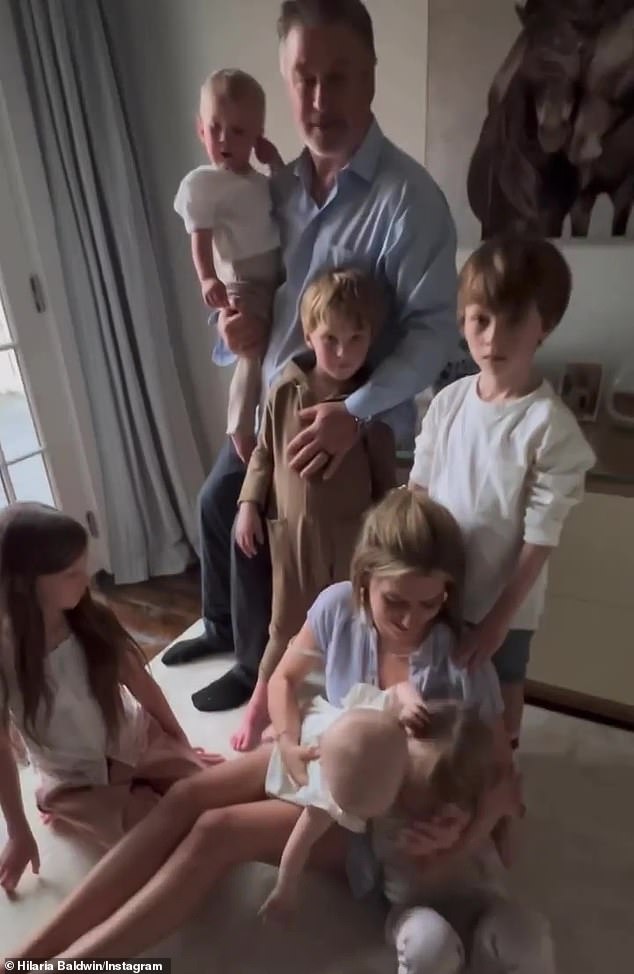 Hilaria Baldwin has revealed she is pregnant with her seventh child with husband Alec Baldwin, just months after the actor became embroiled in a devastating tragedy when he accidentally shot dead a crew member on the set of his movie Rust.

The 38-year-old shared the news on her Instagram on Tuesday, posting a video of herself and Alec, 63, playing with their six children after sharing their happy news with their brood.

The announcement comes just five months after Alec’s fatal shooting of cinematographer Halyna Hutchins on the Rust set, something that Hilaria alluded to in her Instagram caption, which referred to their unborn child as a ‘bright spot in their lives’.

‘After many ups and downs over the past few years, we have an exciting up and a huge surprise: another Baldwinito is coming this fall,’ Hilaria wrote.

Hilaria, who suffered two miscarriages before welcoming her fifth child, Edu, admitted that she didn’t think anymore children were in her future, explaining that the news of her latest pregnancy came as something of a ‘surprise’ for the family.

Surprise: Alec Baldwin and wife Hilaria have revealed they are expecting a seventh child together just five months after the actor’s fatal Rust shooting 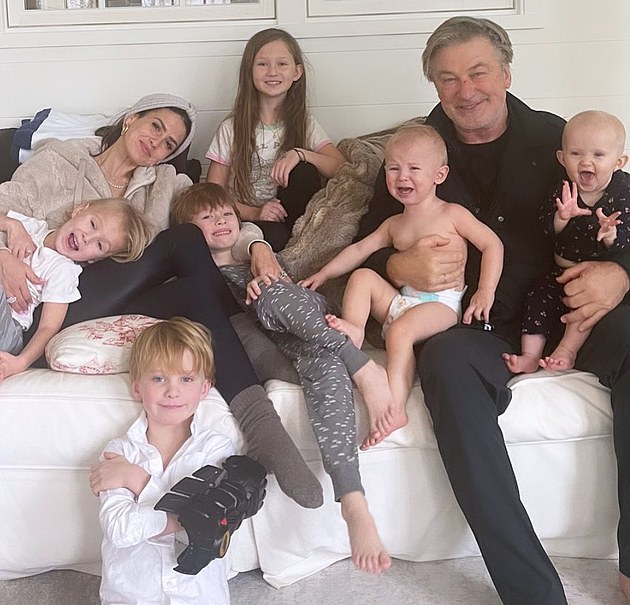 ‘We were pretty sure our family was complete, and we’re beyond happy with this surprise,’ she continued, before saying of the video post: ‘I’m sharing with you the moment we told the kids – as you can see, they are super excited!’

The post, which Alec also shared on his own Instagram account, went on to reference the ‘uncertain times’ that the Baldwins have faced – including, no doubt, the ongoing investigation into the on-set death of Hutchins last year.

‘Our new baby is a very bright spot in our lives,’ Hilaria – who announced earlier this month that she was taking a break from social media – wrote. 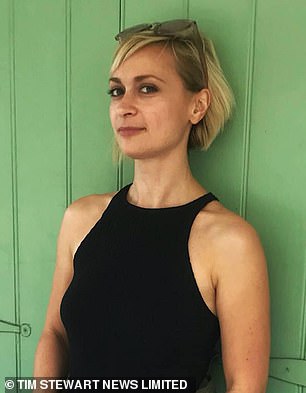 ‘A blessing and a gift during such uncertain times. I’ve missed you during my break from social media…I’m back and looking forward to continuing with you this wild journey that we call “life.” Our love to you and your loved ones.’

Last year, Hilaria and Alec shocked their fans by announcing the arrival of their sixth child, Lucía, via surrogate just six months after the yoga guru gave birth to her fifth baby Edu following two miscarriages.

She shared her devastating news in April 2019, when she took to social media to document her miscarriage in a series of very candid photos and videos, the first of which showed her posing in her underwear, alongside a caption which read: ‘I want to share with you that I am most likely experiencing a miscarriage.’

Hilaria went on to document subsequent doctors’ appointments, and even shared selfies from her D&C procedure.

In November of that same year, she revealed that she’d had a second miscarriage, four months into her pregnancy, once again sharing the news on Instagram alongside an image of herself and daughter Carmen. 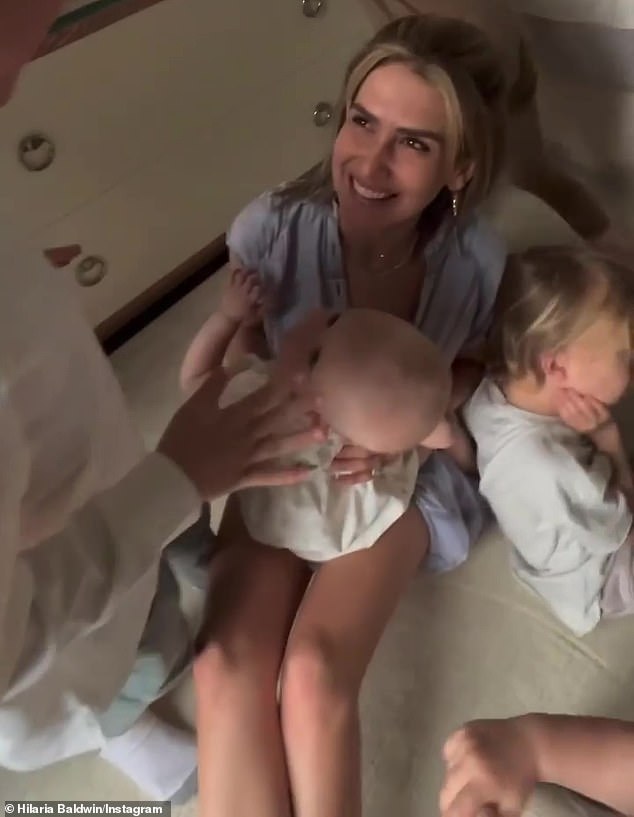 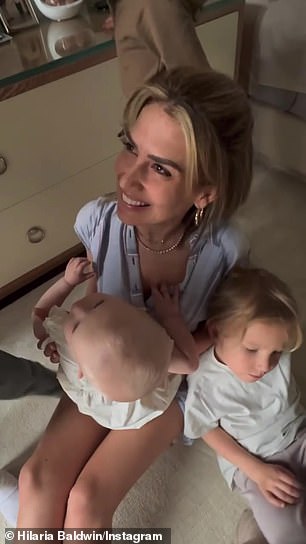 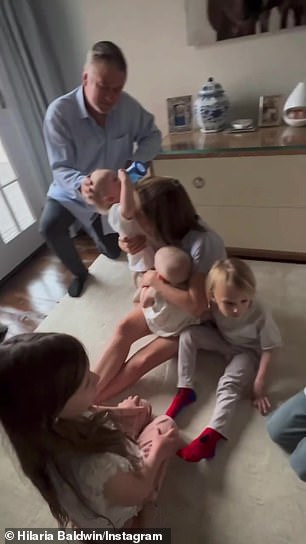 Big brood: Hilaria shared this video of her family celebrating the news on Tuesday

‘We are very sad to share that today we learned that our baby passed away at 4 months,’ she wrote. ‘We also want you to know that even though we are not ok right now, we will be. We are so lucky with our 4 healthy babies – and we will never lose sight of this.

This week, Alec was spotted getting back to work as an actor, with pictures showing him reading through two film scripts in Italy after the fatal Rust accident last October.

Sitting outside a bar in the Italian city, Alec looked disheveled as he ate alone while reading his annotated script.

The actor is said to have been in talks to work on two Italian films – Kid Santa and Billie’s Magic World – before the Rust incident took place.

Billed as ‘live-action/animation family Christmas comedies,’ the films are being produced by Alec and his brother Daniel Baldwin, who is also starring in them.

The actor was holding a Colt .45 while preparing for a scene at a ranch near Santa Fe, New Mexico, on October 21 when his gun went off, killing cinematographer Halyna Hutchins and wounding the film’s director, Joel Souza. 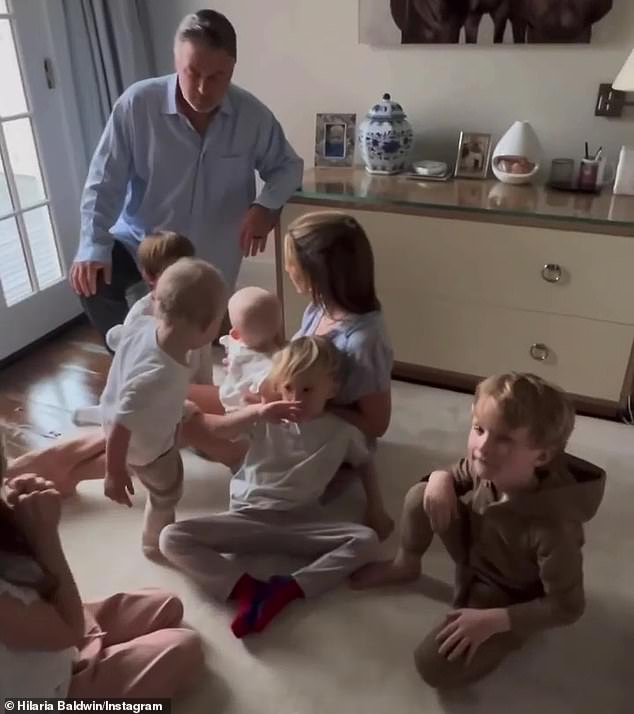 Announcement: The 38-year-old shared the news to her Instagram on Tuesday, posting a video of herself and Alec, 63, playing with their six children 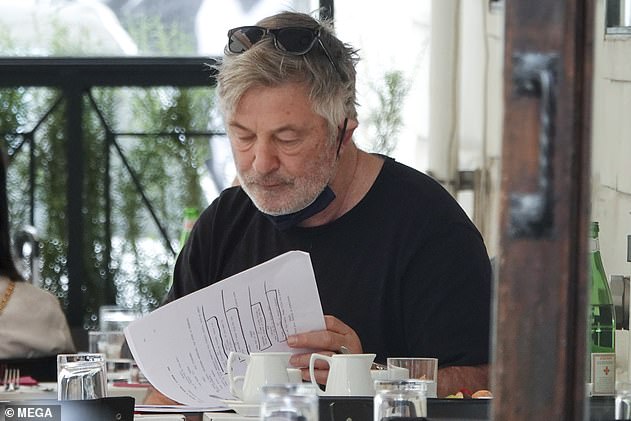 Working: Alec has been pictured this week preparing for a new movie, five months on from the death of Halyna Hutchins, the cinematographer who was killed on the set of his film Rust

Alec said in a December interview with ABC News that he was pointing the gun at Hutchins at her instruction on the set of the Western when it went off without his pulling the trigger.

Charges haven’t yet been filed in the ongoing criminal investigation by the Santa Fe County Sheriff’s Office.

Matthew Hutchins, the widower of the cinematographer, filed a wrongful death lawsuit against Baldwin and others in the film in February.

In an interview with NBC in February, Matthew said: ‘I was just so angry to see him talk about her death so publicly in such a detailed way and then to not accept any responsibility after having just described killing her.’

Matthew, a Harvard-educated lawyer, told Today in an interview that he felt the majority of the blame lay with Alec.

Alec, in the December interview, said: ‘Someone is responsible for what happened, and I can’t say who that is, but it’s not me.’

Matthew said: ‘The idea that the person holding the gun and causing it to discharge is not responsible is absurd to me.

‘But gun safety wasn’t the only problem on that set. There were a number of industry standards that were not practiced and there’s multiple responsible parties,’ he added.

Meanwhile, Hilaria has been on and off social media since her husband’s Rust shooting scandal, and her own controversy for faking her Spanish heritage – which she apologized for last year.

Candid: Hilaria even documented her two miscarriages on social media, revealing in April 2019 that she ‘was most likely’ losing her unborn child while sharing an image of herself in lingerie

The influencer, whose real name is Hillary Hayward-Thomas, finally said ‘sorry’ for the saga in a post shared to her Instagram account on February 5 last year – six weeks after a Twitter thread about her faux European background went viral.

Hilaria stopped short of confessing she had misled people about her Spanish roots instead doubling down on her previous claims that she was raised ‘with two cultures, American and Spanish’ and that she feels ‘a true sense of belonging to both’.

In a caption alongside a photo of her with Alec and their five children, she wrote: ‘I’ve spent the last month listening, reflecting, and asking myself how I can learn and grow.

‘My parents raised my brother and me with two cultures, American and Spanish, and I feel a true sense of belonging to both.

‘The way I’ve spoken about myself and my deep connection to two cultures could have been better explained – I should have been more clear and I’m sorry.

‘I’m proud of the way I was raised, and we’re raising our children to share the same love and respect for both. 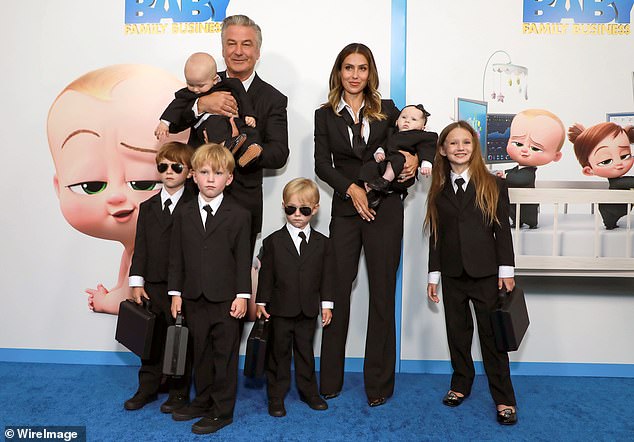 At the end of December 2020, it emerged that Hilaria – who in the past claimed to have grown up in Majorca and spoke with a Spanish accent – actually spent her childhood in Beacon Hill, Boston, and went by Hillary.

It started with a single tweet on December 21 which read: ‘You have to admire Hilaria Baldwin’s commitment to her decade long grift where she impersonates a Spanish person’.

The woman then continued to post videos and proof of how Hilaria’s accent has changed over the years.

Several former classmates came forward to confirm that Hilaria was in fact raised in Weston, Massachusetts, by American parents without a hint of a foreign accent.

In the wake of the scandal, Hilaria took a break from social media and retreated to the Baldwins’ home in East Hampton, where she was staying with her children, while Alec was renting a nearby property so that he could quarantine away from his family and commute back and forth to the city for work.

Since apologizing for the scandal on social media, Hilaria has been sharing much more regular updates, frequently posting candid images and videos of life at home with Alec and the kids – however she made no hints that the couple were planning to welcome a sixth child into their brood.