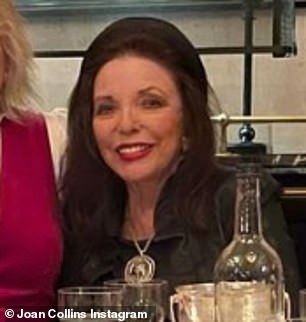 Dame Joan Collins, 89, debuts a brand new look after ditching her trademark wavy hair for a sleek and straight style while out for dinner with friends

By Lizzie May For Mailonline

Dame Joan Collins looks unrecognizable in her sleek and straight new hair while out for a fancy dinner with friends.

Best known for oozing Hollywood glamor wherever she goes, Joan, 89, ditched her signature big, voluminous hair for a just as gorgeous straight style.

She posed for a picture with her good friends on Saturday night with her chocolate tresses worn in a lustrous beehive and a flawless face of make up. 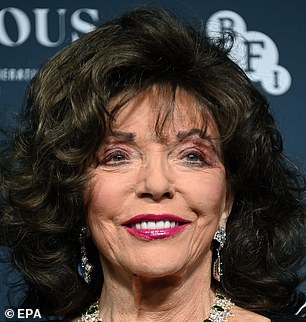 New do: Joan Collins looks unrecognizable in her sleek and straight new hair do while out for a fancy dinner with friends on Saturday night (pictured, and right, her typically big hair)

Her locks cascaded over her shoulders in a bouncy wave and she wore a black ruffled jacket with a black top.

To accessorise she wore a statement silver pendant necklace which stood out from the all black ensemble.

Her bright pink lip color stood out as she beamed for a snap with her close friends for some good food and a night out.

In the snap was her husband Percy Gibson, 58, the parents of supermodel Cara Delevigne Pandora and Charles Delevigne, and writer Louise Fennell. 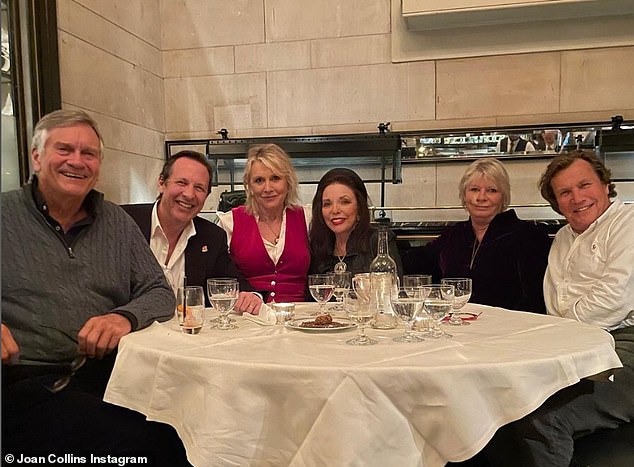 Saturday night fun: She posed for a picture with her good friends on Saturday night with her chocolate tresses worn in a lustrous beehive and a flawless face of make up

Several fans spotted the change of look, with one writing: ‘Joan you look so young x’, while another added: ‘Your hair looks fabulous down like this.’

Her appearance comes after Joan recently admitted she ‘hated’ the way her body was changing during puberty and ‘rebelled’ by wearing boy’s clothes.

Joan told Saga Magazine: ‘I remember going through puberty at 14 and hating the way my body was changing.

Adoring: Several fans spotted the change of look, with one writing: ‘Joan you look so young x’, while another added: ‘Your hair looks fabulous down like this’

‘I hated everything that was happening. So I rebelled and wore boys clothes. I wore corduroys and scraped my hair back. I even went to football matches with my father.’

When asked about changing her mind about wanting to be a boy, she said: ‘I think when I went on holiday to France when I was around 15,’ she laughed: ‘When they discovered me!’

Since then, Joan has caught the eye of many desirable men including handsome husband Percy. 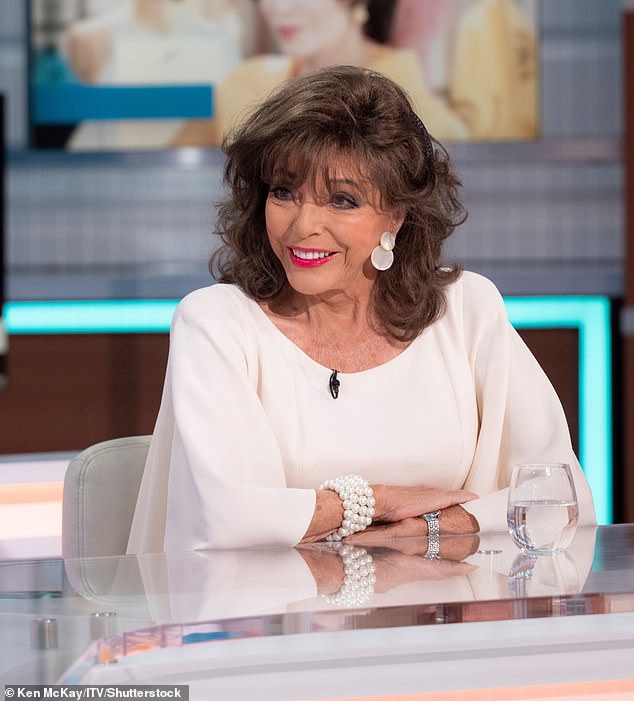 She was first married to late film star Maxwell Reed in 1952.

The star then went on to marry British pop star Anthony in 1963, with whom she shares two children, Tara and Alexander, now 58 and 56.

The couple divorced after six years, and she went on to marry her third husband Ron Kass in 1972. The two welcomed daughter Katyana, 49, that same year.

The couple were divorced in 1983, and Collins went on to meet her fourth husband, Scandinavian singer Peter Holm, at a party. They wed in 1985 but split just two years later in 1987.

The former Dynasty actress and husband Percy celebrated his 58th birthday a few weeks ago.

Sharing to her 292,000 Instagram followers, she wrote to her beloved Percy: ‘Wishing my wonderful gorgeous husband a fabulous birthday full of surprises! I love you darling.’

Joan, who celebrated her 20th wedding anniversary with Percy earlier this year with a lavish party at Claridges, was airlifted to Monaco hospital from St Tropez earlier this year after suffering from a pinched nerve in her leg. 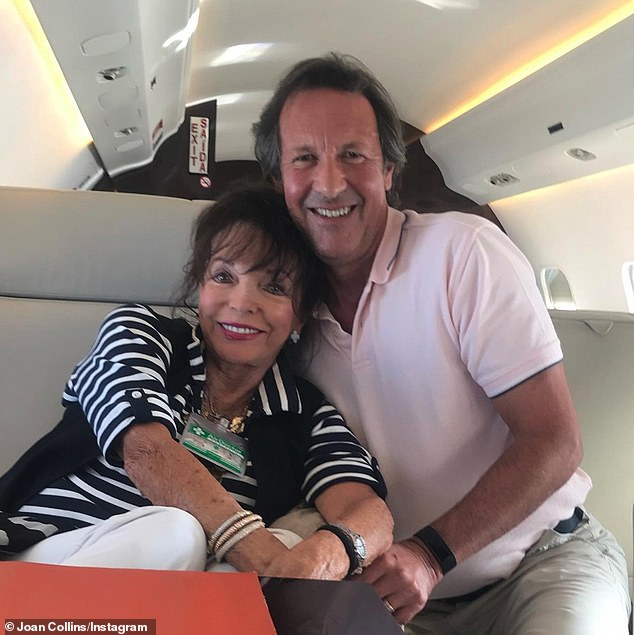 Birthday wishes: The former Dynasty actress and husband Percy celebrated his 58th birthday a few weeks ago and marked it with a loving post on Instagram