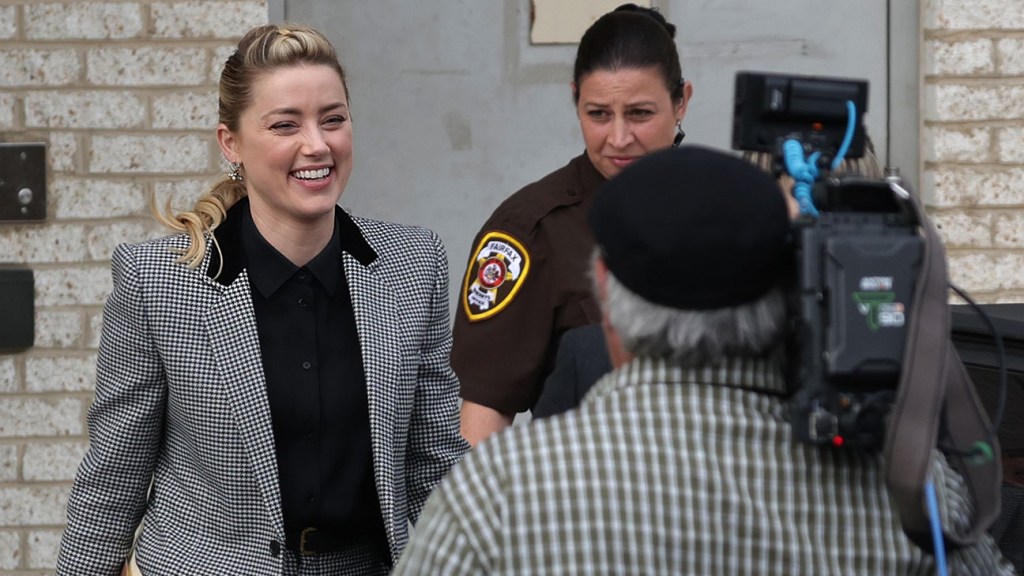 Through five weeks of trial, one mystery with a multimillion dollar question mark has lingered: How much were Johnny Depp or Amber Heard’s careers harmed by the actors allegedly defaming each other?

Hollywood insiders, typically tight-lipped on dealings in the industry, have taken the stand largely to push back on accusations that the duo’s public mudslinging played a part in their tumbling careers. Keeping in line with studios insulating themselves from appearing to take sides in the high-profile dispute put in motion at the height of the #MeToo movement, Walter Hamada, president of DC Films and the highest-ranking studio officer to appear in the trial, said on Tuesday that “there were conversations about potentially recasting” Heard in the Aquaman sequel but that they didn’t relate to her legal battle with Depp.

The testimony mirrors Disney production executive Tina Newman testing last week that she wasn’t aware of the December 2018 op-ed at the center of the defamation trial playing a role in the choice not to move forward with another installation to Pirates of the Caribbean. Depp has alleged that he was cut from the franchise shortly after the column — which didn’t name him specifically but described “domestic abuse” in a time frame consistent with his marriage to Heard — was published and that he’s still being boycotted by Hollywood.

In a $100 million counterclaim, Heard has accused Depp of coordinating a campaign aimed at smearing her by calling her abuse claims a hoax.

In a 20-minute deposition shown to jurors, Hamada detailed how Heard was almost booted from the upcoming movie Aquaman and the Lost Kingdom.

“Concerns were brought up at the wrap of production of the first movie,” Hamada said of whether the studio would be “better off recasting someone who has better natural chemistry with Jason Momoa and move forward that way.”

Heard’s contract with Warner Bros. paid her $450,000 for her debut as Mera, queen of Atlantis, at Zach Snyder’s Justice League with options by the studio for her to reprise the character in later movies, the actor has tested. She was paid $1 million for Aquaman and $2 million for the sequel. The studio hasn’t decided whether to pick up her option, for which she’d be paid $4 million, for another movie.

Asked whether allegedly defamatory statements from Adam Waldman — one of Depp’s lawyers who was thrown off the case for leaking information covered by a protective order to the press — calling Heard’s abuse allegations a lie affected Heard’s compensation or role in the Aquaman follow-up, Hamada denied the claim. He described Warner Bros.’ philosophy on “hold[ing] people to their choices.”

“As a company we go through a lot of trouble when we make deals with actors,” Hamada said. “Traditionally, prior to me joining the company, every option was renegotiated. One thing we were trying to put a rein in on was not renegotiating every deal.”

Over several days on the stand, Heard testified that studios and endorsers shied away from her once Depp started to undermine her claims that she was abused by him.

“I had to fight really hard to keep my career,” Heard testified on May 17. “After I got my temporary restraining order, I lost opportunities. I got canceled from jobs. I got dropped from a campaign I had shot. I fought to keep my job in the biggest movie opportunity I had to date — Justice Leaguewith the option [for] Aquaman.”

The actress added that Warner Bros. didn’t want to include her in the Aquaman sequel and only shot a “very pared-down version” of her part.

“I was given a script, then given new versions of the script that had taken away scenes that had action in it, that depicted my character and another character — without giving any spoilers away — two characters fighting with one another,” Heard said. “They basically took a bunch out of my role. They just removed a bunch.”

Undercutting Heard’s testimony, Hamada testified that her role in the movie was determined prior to the couple’s legal battle and that her “character’s involvement in the story was what it was in the beginning.”

The testimony from the executive appointed to shepherd the DC extended universe in 2018 after Justice League flopped tracks with what Heard’s agent, WME’s Jessica Kovacevic, said about the reason her client’s role in the Aquaman sequel wasn’t as robust as desired. She tested last week that she was told Heard’s role was reduced because of chemistry issues but that negative press affected the studio’s decision, questioning why Heard’s career didn’t take off as much as Momoa’s.

“Your career takes a turn after something like that,” Kovacevic said, referring to Warner Bros. choosing Heard to play Mera after she auditioned for the part. “She was very well-received in the movie at the time. Everyone was happy with her at the time. There were no issues. Then to have a complete downturn after that, and then have that coincidence with constant tweets and negativity put out about her. I don’t have a physical piece of paper of evidence, but it’s the only logical conclusion I draw.”

Kovacevic added that Heard was dropped from an Amazon movie because of the accusations from Depp.

Hamada was the second Hollywood insider to testify for Depp in the trial. Jack Whigham, the actor’s agent, previously tested that his client was slated to be paid $22.5 million for reprising his role as Jack Sparrow in the sixth pirates movie, but that Disney went in a different direction after Heard’s op-ed.

“After the op-ed it was impossible to get him a studio film, which was what we normally would have been focused on,” Whigham said.

Heard also enlisted numerous people with ties to the industry to back up her case. Newman was called to stand to refute claims that Heard’s abuse allegations caused Disney to drop plans for pirates 6. She pointed to emails among company executives Sean Bailey, Alan Horn and Alan Bergman discussing issues with Depp on and off set.

The testimony was overshadowed by United Talent Agency’s Tracey Jacobs, Depp’s former agent, ripping apart her former client for ruining his career due to issues with alcohol and drugs.

“His star had dimmed due to it getting harder to get him jobs given the reputation he had acquired due to his lateness and other things,” Jacobs said, adding that “people were talking” about his substance abuse.

At one point, Depp had to start wearing an earpiece to have his lines fed to him because he wouldn’t remember them, she recounted.

The trial continues on Wednesday with Kate Moss expected to testify as a rebuttal witness for Depp.