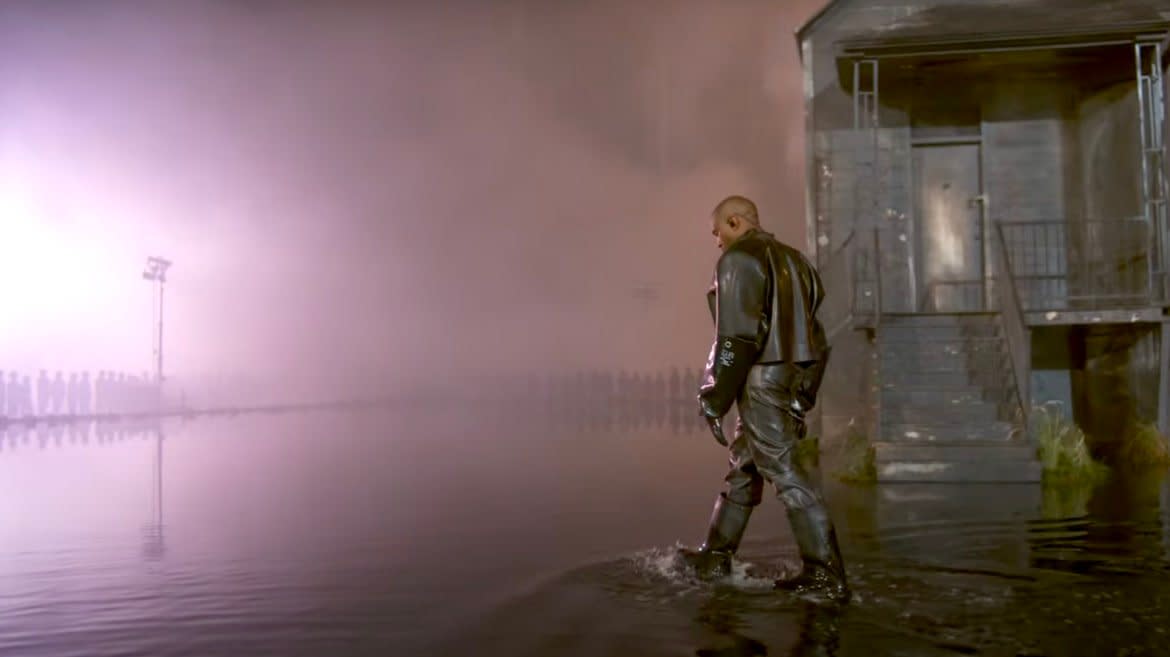 To be a Kanye West fan today means to expect some headaches and some delays. And in true fashion, the rapper kept his fans waiting over two hours for a livestreamed listening party of his new album donda 2 on Tuesday night.

And when West finally did show up, the follow-up to last summer’s donda felt more akin to an overhyped drop of discarded and disjointed tracks rather than a full-fledged studio album, replete with choppy audio and a number of glitches.

Instead, West seemed to bank on his strained relationship with his family and ongoing divorce with Kim Kardashian translating into momentum for the album’s release, which he’d only made available on his $200 handheld audio listening device, Stem Player.

Over the course of the two-hour Miami event, West roamed about the stage, which was stark aside from a burnt-out church, resembling his childhood home in Chicago, engulfed by a shallow pool of water, as he played his new tracks, which centered on his selfishness, feeling disconnected from his four young children, and his estrangement from Kardashian.

He also didn’t dare miss the opportunity to take some swipes at Kardashian’s new boyfriend, Pete Davidson. West had already made his feelings about Davidson clear earlier this month, unleashing a torrent of childish memes at the comedian on social media while egging on his followers to harass the 28-year-old (he only called off the dogs when Kardashian complained).

But it was still jarring to hear West specifically target Davidson at the sold-out event in LoanDepot Park. “God saved me from that crash, just so I can beat Pete Davidson’s ass,” he rapped alongside The Game on “Eazy.”

Another song seemed to reference a text that Davidson had sent West, trying in vain to extend an olive branch to him by stating that he had no intention of getting in the way of West’s relationship with his children. “He’s not a threat, send him a text, put him in a timeout,” West rapped on “Security.” “I’ll put your security at risk. Never stand between a man and his kids.”

West took a softer approach to Kardashian, who is also mentioned or alluded to several times on the album. The rapper has been intent on winning Kardashian back, publicly begging for a reconciliation ever since his whirlwind showmance with Uncut Gems actress Julia Fox crumbled spectacularly last week.

As the intro for “Sci-Fi,” West used Kardashian’s Saturday Night Live opening monologue, apparently trying to conjure up her happy memories of their relationship. “Honestly, all the ups, all the downs,” she says. “I mean, I married the best rapper of all time. Not only that, he’s the richest Black man in America,” with the audio cutting out just before Kardashian goes on to quip that she divorced West because of his personality.

In other parts of the delayed concert, West paid tribute to his late friend Virgil Abloh, name-dropped CNN and Monica Lewinsky, and even managed to incorporate Vice President Kamala Harris’ now infamous “we did it, Joe” audio into the intro for “Louis Bags.”

He was also joined on stage by Jack Harlow—who West recently declared was in his current Top 5 rappers—as well as Alicia Keys, Migos, Pusha T, and The Game. And for what can only be presumed as added shock value, West also brought out DaBaby and accused abuser Marilyn Manson to stand alongside him during their track from donda “Jail Pt. 2,” never mind that the song isn’t even on the current album.

The concert seemed to end suddenly, with a bizarre feature courtesy of Playboi Carti in Joker-esque clown makeup. Overall, the star-studded extravaganza didn’t seem to make up for the two and a half hours that fans in the stadium were forced to wait after being told the concert was kicking off at 8 pm—resorting to doing the wave to keep themselves amused.

It’s classic West, who last week announced that the follow-up to last summer’s donda would only be available on his pricey Stem Player—apparently before a $100 million deal with Apple in the process.

And, following in the footsteps of Dondas album listening parties, West announced he’d be putting on an event in Miami. (Rick Ross was among West’s friends who turned up to the Miami event, documenting the arrival of Elon Musk, French Montana, Diddy, and DJ Khaled at a VIP suite—who all apparently tried to kill time by chatting about crypto.)

After tickets to the listening party quickly sold out, West announced he’d be partnering with IMAX theaters, selecting 15 cities to livestream the concert. Then, on Tuesday night, West’s social media channels stated that the event would also be livestreamed on his Stem Player website. But the supposed showtime came and went, with a technical error appearing on the site, leading to West’s YouTube channel and Twitch eventually livestreaming the delayed event.

The drop of the album came after an exhausting few weeks of what can only be described as a series of cunningly-crafted PR stunts pulled by West, as he embarked on a short-lived romance with Fox before picking fights via social media with Kardashian, Billie Eilish, and Kid Cudi, and harassing Davidson. When the media storm finally seemed to quiet down, West announced the drop of donda 2 for the low, low price of $230.

Read more at The Daily Beast.

Get the Daily Beast’s biggest scoops and scandals delivered right to your inbox. Sign up now.