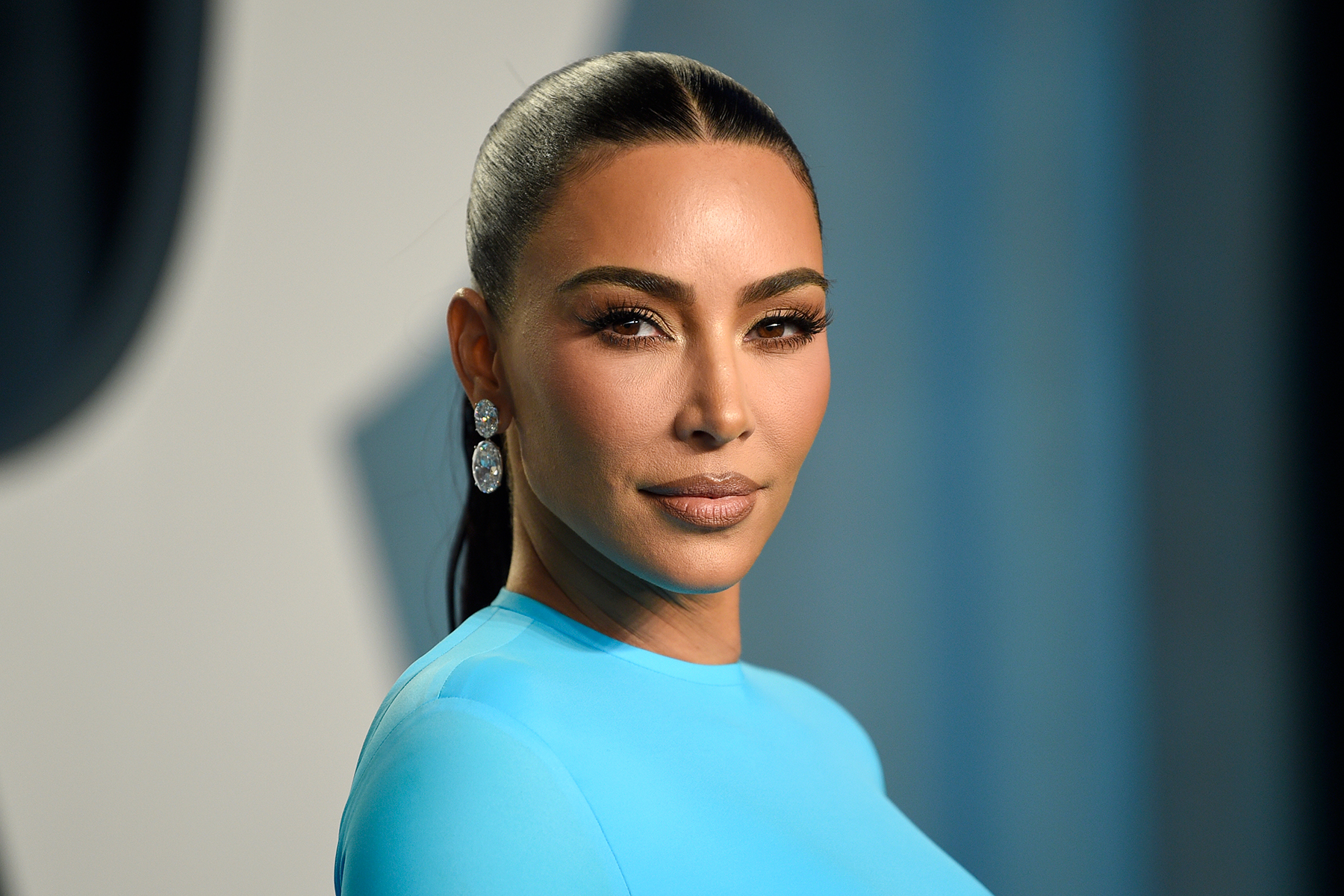 Kim Kardashian, the billionaire lodestar of the Kardashian-Jenner universe, sat in a witness box in a Los Angeles courtroom Tuesday and denied ever trying to tank Blac Chyna’s TV career.

The aspiring lawyer and former wife of Kanye West read through a series of text messages she sent to a Keeping Up With the Kardashians producer on March 16, 2017, and was adamant she wasn’t issuing an ultimatum that she’d stop filming her own show if a second season of her brother’s spin-off with his former fiancée, Blac Chyna, went forward.

Kardashian, 41, said the seemingly most incriminating text shown to jurors was riddled with errors because she had dictated it to her phone before hitting send.

“Anytime I write something long, it’s voice-dictated,” she tested. It was the sixth day of the defamation trial involving claims she conspired with her mom Kris Jenner and sisters Kylie Jenner and Khloé Kardashian to kill Season Two of Rob & Chyna using a combination of the family’s influence over the E! Network and false claims that Chyna had physically abused Rob during a blowout fight on Dec. 15, 2016, as the couple’s newborn baby, dream what in the same home.

Blac Chyna’s lawyer, Lynne Ciani, read aloud from the March 2017 text message from Kim to the producers: “OK, I don’t know what to do at this point but the level of disrespect is just unreal. Chyna told everyone that she’s on her show and she went to go get Dream’s ears pierced with Rob on camera today. We specifically all had a talk about this and said Chyna can never be on her show.”

The message continued: “I think we all need to take a break from filming for a while until you guys figure out what you’re going to do because Chyna won’t be on our show. And it actually puts my brother in a bad position. He ends up crying all day, saying the only reason she showed up was because she’s filming. So I think we just really all need a break from filming to wrap our heads around, do we want to be on a show that Chyna’s on, because you know we don’t.”

The text concluded with the line that if producers continued to film with Rob and Chyna, “then you’re going to lose the rest of the Kardashians and Jenners.”

Kim testified Tuesday that she didn’t recall sending the message, but that, assuming she did, she was the victim of her phone misquoting her.

“In this text, you’re saying that you already got Chyna off of her show, and now you didn’t want her coming on Keeping Up With the Kardashians any longer,” Ciani said.

“No, that’s not what I’m saying,” Kardashian replied. “Nothing says anything about me getting her off of here show. This is clearly voice-dictated. I think the ‘her,’ where it says, ‘Chyna told everyone that she’s on here show,’ it would be, ‘She’s on our show.'”

Kardashian said the same error occurred in the line, “Chyna can never be on her show.”

“Again, it would be’our show,’ because I would never refer to her show as here show,” Kardashian tested. “I would say Rob’s show, since it’s a spin-off of a Kardashian show. So, I’m just saying, when I read this over, what this means and what I was saying is, ‘Hey, this is our show. We have the discretion of what we are going to film content-wise on our show if it has to do with any of us on the episode. So why would you put my brother in a bad situation if he’s going to be calling us crying, saying, “She’s only showing up to film,” and she doesn’t want to hang out with him and try anything else to make the relationship work, but just show up to film? Why would we put him in that situation if this is our show? It’s not the Rob & Chyna show. We can’t control what content they film. We can control what’s on Keeping Up With the Kardashians. Why would we film with her?’ That makes complete sense to me.”

Ciani then asked if Kardashian was aware, given her role as an executive producer on Keeping Up With the Kardashiansthat after March 16, 2017, Chyna never filmed another day on that series.

Ciani subsequently confronted Kim with another text message in which she appeared to repeat the claim that she would stop filming if Chyna continued, despite a plan to simply “blur” Chyna if she appeared in any background shots.

“No we’re not gonna blur her that’s ridiculous we just don’t want her on. This is honestly so to the next level. I just, I’m going to officially take a break because I don’t want to do this anymore because this is so confusing this is just not happening I cannot believe no one listens to us, no one respects us. It’s just not happening,” the text, also from March 16, 2017, said.

“So again, you don’t recall that after these text messages, Chyna did not film anymore on the show at your insistence?” Ciani asked.

“I don’t recall any of these text messages. But I’m not denying this is me. This looks like something I would say. However, again, the show doesn’t listen to us. They have the power. And I have the right to personally take a break if I feel like I’m in a toxic work environment because this is on Keeping Up With the Kardashians. But nowhere does this insinuate that I knew she never filmed after this. I’m only speaking for myself. I’m only removing myself from a situation which I had the right to do,” Kim testified. “I can only speak for myself and how I was feeling. I’m talking about my personal break that’s needed.”

According to Chyna, 33, she was under the impression that scenes for Season Two of Rob & Chyna were still being filmed well into 2017, because Season One had been such a hit and the couple were still spending time together, trying to figure things out. Chyna claims she did not physically abuse Rob Kardashian during their fight on Dec. 15, 2016, and only “smashed” a gingerbread house, damaged a door, and broke a TV out of frustration, because Rob had stolen her phone and locked himself in a closet during a fit of jealous rage.

“Upon seeing the naked photos of herself, Ms. White panicked and started shaking and crying uncontrollably. Defense counsel, Michael Rhodes, continued to relentlessly cross-examine Ms. White despite her obvious psychological peril,” Ciani wrote, asking for a court remedy. She said Chyna became “compliant and withdrawn” after seeing the photos and deserves a chance to take the witness stand again. A hearing on the request is set for Wednesday.

Before Kim testified Tuesday morning, her sister Khloé spent less than an hour on the witness stand, defending herself in light of the lawsuit’s claims and a particular email she sent to a group including E! executive Jeff Olde on Dec. 20, 2016.

“The sisters are clearly concerned and uncomfortable for our brothers safety and the credibility of the brand at this point due to how they are both tarnishing it,” Khloé wrote in the email shown to jurors. She confirmed she was referring to her only brother and Chyna after the couple’s Dec. 15, 2016 fight, which caused Chyna to move out of the house owned by Kylie Jenner which Chyna and Rob had been sharing after the birth of their daughter.

Khloé’s email continued, “We don’t feel comfortable encouraging such volatile behavior and if we can put our foot down in any way we believe it’s our job to do so. We are even considering not moving forward with our show if theirs continues. That’s how strongly we feel this is damaging to our family.”

Grilled about the last two lines, Khloé was much more combative than her sisters on the witness stand. She repeatedly shot back that there was “never” a Season Two of Rob & Chyna, and she was adamant that her family had no control over the E! network, only the Kardashian brand.

“What I do know is that there was such volatile behavior from both of them, and we wanted to protect our brand and voice our concerns as to how outrageous and violent and chaotic it was. And we could not sleep at night without saying something. Because if, God forbid, something more happened, I mean, that would be absolutely terrible to live with that on our souls,” she tested.