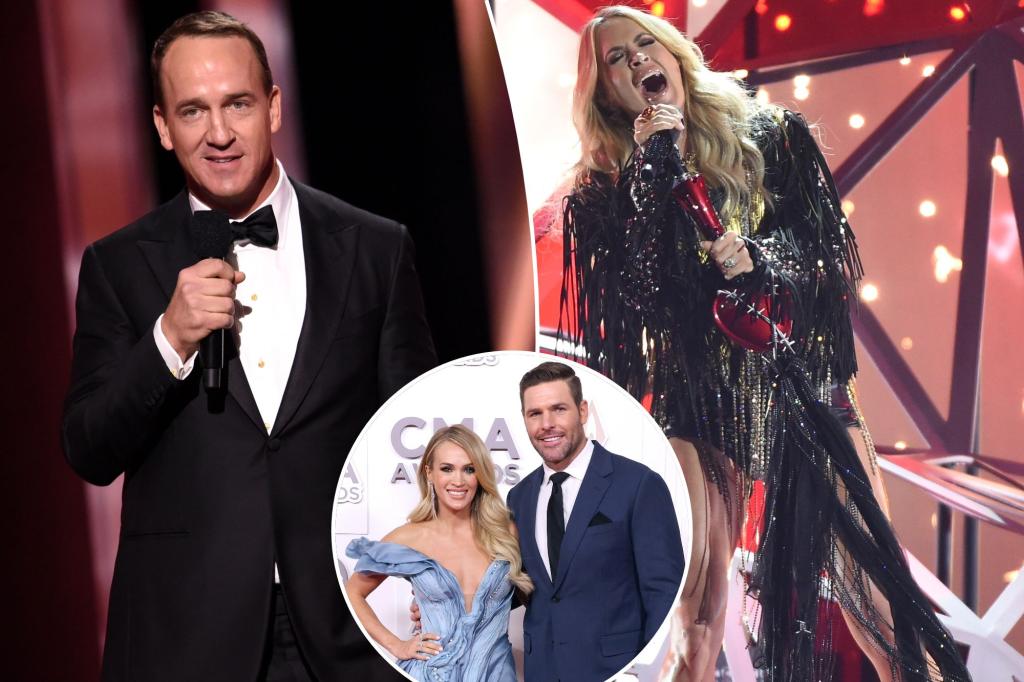 Peyton Manning and Luke Bryan wouldn’t let Carrie Underwood forget about the infamous side eye she gave the “American Idol” judge at the CMA Awards.

During their opening monologue, Manning and Bryan, who hosted the CMAs on Wednesday, referenced the moment from last year’s show, when he joked about Aaron Rodgers’ coronavirus vaccine controversy. At the time, Underwood’s husband, former NHL star Mike Fisher, defended Rodgers on social media, and when the camera panned to the singer, she delivered a stoic side eye.

“Carrie Underwood and I have a lot in common,” Manning said to Bryan during Wednesday’s opening monologue. “We both work with Brad Paisley, we’ve both been on ‘Sunday Night Football’ a lot and we’re both very nervous about what Luke Bryan might say tonight.”

The joke drew laughs from the star-studded crowd, and Bryan replied, “Hell, even I’m nervous about what Luke Bryan might say tonight.”

Not much was off limits for the NFL legend and country music star in their opening monologue.

“Whatever makes you country, you are welcome here tonight,” Bryan said during the 2021 CMAs. “Rest assured, we’re following all the health protocols to keep everyone safe, and it’s so great to be here with all my fellow artists — tested and together. Or immunized? Who is it? Just playing.”

The camera then showed Underwood, who didn’t appear amused by the joke, and just gave a stern look.

Bryan’s joke was about Rodgers and his controversial stance on vaccines, which dominated headlines last November when the Packers quarterback tested positive for COVID-19. He then entered the NFL protocol for unvaccinated players.

Rodgers intentionally misled reporters in August when he told them he was “immunized” against coronavirus. Rodgers, at the time, said he had been following an “immunization protocol” instead of getting vaccinated.

At the time, Fisher made headlines when he took to social media to support Rodgers.

“I stand with @aaronrodgers12 I believe in the freedom to choose what we put in our bodies and the freedom of conscience,” the hockey player wrote in a lengthy Instagram statement. “I agree with him in that the science clearly shows the vaccinated spread covid at basically the same rate as the unvaccinated.

“The @nhl @nfl and other leagues are ignoring the science and choosing to coerce and punish unvaccinated players with these restrictions. If they really cared about people’s health they would have daily testing for all.”