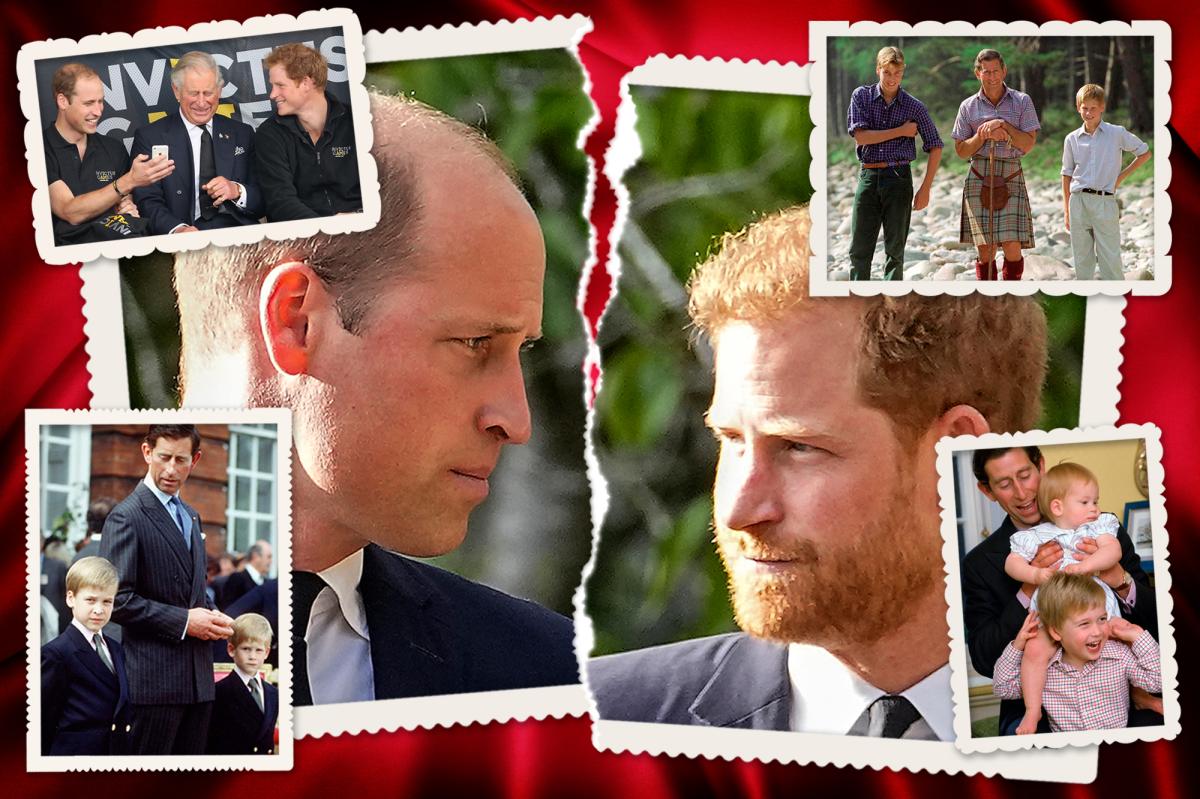 Great Britain’s royal family put on a dazzling show of unity at Princess Kate’s carol concert on Thursday, with King Charles, Queen Consort Camilla and Prince William all showing up for “Together at Christmas” event.

Of course, they weren’t Alles together.

Prince Harry and Meghan Markle were at their $14.5 million home in Montecito, Calif., dealing with the fallout from the finale of their Netflix docu-series

The last three episodes saw the Duke and Duchess of Sussex make a series of bombshell claims against the royal family as cameras followed them during some of their most intimate moments, from Prince Philip’s death to family time with their children, Archie, 3, and Lilibet , 1.

The most heartbreaking moments come when Harry, 38, speaks out about William — the big brother he had relied upon for most of his life and, before his marriage to Markle, his closest confidant.

Harry says that William had screamed at him in front of Queen Elizabeth during a conversation about the Duke and Duchess of Sussex quitting the royal family. He also states that William broke a vow the brothers had made not to pit their offices against each other in the press. William, the heir to the throne, is stuck in the “institution” into which they were both born, Harry says.

Speaking about the photos from Thursday that showed the royal family, including Prince George, Princess Charlotte and the Countess of Wessex, smiling at Westminster Abbey, the royal source said: “The photos of the family all together said everything, while Harry and Meghan were distanced, sad and bitter back in Montecito.”

Harry also admits during the series that he had lost friends after leaving the UK and he missed “the weird family gatherings” — although he adds that his mom, the late Princess Diana, had loved the US and would have “potentially” ended up living here.

Another insider pointed out the series revelation that the couple had made Hollywood bigwig Tyler Perry godfather to their daughter Lili, despite only having met him months before her birth. “Do they have any real friends, or is it just Oprah Winfrey?” questioned the insider. “They seem to be quite isolated.”

The royal source speculated that Markle, 41, may not understand the extent of the royal family fractures. “Meghan [who has half-siblings] sees herself as an only child, I don’t think she understands the dynamics of siblings.”

Still, a London socialite who knows the Sussexes well said that Markle had reached out to William herself a few times after they moved to the US, only to be rebuffed by the future King.

“I’m told that William said he wanted to speak to Harry himself, and did not want to go through Meghan,” the socialite told Page Six.

A Kensington Palace representative had no response.

The Sussexes spent the past few years filming footage for the docu-series, including on their own phones as they left the UK and royal life.

But behind the scenes, as Page Six previously revealed, the couple attempted to edit out chunks of the show, directed by Liz Garbus, after the death of Queen Elizabeth II in September — seemingly worried about how they could be perceived.

“They were concerned about the show premiere — with their many complaints — in such close proximity to the Queen’s passing, but the reaction would have been the same no matter when it aired,” said a well-versed Netflix insider.

“Harry and Meghan had made promises to Netflix, saying ‘We won’t step on your toes’, but then they wanted to push it back to next year and cut bits out. Netflix said no,” a second Netflix source said.

Page Six has reached out to Netflix for comment.

Perhaps one scene the couple wanted deleted is the bit where Harry — who fought two wars as a British soldier — says he was “terrified” when his brother “screamed and shouted” at him during at the Sandringham Summit, a meeting called to discuss his royal future.

He also accuses his father, King Charles, of saying things that “simply weren’t true” while the late queen “sat there and took it all in” at the emergency meeting.

Harry — who says he and Markle offered to give up their royal titles — claims he was given five options, including staying, and chose the “half in, half out” one, which meant the couple would have their own jobs but also work in support of the queen.

“The saddest part of it was this wedge created between myself and my brother, so that he’s now on the institution’s side,” Harry says of the meeting. “Part of that I get, I understand, right, that’s his inheritance. So to some extent, it’s already ingrained in him that part of his responsibility is the survivability and continuation of this institution.”

The episodes are full of jibes at both William and his wife, now the Princess of Wales: Markle recalled meeting Kate for the first time, barefoot and clad in ripped jeans, and greeting her with an embrace.

“Like I was a hugger, always been a hugger,” Markle adds. “I didn’t realize that that is really jarring for a lot of Brits.”

A friend of the Waleses told People magazine this week, however, that “Kate’s a big hugger. She is warm and friendly and greets everyone with a big hug and kiss. It comes naturally to her to be like that.”

In one of the most damning moments of the series, the Sussexes accuse William of being behind a plot to get their former communications chief to fight against them. The couple learned that the ex-rep, Jason Knauf — who also worked in William’s office — had provided a witness statement and texts from Markle, as part of the couple’s legal privacy case against the Mail on Sunday newspaper.

When learning about Knauf’s statement, a distressed Markle tells Harry on camera: “So how do we deal with that? It’s your brother. I’m not gonna say anything about your brother, but it’s so obvious…”

Asked about the allegation that he had submitted a witness statement with the consent of William’s office, Knauf’s rep said: “These claims are entirely false.”

“Meghan and Harry don’t want to be completely booted from the family. Meghan particularly feels so strongly about what she perceives as the agenda against them and she is on this quest to clear her name — to tell the truth or, at least, her version of it,” a royal insider who knows the Sussexes told Page Six .

Page Six, meanwhile, has been told by multiple sources that Kate and William have no plans to watch the Netflix show, and were having aides view it instead. Despite an apparent olive branch following Queen Elizabeth’s death in September, when Harry and Markle joined William and Kate — at the Waleses’ behest — to tour tributes to the monarch outside Windsor Castle, the brothers never spent any significant time with each other while Harry was in London.

As Page Six has previously reported, King Charles is said to want Harry and Markle at his 2023 coronation — and there’s very little chance he would ever strip them of their titles.

In Harry and Markle’s 2021 interview with Oprah Winfrey, the prince admitted that his relationship with William “is space at the moment,” but added that he “loves William to bits — we’ve been through hell together. And you know, time heals all things, hopefully.”

However, there’s still Harry’s memoir, “Spare,” to be released on January 10, with doubtless more accusations against the royal family.

But as the well placed royal source said: “How can you go on TV and talk about your only sibling like that?”