R Madhavan’s Rocketry: The Nambi Effect is releasing across the country India in different languages, including Hindi, Tamil, English, Telugu, and Kannada. The film is based on the life of the former rocket scientist at Indian Space Research Organization (ISRO) Nambi Narayanan. Along with this, the cinemagoers also have actioner Om The Battle Within releasing in the theaters this week. Both the films, belonging to different genres, will cater to a different set of audience. Film trade experts suggest while Rocketry will grow at the box office based on its word-of-mouth, Om will see a larger footfall in Tier 2 and Tier 3 cities.

Film producer and trade analyst, Girish Johar believes the Madhavan film is “bending towards a niche audience” and is not a “hardcore commercial film”. As per him, the film is a bit upmarket and is targetting audiences in multiplexes.

“The buzz is quite good and positive, specifically down south. Rocketry is going to get a good start at the box office. The film has been receiving a lot of accolades from the international arena as well, so that is looking positive. For the Hindi belt, it will be more reliant on word of mouth and it should be decent to start with,” Johar told indianexpress.com, while adding that Rocketry should do somewhere around a crore on its opening day. “I am looking at its weekend and lifetime box office collection, instead of day one collection, since I know the film is based more on word of mouth,” he added.

R Madhavan plays the lead role in Rocketry. He also wrote and directed the movie. Nambi Narayanan, Head of ISRO’s cryogenics division, was falsely accused of espionage and arrested in 1994. All charges against him were dismissed by the Supreme Court in 1998.

While Girish Johar feels Rocketry will find an audience in the urban market only, film exhibitor Akshaye Rathi, who has watched the film, suggests, “It is not a film which is intellectually inaccessible to people. It is a film about a rocket scientist and not a lesson in rocket science. It is told in a manner that common of the commonest people can understand.”

As per Rathi, the film will find traction across the country but its box office collection entirely depends on “how quickly the word of mouth spreads.” He said, “No doubt about the fact that this is not a film which will open to massive numbers on day one, it is more of a word-of-mouth film.” He also compared Rocketry to The Kashmir Files, which came as a surprise not only for the trade pundits but also for the film’s producers who never expected it to do so well at the ticket counters. “Even The Kashmir Files was also not an entertainer, but it was on an issue extremely relevant to us. That is what made it work. Having watched Rocketry, I can say it is one of the most important films made out of the Indian film industry. As a director and actor, R Madhavan has been phenomenal in this film,” shared Rathi.

For those who are looking for hardcore Bollywood entertainment, they have Aditya Roy Kapur-led Om. The action drama also stars Sanjana Sanghi, Jackie Shroff, Ashutosh Rana and Prachi Shah. 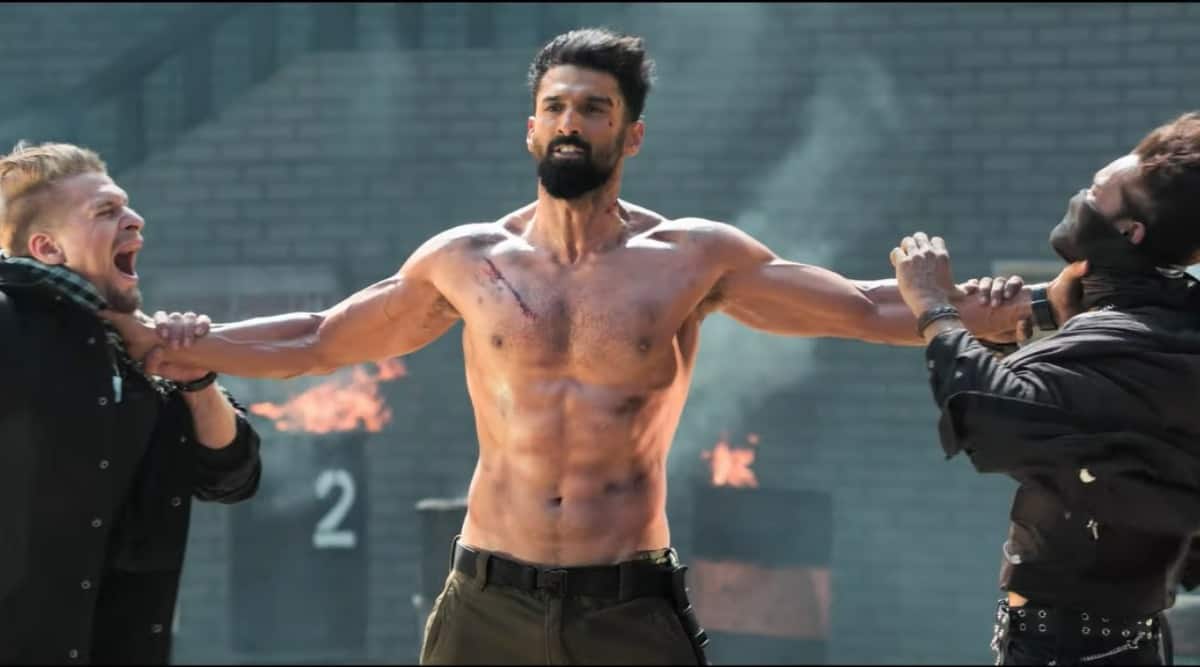 Aditya Roy Kapur in Om The Battle Within.