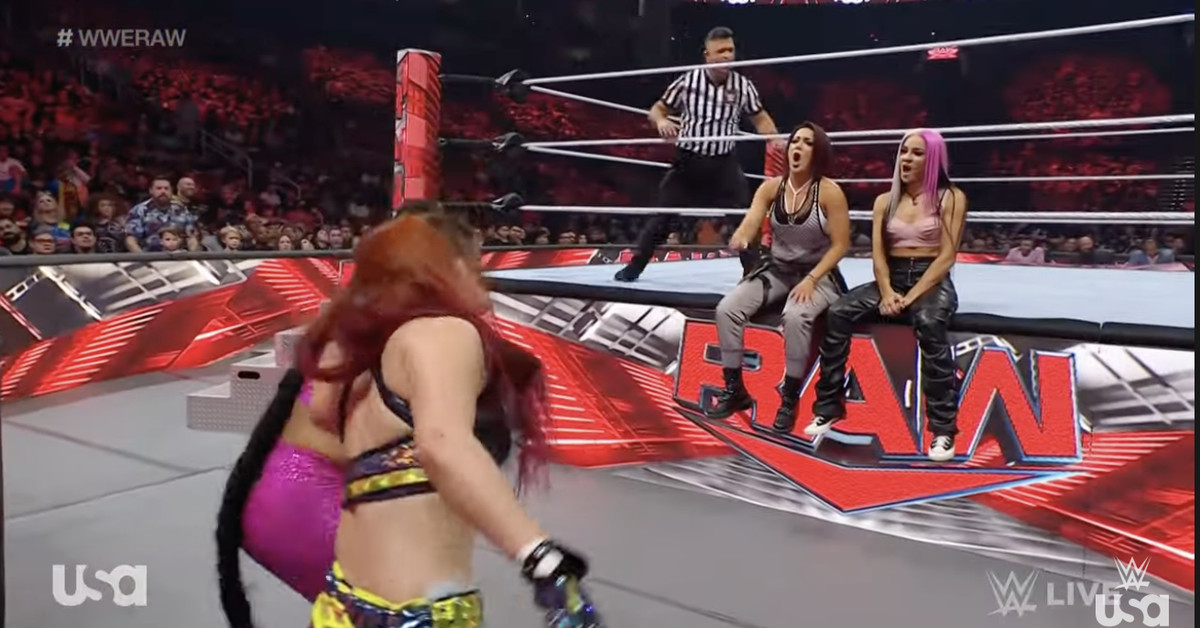 Hey! It’s the first Raw since SummerSlam! Will Edge answer questions? Is Becky Lynch a face now? And what’s up with Bayley, Dakota Kai, and IYO SKY joining forces like the Legion of Doom? Claire is watching too and no doubt she has the same questions. But since she blogs, she can’t actually say all that.

IYO SKY vs Bianca Belair. How did we get here? WWE threaded the story into Raw‘s first two hours building up to a match. First, Becky Lynch hit the ring when Raw started with a good babyface promo. Becky adequately explained her evolution from The Man to Big Time Becks back to The Man. And she thanks Bianca Belair for part of that change. Bianca hit the ring, the two hugged, and Becky told the champ to hold it down until she comes back from nursing a separated shoulder. While Bianca basked in her glory and noted the respect she has for Becky doesn’t extend to Bayley, IYO SKY, or Dakota Kai, those same three women assaulted Becky in the backstage area. Bianca rushed to Becky’s defense—in heels no less!—but was too late.

Several matches and minutes later, Asuka squared off with Alexa Bliss. Bliss talked about climbing the ladder after discarding Doudrop, and Asuka was her first rung. The match was okay but got a chance to be anything but that since Bayley, Dakota, and IYO interrupted the proceedings. Guess who came to the ring in a very fresh pair or Air Jordan 11s and ready to fight?

Bianca chased away the newly minted trio and challenged either of them to a match. IYO accepted.

IYO and Bianca was all about both women feeling each other out. IYO didn’t show her mastery of the skies while Bianca didn’t show off her power as often as one might think. The most vicious moment was Bianca catching IYO’s Frankensteiner attempt and slamming her head against a barricade.

It was at that exact moment the match’s true purpose revealed itself. Bayley and Dakota, already at ringside, blocked Bianca from throwing IYO back into the ring. Asuka and Alexa evened the odds as all six women stood toe-to-toe. Bianca and IYO wrestled a bit more but the distractions were aplenty.

Eventually, everything deteriorated into the four women outside the ring fighting each other inside the ring, forcing the ref to ring the bell and rule the match a no contest.

While some may balk at the fact both women’s matches this week being some form of DQ, but the finishes served a greater purpose. Bayley’s crew wants control over Raw‘s women’s division. Making their presence known in every match on the card makes sense. Beating down every woman just to make a point is key to that. And, to make it worse, they effectively put Becky out of commission after making her shoulder issue “worse.”

I’m feeling all of this and can’t wait to see where it goes. Bianca isn’t exactly a team player. Neither is Asuka or Alexa for that matter. Seeing the three of them go against a legitimate stable has a lot of potential. Can they get along? Will they get along? Which one of Bayley’s group wants Bianca’s championship? How violent will this get? Hopefully we get answers to these questions and more.

While the Ciampa vs Chad vs Dolph didn’t work for me as much as the earlier one featuring AJ, it was a solid affair. The best moment was Chad and Dolph showcasing their mat wrestling acumen for a brief moment. So? Weird Dolph came back for Theory and as of now, is doing nothing with Theory.

Anyway, Ciampa and AJ faced off with Miz in Ciampa’s corner. And this was, of course, a very good match. It’s not so much clashing styles—no pun—with these two so much as it’s two vets who just know each other really well due to scouting from afar. Rey dodged the Pele Kick. AJ reversed the Air Raid into a Styles Clash! Ciampa saw the phenomenal forearm coming and countered with a patented knee strike. If not for Miz, these two might still be wrestling right now.

But Miz is a thing and he helped Ciampa several times. The biggest of those times came when the action hit the outside. Ciampa threw AJ over the barricade into the timekeepers section. And guess who held AJ’s leg while the ref counted him out? If you said “Maryse” then clearly your brain is not in the right place. Well, it is, but this is the wrong time.

It was Miz. It was Miz who held his leg and it was Miz who almost got AJ disqualified. Ultimately, Miz’s presence gave Ciampa the high ground, allowing him to attack AJ as soon as Styles got back into the ring, and finish the match with an Ending of the Fairytale variety.

Now we’re getting Ciampa vs. Bobby Lashley for the US title. Words I thought impossible to write after the last few months. But this was a solid story told through good wrestling in three matches with different flavors. That’s a win for everyone.

I believe it’s time for Lashley to move on from the US title, so give me Ciampa as the champ. Please?

AJ Styles showed me something new this week. At the end of this very good opening triple threat match, Ali hit Miz with a 450 splash only to bounce right into AJ’s hands and fall victim to the Styles Clash. Oh, and AJ executed said Styles Clash right on top of Miz. It was a perfect ending to a great match.

Miz was hobbled during most of the match due to some smashed ribs from his SummerSlam match. He did the DDP tape job, so props to him for that because it’s always appreciated. Logically, that meant AJ and Ali played a game of anything you can do I can do better. And both men, at different times, did their best to take each other out and focus on the injured Miz.

The best example was Ali launching himself off the top rope and hitting AJ with a tornado DDT onto the floor. Ali is so dope and reasons like that are small samples why. While AJ getting the victory was never in doubt, this really was a showcase for Ali. And he, as per usual, answered the bell. Great opening match for Raw with plenty of stakes.

Who Wants the Smoke Now, Biotch?

Seth Rollins, who apparently doesn’t care that his wife got assaulted earlier in the night, came out worried about Riddle. The Street Profits, still kinda licking their wounds after losing to The Usos, came out in defense of their friend. Seth talked his ish, clowned them for losing, told them to break up, and said if it was just one of them, then maybe he’d fight. Well, the Profits took him up on that offer and decided to play a game of Paper, Rock, Scissors for the right to fight “Franklin” Rollins. Well, in a move surely hinting at a break between friends, Montez basically said “nah” to that, grabbed the ref, and ran down to the ring.

What followed was a great match all about proving Tez can go dolo with one of WWE’s best. His hurt ribs were the other part of the story, meaning his normal high impact offense did just as much pain to him as Seth. And it came back to bite him in the end.

Tez dodged Seth’s frog splash and went for his own. But he caught two knees to those hurt ribs. Rollins hit a Blackout, or Curb Stomp, whatever they’re calling it, and got the W.

He went for another post match but Angelo Dawkins came to his partner’s side. Mission accomplished on all fronts, Tez. Unfortunately, that probably means we’re one step closer to the Profits breaking up and walking on opposite sides of the block.

Judge Not, Less Ye Be Judged

Edge came back. Edge cut a good babyface promo. Edge even apologized to the crowd for being, in his words, an “asshole.” Edge kept it simple: He’s here to end the Judgment Day.

The only knock I have is the fact he didn’t use the music and presentation from SummerSlam. But I’ll live.

Oh, It Ain’t Over

Edge wasn’t done. This week’s main event saw The Usos defend their titles against The Mysterios. Which…felt funny to me. Sure, they won’t SummerSlam match, but they lost their tag match prior to that one. The only reason they had this spot was for something at the end of the show or for a title change. As the match went one, and it was a solid affair, it became obvious a title change wasn’t in the cards. The Usos continued their reign—which is becoming boring—and the Judgment Day hit the ring for some good old fashioned revenge. Cue Edge’s music. The Rated R one interrupted the beat down and Rhea squeezing the life out of a Mysterio with her thighs like Xenia Onatopp. For…reasons…I want more of that.

Anyway, Edge cleared house and set up Damian Priest for a spear. Only for Rhea to push Dom in front of him. Edge showed no remorse for the accidental spear, and chased the his former crew through the aisles.

Rey, who earlier noted his friendship and history with Edge, didn’t see Rhea push Dom but did see Edge spear him. He looked confused and no doubt upset his longtime friend would do something so heinous.

I’m not sure this story needs this layer of drama since it already writes itself. But, here we are.

Raw what an entertaining show this week. All of the matches had some sort of stakes, their newest group got some development, and the United States championship looks like a big time belt rather than just a prop. And we got solid, good, or great wrestling all night, combined with good promos. Not every match was perfect and I question if they’re overbooking the beef between Judgment Day and Edge.

That’s my grade and I’m sticking to it. Your turn.