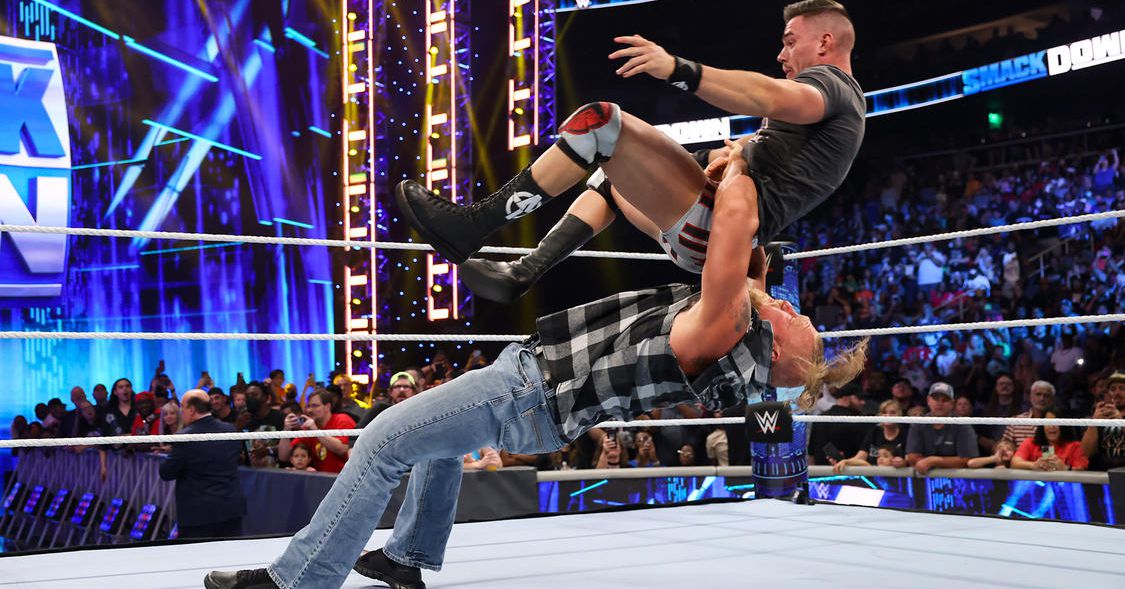 Roman Reigns and Brock Lesnar have a long history, the kind of history you can draw on to tell a simple story heading into yet another big match between the two. That’s more or less what we got in the main event spot of Friday Night SmackDown this week in Atlanta.

Paul Heyman was charged with saying a few words, but he didn’t need to say much. This is the kind of match that sells itself.

Instead, they went with everything surrounding it, just enough to add some intrigue to it. Theory attacked Lesnar from behind before he could get his hands on Heyman, and Brock absolutely annihilated the poor guy because Vince apparently forgot to teach him that you don’t attack Lesnar in the back, you attack him in the crotch.

Straight for the biggest weakness, kid.

While Theory was trying to rush off, Drew McIntyre hit the scene to lay him out with a Claymore before staring down Lesnar. That may very well be what the future holds. Probably not, but maybe!

It was a little strange to have this show without Roman Reigns, but that’s a reality we should just get used to at this point. The part time status of the top guys is going to be a major talking point of McIntyre moving forward, so we’ll just have to deal with it.

There were reports a while back that Vince McMahon wanted Ronda Rousey to smile more. If you thought that more or less went against everything that always made Rousey interesting, you were one of many.

They may actually be correcting course now that McMahon is out.

That’s sure what it felt like on this show, where Rousey was back to being her very pissed off self, looking to kick some ass and take some names. She is the “Baddest Woman on the Planet” after all. The chief goal always should have been to make the badass look really badass at all times, while finding new and interesting ways to make that clear.

Here, they achieved that by having Shotzi attempt to brag about scoring a win over Aliyah and Rousey hit the scene to tell her to get the hell out of dodge. When Shotzi came back with “oh, hey Ronda” and tried to throw a punch, Ronda easily put her on her ass and smoothly responded “Bye, Shotzi.”

She took the microphone and stumbled over her words a bit while getting across how pissed she was, which is obviously a step back, but she made up for it by telling some random guy in the crowd “you shut up, and your mom failed you .”

You don’t need to be a Rousey fan to support this, simply because it’s not so much that it’s Rousey but rather it’s a sign that there are now creative minds who understand how to actually use someone like Rousey. This is good!

It all led to Rousey teaming with her opponent at SummerSlam, Liv Morgan, in a match against Natalya & Sonya Deville. They told a good story with the match, too, with Morgan repeatedly refusing to tag Rousey in because she wanted so badly to show that she could win on her own and she didn’t need Ronda.

Finally, Morgan got close enough that Rousey could simply tag herself in, at which point she ran wild on Deville, tapping her with the Ankle Lock while Morgan took care of Natalya. What was notable was that Morgan only won after Ronda got in.

This was a great way to build to their title match at SummerSlam.

This was a pretty good show overall!