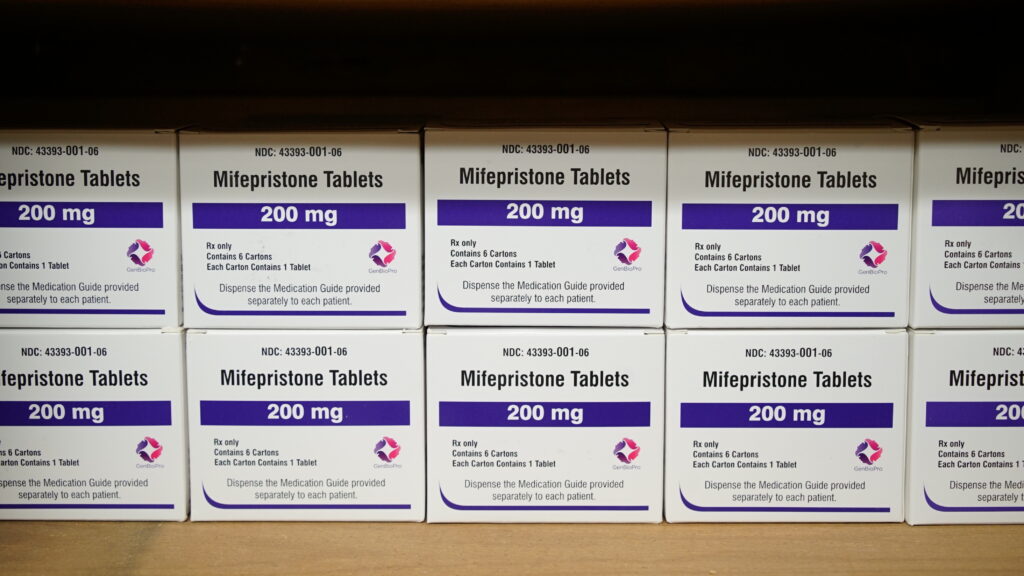 The Food and Drug Administration earlier this month removed a longtime restriction that only doctors could dispense mifepristone, which is approved for abortions up to 10 weeks. The move opens the door for pharmacists to supply the drugs and shores up protections for mail orders, which have become an important channel for abortion access in the wake of Roe’s overturn last summer.

But it also puts abortion pills in a legal gray area in 12 of the country’s most abortion-restrictive states, where the procedure is banned from conception to six weeks. In two other states, Montana and Wisconsin, there are no clinics currently providing abortion, according to pro-abortion rights group the Guttmacher Institute. Eighteen states require a doctor to be present when someone takes the pill, effectively banning mail-order mifepristone, though the Biden administration pushed against those limits with a recent Justice Department opinion.

In those especially restrictive states, it’s not entirely clear whether state laws can effectively prevent people from accessing a drug that the FDA has approved. State governments have sometimes added additional warning labels to drugs or limited dosage amounts — primarily for pain medicines like opioids — but fully capping access is unprecedented territory.

While it’s generally been assumed that FDA’s authority wins out — as it did in a 2014 district court case over Massachusetts’ attempt to ban an opioid — it will take a lawsuit to put the mifepristone argument to the test.

“Right now, states are assuming that they have the power to do whatever they want on abortion,” said University of Pittsburgh bioethicist Greer Donley, who studies abortion law. “It’s not actually going to make any difference at all on how states act unless a court actually issues a ruling.”

Pharmacists and doctors, operating under state licenses, are unlikely to take that step, say abortion advocates. That leaves reproductive rights groups, mifepristone makers (one of which, GenBioPro, has filed a lawsuit before) — and, possibly, the federal government.

Asked about the possibility of a lawsuit, White House spokesperson Kevin Munoz said litigation decisions are made by the Justice Department, “however broadly speaking, mifepristone is a drug that has been approved and used safely and effectively for two decades in the US, and is used in over 60 countries.”

In the meantime, “it’s going to be a hot mess,” Kirsten Moore, director of the pro-abortion advocacy group Expanding Medication Abortion Access, told STAT. “We’re gonna have to fight really hard to preserve [the] FDA and their authority to approve drugs and ensure that people have access to FDA-approved drugs.”

Moore joined Biden health secretary Xavier Becerra in a briefing Wednesday on abortion drug access more broadly that touched on the legal issues around the new decision on making mifepristone available at pharmacies.

“Our mothers and grandmothers are once again fighting to roll that rock of equality up the hill, and now it’s up to our daughters to help roll that rock with them. The good news is that they’re not alone,” the secretary said. “The president and the vice president have taken an all-hands-on-deck approach to protecting and expanding access to reproductive care that includes abortion care for everyone.”

Becerra left the call before reporters could ask questions. The FDA did not respond to questions about legal jurisdiction before this article was published.

Major pharmacy chains including Walgreens and CVS have signaled they plan to register pharmacies to dispense the drug but have not provided details on how they will navigate the clash between federal policy and state laws.

Walgreens is evaluating which pharmacies to register “and will dispense [mifepristone] consistent with federal and state laws,” a spokesperson said in an email.

Because of the haze over whether states can restrict access to a federally approved drug, some physicians and reproductive rights groups argue the FDA’s update is not enough to secure care for the millions of people who live in states that have instituted sweeping abortion bans.

“While it’s amazing that this stuff has happened through the FDA, the reality does remain that in many parts of the country, state laws [are] still going to be directly in the way of patients accessing safe and accessible abortion care,” said Smita Carroll, an obstetrician-gynecologist in New Mexico and fellow with Physicians for Reproductive Health. “It’s a great step, but it’s not enough.”

Many of the administration’s actions to shield reproductive rights have come from the FDA, which in 2021 removed a requirement that patients go to their doctors’ offices to get their mifepristone prescription. The agency also in late December changed the label on emergency contraception known as Plan B, clarifying that they are not abortion drugs amid some anti-abortion advocates’ calls to limit access to the over-the-counter pills.

But doctors who perform abortions or prescribe mifepristone worry the patchwork of national access will only persist. Pharmacist groups such as the National Community Pharmacists Association have advised their members to follow state law.

“It really is going to be a state-by-state issue that our members need to be aware of, as in the license rules for the state that they’re located in,” said Ronna Hauser, NCPA’s senior vice president of policy and pharmacy affairs.

While no litigation has been filed yet over the FDA’s update, 20 Republican attorneys general railed against the decision in a letter to the agency last week.

“The Food and Drug Administration’s decision to abandon commonsense restrictions on remotely prescribing and administering abortion-inducing drugs is both illegal and dangerous,” they wrote, led by Alabama Attorney General Steve Marshall.

The broader question of state versus FDA authority would likely go to the US Supreme Court, said Marc Scheineson, a partner at law firm Alston & Bird and former associate FDA commissioner. “Traditionally, FDA approval would preempt state obstacles,” he said, noting that while legal battles could help clarify the issue, federal authority should stand. “The only way to challenge this would be not based on the agency’s jurisdiction but based on whether the agency is being arbitrary and capricious.”

Essentially: Argue that the FDA ignored or didn’t have enough data about potential risks.

An anti-abortion coalition named the Alliance for Defending Freedom is already making that case in a lawsuit filed last November that argues the pills should be taken off the market entirely. The case is before conservative Texas judge Matthew J. Kacsmaryk, who could rule in favor of ADF, effectively pulling mifepristone from the market until there is an appeal.

“States have the right to restrict chemical abortion drugs in a manner that is more protective than the FDA’s approved regimen, especially given the state’s strong interest in protecting its citizens from the harmful effects of dangerous drugs,” said Alliance spokesperson Hayden Sledge, asked about the FDA’s recent update.

In nearly two decades, 20 people died after using mifepristone, many from sepsis — in extremely rare cases when the pregnancy isn’t fully cleared from the uterus after taking the drug — and others from unrelated homicide and drug overdose, according to an analysis of FDA adverse reports data. There were more than 2,000 reports of serious side effects, many of them related to ectopic pregnancies that needed surgery. Authors of the report, which include Kathi Aultman of the anti-abortion Lozier Institute, recommended an ultrasound to rule out ectopic pregnancies before dispensing the drug. The rates of serious side effects or death with mifepristone are comparatively much lower than other FDA-approved drugs. For instance, the agency received 522 reports of death linked to Viagra in the 13 months after its approval.

In the face of certain legal challenges, the White House is relying on mail-order protections to keep mifepristone channels open. On the same day the FDA announced the pharmacy update, the Justice Department issued an opinion that removed mifepristone from a 19th-century law restricting abortion services through the mail, arguing that it is federally approved for medical purposes.

“There are lawful uses for mifepristone literally in all 50 states,” White House Gender Policy Council Director Jen Klein told STAT at the time. “If you live in a state that even has a six-week ban in place, using mifepristone at five weeks, five days is a legal use.”

Even in states where pharmacists are in the clear to supply the pills, doing so could bring on risks that many aren’t willing to take. Doctors and clinics that perform abortions regularly deal with protestors who could similarly threaten pharmacies that stock mifepristone or customers’ prescription fillings. Mail-order pharmacies have protections to keep patient information confidential, but brick-and-mortar shops including major chains like Walgreens may need to set up similar safeguards.

For people from abortion-restrictive states who travel to other states to see doctors, get prescriptions and care, their insurer may also refuse out-of-state coverage, said Jessica Lee, an OB-GYN at the University of Maryland and a professor at their medical school.

“These are difficult decisions for them to, one, have to make but then to have to travel and spend hundreds [or] , [of] dollars of their money to try to resolve,” said Lee, who, like Carroll in New Mexico, has seen a surge of patients from abortion-limiting states since last summer. “I’m almost more worried about who I’m not seeing because overwhelmingly, all these patients who get to us from out of state are wealthy and not people of color.”