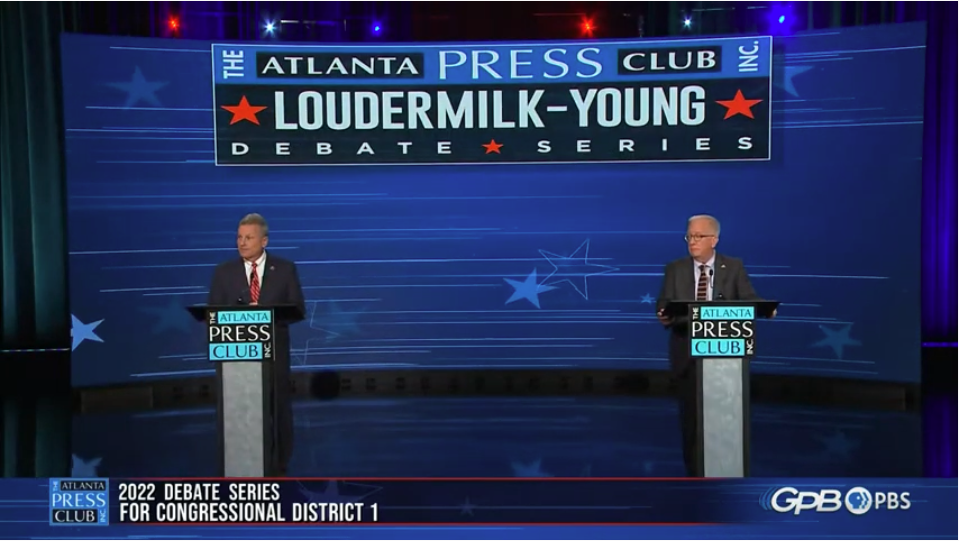 Candidates for Coastal Georgia’s congressional seat faced off in their first debate, which had the candidates answering tough questions on healthcare costs, inflation, and personal wealth.

Carter, 65, has represented Georgia’s first Congressional district since 2015. He previously served as mayor of Pooler and is a pharmacist.

He shared the stage with Herring, a 63-year-old Savannah attorney, who has represented corporations and is a partner at one of the city’s white-shoe law firms, Hunter, Maclean, Exley & Dunn, PC

Carter sought to paint his Democratic opponent as a would-be “rubber stamp” for President Biden should he become a congressman. Carter repeated the phrase six times. Carter tied his candidacy to national Republican plans to retake Congress and challenge the Biden administration, which he has squarely placed the blame on for nationwide inflation.

Meanwhile, Herring used his airtime to hammer Carter on voting with his party against bills that lower prescription drug costs, Herring claimed.

He asked Carter to explain why he voted against a measure to cap the cost of insulin, a drug to treat diabetes, to $35 under insurance or Medicare.

“I’m up there to do something about (prescription drug costs),” Carter said. “But this cap on insulin wasn’t the way to do it. That’s not going to lead to innovation, all it’s going to do is cap the price.”

In the interview, Carter didn’t say that. But he did say he wanted to get Republicans to take control of Congress in order to scrap Biden’s Inflation Reduction Act.

The Act does have measures that reduce drug prescription costs for some Americans.

One of the more contentious moments in the debate came when Carter had to explain how he separates his finances from his votes.

Carter was named the 10th wealthiest member of Congress in 2020, according to an analysis of 2019 financial disclosures by Open Secrets, a nonprofit in Washington DC that tracks money in Congress.

Carter entered Congress with a net worth of just over $20 million. In 2020, his net worth had more than tripled to over $66 million, Open Secrets said.

Coker, the panelist, had to ask Carter twice to explain to Coastal Georgia voters how he recuses himself from legislation in Congress that may involve financial interests.

“It’s not like I’m getting this intel or anything about what’s going to be happening,” he said.

Carter said he won’t apologize for working hard and being successful. He also disputed the $66 million figure tabulated by Open Secrets. After the debate, Rep. Carter’s office renewed the objection to the numbers, and said “As has been acknowledged by the House Ethics Committee, Mr. Carter does not exercise direct control of the vast majority of his investments as they have been determined to be excepted investment funds. He complies with all disclosure requirements and completes annual training to ensure compliance.”

Lawmakers file annual financial disclosures revealing their finances in ranges. To estimate net worth, OpenSecrets averages the maximum and minimum value of lawmakers’ assets and debts. The most recent estimates published by OpenSecrets come from 2019 congressional disclosures.

After Carter was asked about this, Herring took the chance to criticize not only Carter’s personal finances but the finances of his campaign.

Both Carter and Herring addressed other key issues in the district, like climate change and abortion access.

Carter said he acknowledges the existence of climate change but says you can’t “let policy get ahead of innovation” by regulating energy and promoting green energy sources.

On abortion access, Herring said he wants to protect 1st District voters from criminalization for seeking an abortion.

Since the US Supreme Court invalidated Roe v. calfthe unofficial right to an abortion for Americans, Carter cheered the decision and said it allows the states to make their own decisions.

“The federal government should not have the say,” Carter said of the ruling’s implications.

However, since last year, Carter has co-sponsored two federal bills along with his party that would criminalize abortions made after 15 and 20 weeks. They included exceptions for rape and incest or if the life of the mother was at stake.

Carter accused Democrats and Herring of wanting to allow for abortions with no limits.

“They want you to be able to have an abortion up until the time of birth and have the taxpayers pay for it,” Carter said. “And now he wants to go to Washington DC and be a rubber stamp for that kind of policy. That’s not representative of the 1st district of Georgia.”

Herring called it simply untrue and that Carter should be “ashamed” of that statement.

Carter wasn’t alone in having to answer tough questions.

Herring was asked how he, a 63-year-old white corporate lawyer, would be able to connect to the 1st district’s Black voters, who make up 70% of the Democratic electorate who might distrust him.

“I don’t know the source of the question, but I’ve worked very hard to represent everybody in the district,” Herring said. “Right now, we don’t have that. We have someone who represents himself and wealthy corporations.”

Herring was also asked about his career defending big businesses in lawsuits brought by workers and employees, while, at the same time, he criticized Carter as being in the pocket of big business.

“Most of my clients have been small businesses to medium-sized businesses and what I’ve done is work with them to be a trusted advisor, a listener, a learner, a problem solver,” Herring said.

He emphasized the organizations he volunteers for and called out how Carter accepts campaign money from the pharmaceutical industry.

While it’s difficult to calculate the majority of Herring’s clients over the course of his career, his profile on his law firm’s website specifically highlights cases where he represented major corporations.

His law firm’s website shows he defended corporations like Gulfstream and American General Life And Accident Insurance Company against claims by workers they were discriminated against or lost out on benefits.

Rep. Carter is running to hold onto his seat in what has been known as a “safe” Republican district. He has won by margins of more than 15% in three of his four last elections. In 2016, he ran unopposed.

He has higher aspirations as well: Carter previously spoke with former President Donald Trump about an endorsement to run against Sen. Raphael Warnock. Since Herschel Walker stepped in to run against Warnock, Carter is now gunning for chairman of the House Budget Committee, a powerful post that sets the agenda for the government’s purse strings.

Carter said, “Should he be re-elected and elevated to chairman of the House Budget Committee, he would seek to overhaul Medicare and Social Security benefits,” according to a Bloomberg News article. That might include gradually raising the age an American can access Social Security money from 62 to 70 years old and the age an American can get Medicare from 65 to 67 years old, the news story said.

His other campaign planks included limiting the size of government by cutting regulations, reducing healthcare costs, and strengthening national security, according to Carter’s campaign website, which is light on specifics.

Herring said he decided to challenge Carter after watching the Georgia Congressman vote to overturn the 2020 election results a day after January 6, 2021, when election deniers stormed the US Capitol.

Herring has accused Carter of putting “politics above our country, our district and our families.” Since then, the Savannah lawyer has focused on issues like abortion access, protecting the coast from climate change, and gun safety measures. In recent weeks, Herring has sought to emphasize Carter’s numerous financial interests and campaign contributions from the pharmaceutical industry, dubbing him “Big Pharma’s Favorite Son” in a recent ad.

Because of the rapid growth of Bryan County and western Chatham County, Carter’s district lost territory to the southwest and gained some density within the coastal counties.

The redistricting process is supposed to make sure every state representative serves about 765,000 people.

The 1st Congressional District includes 15 counties but the bulk of the voting muscle exists in the core Coastal Georgia counties – Chatham, Bryan, Liberty, McIntosh, Glynn and Camden – where 555,527 people live, according to census numbers.

Over 366,000 of those residents are registered voters as of Dec. 2021, according to the secretary of state’s office.

The demographic breakdown for everyone in those counties, not just voters, is as follows: 64% white, 30% Black, and 7% Hispanic, recent census numbers show.

Early voting is underway in Georgia and Election Day is 3 weeks away.

The two candidates are scheduled to debate again at 7 pm Wednesday on WTOC-TV in Savannah.