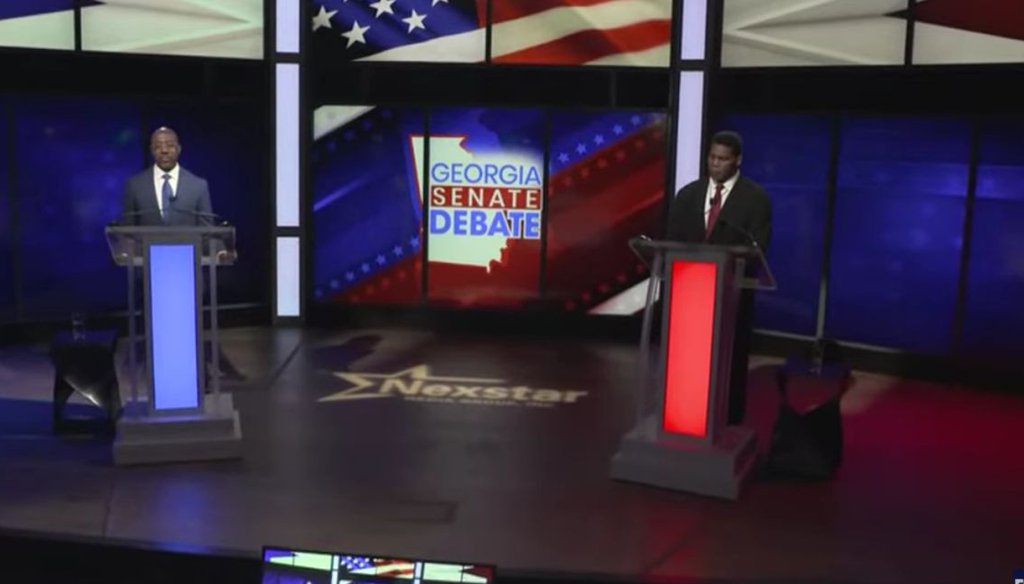 In what’s expected to be the only debate of the pivotal Senate campaign in Georgia — just before the Oct. 17 start of early voting in the state — the two nominees, incumbent Democrat Raphael Warnock and Republican challenger Herschel Walker, sparred over a variety of topics.

During the hourlong debate in Savannah, Walker, an abortion opponent, pushed back against allegations that he had on two occasions urged the mother of one of his children to get an abortion and that he paid for the procedure when the woman followed through. “That’s a lie and I’m not backing down,” he said.

Walker also parried an accusation from Warnock that he had pretended to be a police officer, pulling what appeared to be a law enforcement badge from his pocket before being stopped by the moderators, who said the debate’s ground rules didn’t allow “props.” Previous reporting suggested that Walker had been named an “honorary deputy” in Cobb County, a position that does not come with policing power, and that he had also falsely claimed that he had been an FBI agent.

Here are a few of the other claims by the candidates, with our quick assessment of their accuracy.

Warnock: “We lead all the western nations” in maternal mortality.

The United States had a higher maternal and infant mortality rate in 2020 than any western European nation belonging to the Organization for Economic Cooperation and Development, a group of advanced industrialized nations. The US also has a higher rate than Canada, Australia, Israel, South Korea, Japan and New Zealand.

Warnock: “He says no exceptions (on abortion) even in the case of rape, incest, or the life of the mother.”

During the debate, Walker cited his support for a law in Georgia that has exceptions for those situations. But Walker has offered a more stringent position in the past.

In May, he told reporters after a campaign event in Macon that “there’s no exception in my mind. Like I say, I believe in life. I believe in life. … You never know what a child is going to become. And I’ ve seen some people, they’ve had some tough times, but I always said, ‘No matter what, tough times make tough people.'”

Walker: Warnock “voted with Biden 96% of the time.”

A regularly updated tally by FiveThirtyEight.com shows Warnock voting with Biden’s position 96.4% of the time. That’s clearly a high level of support, but it ranks in the lower one-third of the Democratic caucus. Most Democrats and most Republicans tend to cluster together in their voting patterns, with few Democrats breaking with Biden and few Republicans frequently supporting Biden.

Walker: “Right now people have coverage for health care. It’s a question of what type of health care do you want. Because if you have an able-bodied job, you’re going to have health care.”

Although millions of Americans do secure health insurance through an employer, “not all workers are offered employer-sponsored coverage or, if offered, can afford their share of the premiums,” according to the Kaiser Family Foundation, a nonprofit that studies health care policy . Overall, the foundation says, “most people who are uninsured are noneelderly adults and in working families.”

Walker: “I tell anyone out there suffering from any type of mental illness, ‘You can get help. All you’ve got to do is ask.”

Medicaid, the federal-state health insurance program for lower-income Americans, does cover mental health care, as do the plans offered under the Affordable Care Act. However, uninsured Americans may have trouble accessing mental health care, at least on a continuing basis, rather than on an emergency basis.

Walker: Georgians should “get off the government health care and get on the health care (Warnock’s) got.”

This is somewhat nonsensical.

As a member of Congress, Warnock is eligible to receive employer-sponsored coverage, but because his employer is the federal government, it is, in a sense, government health care. Congressional coverage is organized under DC Health Link, an insurance program created under the Affordable Care Act.

Under DC Health Link, the federal government contributes up to “72% of the weighted average” of all premium plans, according to the Congressional Research Service.