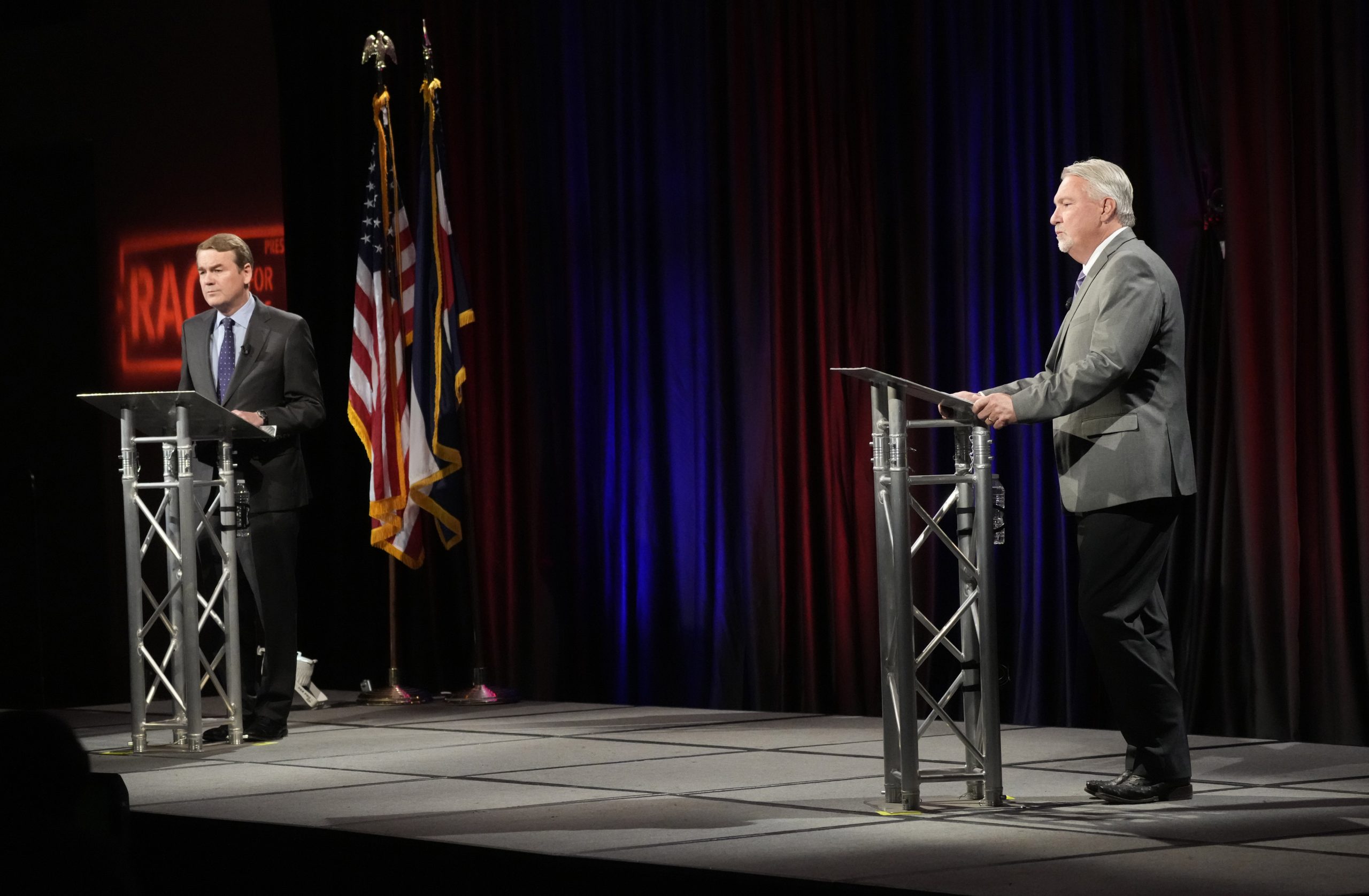 The debate, hosted by 9News, KRDO-TV and Colorado Politics, is the final one scheduled between the men before Election Day. Polling has consistently indicated the race is Bennet’s to lose, and O’Dea came out firing in what will be one of his final opportunities to swing the pendulum.

Here are the big moments from the face off:

Bennet repeatedly defended his support for Democratic spending measures in Congress aimed at protecting the American economy from tanking during the COVID-19 pandemic but that have been partially blamed for causing inflation that’s higher than it has been in four decades.

When asked by O’Dea whether he regretted the spending, Bennet said “I regret the inflation that people are facing because of the broken supply chain globally.” Bennet also attacked the oil and gas industry for having record profits amid rising energy costs.

The Unaffiliated is our twice-weekly newsletter on Colorado politics and policy.

Each edition is filled with exclusive news, analysis and other behind-the-scenes information you won’t find anywhere else. Subscribe today to see what all the buzz is about.

“They’re using those record profits not to help consumers here in Colorado pay at the pump, not to help on diesel, but to buy back stock to do financial engineering,” Bennet said.

Bennet was also asked by the moderators whether the title of Democrats recent climate, taxation and medical care policy measure, titled the Inflation Reduction Act, was misleading since it won’t meaningfully reduce inflation in the near term.

“I don’t think we’ve misled the American people and I don’t think the spending is going to make (inflation) worse,” Bennet said. “Unlike the Trump tax cuts, this bill was actually paid for.”

O’Dea, who has blamed Bennet for inflation, said Congress should reduce the size of the federal government, but he said he doesn’t want to cut welfare programs such as Social Security and Medicare. The moderators pressed him on why he has supported federal spending on infrastructure — which as a construction company owner he would benefit from — while pushing for cuts elsewhere.

Bennet called O’Dea’s response “insulting” and blasted him for not backing provisions in the Inflation Reduction Act aimed at driving down health care costs.

One of the clearest divisions of the night came during a discussion about the Obama-era Deferred Action for Childhood Arrivals Program, which temporarily shields people brought to the U.S. illegally as children from deportation.

DACA is a fulcrum — and sometimes a bargaining chip — in the immigration policy debate.

O’Dea supports giving DACA recipients, including the roughly 20,000 in Colorado, a pathway to citizenship, but he doesn’t support a standalone measure to do that. “We need a comprehensive bill,” he said. “We need one that safes up and secures the border, which includes putting up a barrier to give working sheriffs, Border Patrol a break down there.”

He called the immigration system broken and estimated that it will cost $40 billion to shore up the border and hire 18,000 new Border Patrol agents.

“Unfortunately, the president Joe O’Dea voted for twice (President Donald Trump) after he called Mexicans rapists on the first day of his campaign made it impossible for the national Republican Party to move forward on immigration,” Bennet said.

“Michael Bennet doesn’t get results,” O’Dea claimed again and again during the debate, attacking the senator over the fact that only one standalone bill he’s introduced in his 13 years in the Senate has been signed into law without being attached to another measure.

“You’re a liar, Joe,” a frustrated Bennet fired back at one point.

The one bill was Senate Bill 1541, a bipartisan measure from 2011 that expanded the eligibility for membership in the nonprofit Blue Star Mothers of America to include grandmothers and other guardians who have children serving in the military. It also expanded membership to eligible mothers living outside of the U.S.

But there’s a lot more to the story.

Twelve other bills introduced by Bennet have been combined with other measures that were signed into law, according to GovTrack.us, an online tool used to track bills and members of Congress. The legislation spanned a wide range of topics, from the environment to trying to tackle childhood hunger to helping develop genetically targeted drugs.

By Bennet’s campaign’s count, the senator has worked closely on more than 100 pieces of legislation that were signed into law. The campaign arrived at that number by counting bills Bennet was an original cosponsor of, meaning he signed on at the time it was introduced and likely had a major role in shaping the policy.

The Colorado Sun examined Bennet’s record at length in this story.

Bennet repeatedly attacked O’Dea for voting twice for Trump and asked O’Dea why he doesn’t want the former president to run for reelection in 2024.

“Well, I started thinking about Joe Biden serving another four years,” O’Dea said. “We can’t take any more of these democratic policies.”

O’Dea didn’t define the areas in which he disagrees with Trump.

Trump lashed out at O’Dea earlier this month after O’Dea said on CNN that he would actively campaign against the former president should he run in 2024. Trump called O’Dea a RINO — Republican in Name Only — and said in a post on his Truth Social social media site that “MAGA doesn’t Vote for stupid people with big mouths.”

To learn more about the O’Dea-Trump dynamic, check out this story.

Another area of sharp contrast during the debate came during a segment on the future of the U.S. Space Command headquarters, which was ordered relocated to Alabama from Colorado Springs in the final days of Trump’s presidency. Democrats and Republicans criticized the decision as being politically motivated.

O’Dea has said Bennet should hold up Biden administration nominations and block the passage of Democratic bills until he gets a guarantee Space Command will remain in Colorado.

“I would use my seat to make sure we keep Space Command here in Colorado,” O’Dea said. “It’s that important. Instead of doing a photoshoot over at Camp Hale, what I would have done is (dragged) the president through Colorado Springs and I would have showed him how important it is to Colorado Springs economy.”

O’Dea was referencing President Joe Biden’s recent trip to Colorado to designate Camp Hale and the surrounding federal land a national monument at the request of Bennet and other Democrats in Colorado’s congressional delegation.

It was Trump, who O’Dea voted for twice, Bennet repeated again, who “made that horrible political decision” to move Space Command to Alabama. Bennet said he has been pressing the Biden administration — “every level of the White House and every level of the Department of Defense” — to keep the headquarters in Colorado and that he wants to keep politics out of the process.

“I believe, in the end, that the argument is so compelling on national security grounds that we’re going to be able to get this over the finish line,” he said. “It’s going to cause a gazillion dollars to move it to Alabama. Those arguments are it’s going to be stood up much more quickly here than in Alabama. Those arguments are that the people that work at Space Command, half are civilians who don’t want to move from Colorado to Alabama.”

During a quick segment on guns, O’Dea said he doesn’t support any more national gun laws beyond making background checks universal. “We’ve got plenty of laws on the books,” he said.

Bennet said he supports increasing the age to buy “assault rifles” — a term that wasn’t defined — to 21 and he supports a ban on the sale of “assault weapons,” which also wasn’t defined. He said he doesn’t support imposing a 10-day waiting period between when people can purchase guns and access them.

O’Dea didn’t answer a question about whether he supports the red flag law in Colorado, which allows judges to temporarily order the seizure of guns from someone deemed a significant risk to themselves or others.

O’Dea and Bennet attacked each other for being too closely aligned to their respective political parties.

Bennet said there have been several times when he’s disagreed with Biden.

“I think he made a serious mistake when he went to Saudi Arabia. I said before he went there that he shouldn’t go to Saudi Arabia,” Bennet said of the president’s visit to the country in August amid high gas prices in an effort to try to get Saudi Arabia to increase its oil production.

“I think he made a serious mistake with Title 42, and I said before he did it that he shouldn’t do it,” Bennet said. Title 42 is a policy enacted during the pandemic by Trump that allowed for the quick deportation of unauthorized immigrants. The Biden administration tried unsuccessfully to roll it back earlier this year. Bennet argued lifting Title 42 would “make a bad situation even worse” as the U.S. tries to secure the border.

Bennet also said he has disagreed with the Biden administration’s policy around solar energy. Specifically, he opposed investigating the solar component imports from Asian countries, which he said would paralyze the renewable energy industry.

O’Dea pointed to the Affordable Care Act, also known as Obamacare, when asked for an example of where he’d buck Republican leadership in the Senate.

“I believe Obamacare, the pieces that are left should be left in place right now,” he said. “My employees want pre-existing conditions (covered) as part of an insurance program going forward.”

One thing to keep in mind

Bennet and O’Dea attacked each other over their wealth during the debate.

O’Dea criticized where Bennet’s money is invested even though Bennet has placed it in a trust that he doesn’t control. The Daily Beast reports some of the senator’s money is in a fund that invested in Puerto Rican debt.

Bennet criticized O’Dea for being among the richest people in Americans who “are getting away with murder. They’re not paying their taxes. They’re never audited.”

It’s actually unclear which of the two men are wealthier.

The public has until Dec. 20 to weigh in on three options that seek to keep Lake Mead and Lake…

“Unlike wealthy politicians who can go without a paycheck, I, like many families across the 8th District, cannot go months…

How do you vote in Colorado when you’re in jail?