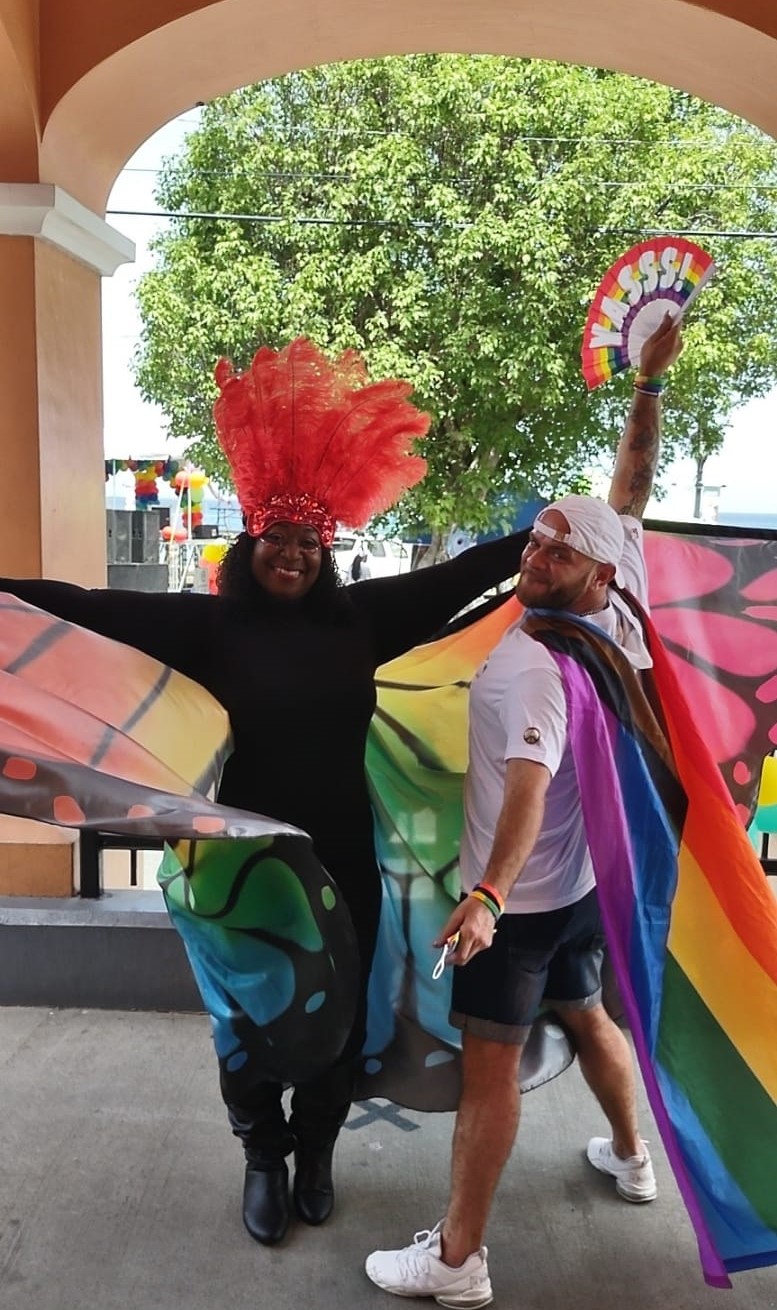 All Tea, No Shade to many who have blazed the road for positive queer representation in the US Virgin Islands. However, we really need to say a huge thank you to the St. Croix community for the support and representation of the LGBTQ+ community it received during the ongoing events of PRIDE 2022. Organizers are saying they hat they did not anticipate the love and acceptance they met on June 18, 2022. For a moment it felt like we were all equal, unified, as one people on Strand Street in the town of Frederiksted. The endeared Ingeborg Nesbitt Clinic was adorned with a rainbow of diversity. FHC provided great inspiration, as host. We are grateful for the incredible presence of the FHC nursing team that is led by LaTonya Nesbitt, Director of Nursing. Nesbitt is a direct descendant of the historic buildings’ namesake.

Together, many people of our community came out and celebrated each other’s uniqueness with dance and laughter. There was no divide. For a moment everything and everyone was beautiful. We felt safe to be Crucian, Black, Latin, brown or white, and LGBTQIA2S+ (an acronym for Lesbian, Gay, Bisexual, Transgender, Queer and/or Questioning, Intersex, Asexual, Two-Spirit, and the countless affirmative ways in which people choose to self-identify).

We are thankful to the unstoppable spirits of Masserae Sprauve Webster (FHC-CEO, Edwin Nieves (FHC-DSCP), Robert “Bobby” Thompson (VI-DOH & 1LUV), STX Pride Inc., and the owners of Sand Castles Resort and the numerous stakeholders that participated in the health fair.

However, we cannot take our eye off the oppressive forces that are lurking the halls of injustice. According to GLAAD, Black and brown LGBTQIA2S+ people are likely to experience economic insecurity than their non-LGBTQIA counterparts, with a majority (56%) of Black LGBTQ people living in low-income households and in the US South (51.4%), where most states lack nondiscrimination protections. This marginalized population of people have their own unique lived experiences, different from their non-Black and brown LGBTQIA2S+ and non-LGBTQIA2S+ counterparts.

It is important that the media outlets and communication professionals in the public and private sectors of the US Virgin Islands be aware of these statistics and not, unintentionally nor otherwise, perpetuate stereotypes or spread stigma associated with these factors. Also, consider the ways language use, source selection, and framing might exacerbate already unsettled conditions of this community on these Virgin Islands.

LGBTQIA2S+ health care disparities are still a significant issue and on the rise because it is affected by so many external factors. Our peoples’ (meaning queer people) physical, emotional and mental health, including lower incomes, lack of paid sick leave, and discrimination in accessing healthcare because of class, race, sexual orientation, gender identity, and/or gender expression. Proximity to environmental risks can also affect health. In addition, LGBTQIA2S+ people and youth experience health disparities because of lack of support at home, school, or other unsafe social spaces throughout our islands. In other words, the key to LGBTQIA2S+ health is not a theoretical difference in biology or behavior between LGBTQIA2S+ people and cisgender, straight people, but in the many challenges and stigmas that make LGBTQIA2S+ people vulnerable to illness. In fact, the LGBTQIA2S+ has been identified as a health disparity population by the

National Institute on Minority Health and Health Disparities is in need of increased National Institutes of Health research. Data on LGBTQIA2S+ health is lacking. One of the major impediments to understanding the reality of LGBTQIA2S+ health is a lack of data collection. Many national LGBTQ organizations have made data collection one of most critical priorities during the COVID-19 pandemic, when data about the impact on LGBTQ people was not collected until months after it began. Data that does exist shows deep disparities for LGBTQ people, and significant differences between LGBTQ patients and providers — including the mistaken belief by providers that most patients will not discuss sexual orientation or gender identity if asked. This lack of data will have ongoing and compounding effects on LGBTQ people, including the study and impact of other diseases and epidemics such as cancer rates.

While blatant discrimination may be illegal, the healthcare industry is still affected by societal homophobia, biphobia, and transphobia, negatively affecting the quality of healthcare that LGBTQ people receive. According to a 2021 public statement from GLMA: Health Professionals Advancing LGBTQ Equality, more than half of all medical schools lack any LGBTQ-focused health training beyond treating HIV.

A 2018 Kaiser Permanente report shared that more than half of lesbian, gay, and bisexual people reported that they have faced cases of providers denying care, using harsh language, or blaming the patient’s sexual orientation or gender identity as the cause for an illness. Up to 39% of transgender people have faced some type of harassment or discrimination when seeking routine healthcare, including being denied care outright or encountering violence in healthcare settings. There are currently just over 200 LGBTQ-specific healthcare centers in the United States, but not all of them provide services like mental health or have pharmacies. Thirteen states have no LGBTQ-specific healthcare centers at all. LGBTQ people who live in rural areas or in those 13 states have little to no access to LGBTQ-specific care.

Anti-LGBTQ activists are targeting healthcare access. In May 2021, President Joe Biden reversed Trump-era policies and restored federal protections for LGBTQ people seeking healthcare. While protections have been restored at the federal level, some states are still targeting and limiting LGBTQ healthcare.

In 2021, for example, Arkansas and Ohio passed laws allowing providers to deny care to LGBTQ people based on religious objection. And two states, Arkansas and Tennessee, passed laws in 2021 banning or limiting gender affirming care for transgender youth. Other states proposed bills that penalize parents who provide gender affirming care for their trans children, as well as bills that punish school employees who keep a student’s transgender identity from their parent.

Gay and bi men are also still subject to a discriminatory deferral period when donating blood or plasma. It is now a three-month waiting period instead of a year-long or lifetime ban, thanks to advocacy efforts from medical organizations as well as LGBTQ organizations, including GLAAD. GLAAD continues to Federal Department of Agriculture to remove the deferral period altogether in favor of risk-based screening, noting that any policy based on sexual orientation alone is unscientific and discriminatory.

The American Medical Association has stated that treatment for gender dysphoria is medically necessary care which can involve changing the body to align with a person’s gender identity (their internal sense of their own gender). However, until very recently, private insurance companies treated transition-related medical care as if it were cosmetic — regularly inserting “transgender exclusion clauses” into health insurance plans. This can make access to care difficult, if not impossible, for most transgender people. In 2016, the Department of Health and Human Services issued a rule stating that under the Affordable Care Act of 2010, people are protected from discrimination based on gender identity and sex stereotyping in healthcare settings that have a connection to federal funds, which includes the vast majority of health insurance companies. This was a huge step forward in improving access to healthcare for the transgender community. However, not all procedures associated with medical transition are covered by this ruling, and any policy that does not receive federal funds may still discriminate. Furthermore, even if a transgender person has a health insurance policy which will cover medical transition, it can still be quite difficult to find healthcare providers who are knowledgeable about transgender health care, and force many queer people off-island for medical care.

Yet, as these intersectional injustices have risen to the forefront of public consciousness, several aspects of major, long-running issues regarding disparities in healthcare has returned the movement—in some ways, to its protest-driven origins.

Here in the US Virgin Islands, we must celebrate every small victory as if it was a major event. However, remaining steadfast with a territorial agenda for equality for all people, yet, actively supporting the national platforms for LGBTQ-IA persons.

Editor’s note: Rodney Santiago-Kidd is the director of the Frederiksted Health Care Inc. Division of Human Resources and Corporate Compliance on St. Croix.