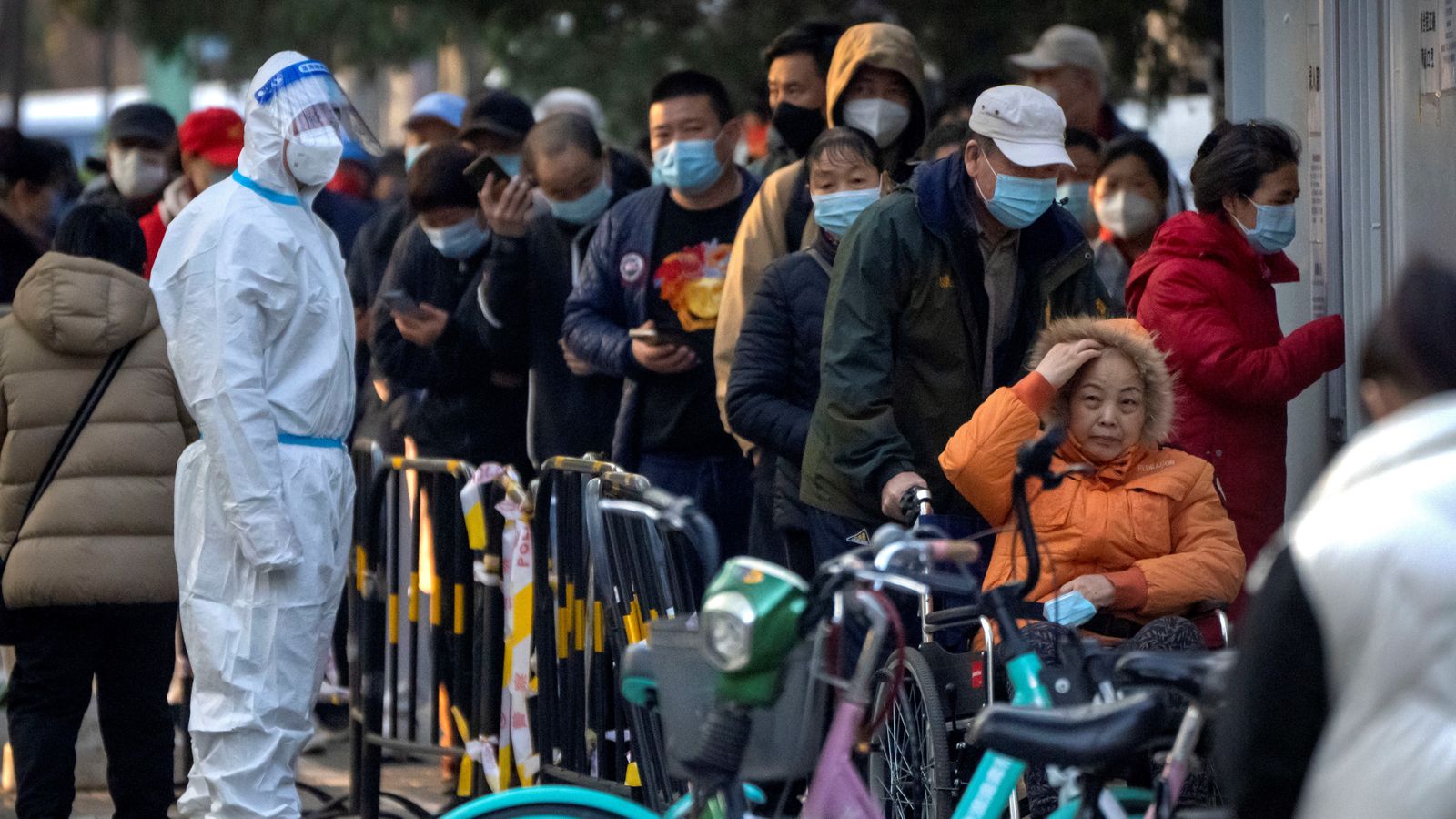 In the past week, the Chinese Communist Party (CCP) government has initiated a dangerous shift in policy away from the Zero-COVID elimination strategy which has been in place across China since the beginning of the pandemic.

The clearest evidence for this change is last Friday’s issuance of 20 measures by the National Health Commission (NHC) which curtail every aspect of the Zero-COVID policy, under conditions in which daily new cases have risen over tenfold since late October. According to Our World In DataChina’s seven-day average of daily new cases now stands at 15,897 and is on pace to reach an all-time high in the next week.

The 20 measures include a reduction of mass testing protocols, restrictions on the ability of localities to issue lockdowns, a shortening of quarantine times for close contacts of people infected with COVID-19, a loosening of travel restrictions to and within China, the ending of contact tracing for secondary contacts, and more.

Despite a weeks-long surge of cases in Guangzhou, officials there have refrained from implementing a citywide lockdown, and growing waves in other large cities throughout the country have not prompted lockdowns for the first time since the initial lockdown of Wuhan began on January 23, 2020

Also included in the 20 measures were pledges to accelerate vaccination programs, build health care infrastructure and stockpile medicines, clearly in anticipation of a nationwide surge of COVID-19 infections and hospitalizations. On Thursday, leading NHC official Guo Yanhong announced that the country will build more hospitals that specialize in treating moderate and severe COVID patients, while ensuring that intensive care units comprise 10 percent of all hospital beds.

The 20 measures were announced one day after Chinese President Xi Jinping held a meeting on the pandemic with his new Politburo Standing Committee, the first since the conclusion of the CCP’s 20th Congress on October 23.

At that Congress, Xi presented the fallacy of “socialism with Chinese characteristics,” distorting the reality that the restoration of capitalism has produced a vast growth in social inequality and class tensions within China. In early 2020, fearing social revolution amid a spiraling public health crisis, the CCP first implemented Zero-COVID in order to prevent the collapse of the country’s health care system and maintain national stability.

Despite the immense significance of China’s Zero-COVID policy, which for over two years has saved millions of lives and proven that elimination is possible, the nationalist basis of this policy has always rendered it unviable in the long term. Just as “socialism with Chinese characteristics” is a nationalist delusion, maintaining Zero-COVID in a single country is impossible. By lifting this policy, Chinese society now directly confronts “COVID with imperialist characteristics.”

For more than two years, US imperialism has exerted unrelenting pressure on China to lift its Zero-COVID policy as part of its broader efforts to military encircle and subjugate the country. Countless columns have been published denouncing China’s public health policies for their impact on corporate profits, demanding they be scrapped no matter what the cost in human lives.

Over the past year, China has been repeatedly bombarded by the highly infectious and immune-resistant Omicron variant, which evolved in 2021 due to the unhindered spread of the virus outside the country. Last spring, the Omicron BA.2 subvariant caused China’s largest surge of infections to date, centered in Shanghai. After this surge was successfully suppressed, itself a triumph of public health, smaller waves have affected different parts of the country on a near-continuous basis, straining testing capacity in many cities.

Efforts to maintain Zero-COVID have become increasingly costly, with the World Bank predicting in late September that China’s GDP growth will shrink by over 5 percent this year.

It appears that a tipping point was reached when Apple threatened to shift production away from China after a major COVID-19 outbreak at the notorious Foxconn sweatshop in Zhengzhou, the world’s largest iPhone factory, severely disrupted production ahead of the peak holiday shopping season. By lifting Zero-COVID, the CCP clearly seeks to reintegrate with the world economy and fully restore capitalist production, symbolized by Xi’s maskless participation in the G20 summit this week.

The full implications of the lifting of Zero-COVID will emerge in the coming weeks and months. It is clear that the CCP has not yet adopted the mass infection “herd immunity” policy which has been universally embraced in the West, and their current policy could now be described as the most stringent mitigationist strategy possible.

However, the objective laws of viral transmission are relentless and the situation could quickly spiral out of control. Any shift away from a Zero-COVID elimination strategy carries with it the potential for a monumental catastrophe. In this regard, the experiences in New Zealand and Hong Kong over the past year are most illustrative of the coming dangers.

In Hong Kong, which is densely populated and comparable to the conditions in most major Chinese cities, the lifting of Zero-COVID last February rapidly caused a surge of infections which led to the highest per capita daily death toll seen anywhere in the world since the start of the pandemic. Due to relatively low vaccination rates among the elderly, in the span of three months Hong Kong went from only 213 deaths to 9,346, a cumulative per capita death toll roughly helped that of the United States, where over 1.1 million Americans have been killed by COVID -19

In New Zealand, repeated waves of infection have inundated hospitals and given the country one of the highest per capita death rates in the world throughout much of this year. Since November 2021, the country’s death toll has climbed from only 31 to 2,154.

COVID, Capitalism, and Class War: A Social and Political Chronology of the Pandemic

Mehring Books, the publishing arm of the Socialist Equality Party (US), is proud to announce the publication in epub format of Volume 1 of COVID, Capitalism, and Class War: A Social and Political Chronology of the Pandemica compilation of the World Socialist Web Site‘s coverage of this global crisis.

Ominously, conditions in China are closer to Hong Kong than New Zealand. In Shanghai, only 71 percent of people aged 60 and older have had two doses of vaccine and only 46 percent have received a third booster dose, and comparable figures exist in many other cities. Most of the Chinese population has been vaccinated with the CoronaVac vaccine, which has been shown to be less effective than the mRNA vaccines at preventing hospitalization and death.

If the situation in mainland China does spiral out of control, it would be a world historic tragedy. China is home to 1.4 billion people, one-sixth of the world’s population. A study published in May found that if Omicron were allowed to spread freely in China, in just six months there would likely be 112 million symptomatic cases, 5.1 million hospital admissions, 2.7 million ICU admissions and 1.6 million deaths. The real-world outcomes could be far worse than those predicted by this model, particularly given the evolution of even more infectious and immune-resistant variants over the past six months.

Beyond the acute crisis during the initial surge, Chinese society would also be confronted with the long-term ramifications of chronic post-viral illness. In the United States alone, official figures indicate that at least 20 million Americans are now suffering from long-term sequelae known as Long COVID, which can cause a wide range of symptoms affecting nearly every organ in the body. Up to 4 million Americans are so profoundly disabled by Long COVID that they have entirely left the workforce.

Extrapolated for the Chinese population, if the “herd immunity” strategy pursued in the West is eventually adopted, upwards of 85 million Chinese people could end up suffering from Long COVID, including over 15 million completely disabled by the virus.

By lifting Zero-COVID, China will face growing pressures to fully embrace the dystopian “forever COVID” policy pioneered in the United States and adopted by nearly every world government, in which unending waves of infection will repeatedly reinfect ever-growing sections of the population for the foreseeable future. A recent study found that each reinfection with COVID-19 compounds one’s risk of death, hospitalization and Long COVID.

Whatever pragmatic economic and political considerations are driving the CCP to lift Zero-COVID, the crisis they confront will in no way be resolved and could become far worse.

Depending on how quickly the virus spreads and begins to overwhelm hospital systems, it is possible that the CCP will reverse course and attempt to restore the Zero-COVID policy. However, in the absence of a globally coordinated strategy, this will become increasingly difficult.

The lifting of Zero-COVID is a political question which confronts the entire world’s population. Allowing the virus to spread in this immunologically naive population could provide it with over 1 billion new hosts in which it could further mutate and spawn new variants. This reactionary policy change in China thus poses the need for workers internationally to renew their struggle against the policies of their own governments and to unify across national boundaries.

As the World Socialist Web Site has continuously stressed, the only way forward to stop the pandemic is for the international working class to take matters into its own hands and fight for a Zero-COVID global elimination strategy. This entails the simultaneous deployment of every public health measure available, as well as the modernization of infrastructure to ensure that every public space is free of harmful viruses and bacteria. The fight for this program is indissolubly connected to the fight for world socialism, based on the prioritization of human needs above private profit.

Join the fight to end the COVID-19 pandemic

Someone from the Socialist Equality Party or the WSWS in your region will contact you promptly.