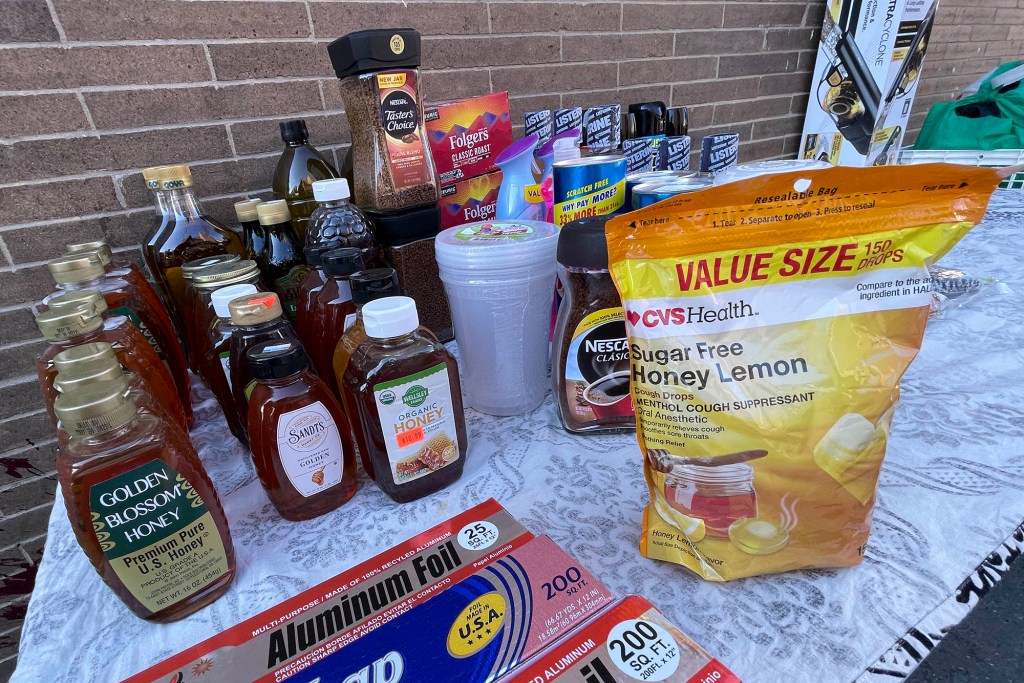 The prices are so low, it’s criminal.

An apparent black market for suspiciously sourced goods is up and running on the Lower East Side, where items are being hawked for a fraction of what they go for in the city’s shoplifting-plagued stores.

Palettes showing off a random assortment of items such as hygiene products, diapers and batteries, were spotted laid out on blankets for sale near the corner of 14th Street and 1st Avenue on Friday afternoon.

Two men with glassy eyes and slurred speech were seen at the open air market with reusable shopping bags filled with Oil of Olay moisturizers, Gillette Daisy razors, Shea Moisture body scrubs, Crayola markers and two Jouviance face creams, one of which still had a CVS tag on it.

The men were selling the Oil of Olay products and Jouviance creams for $5 and $10 a pop respectively but at a CVS one block away from the outdoor market, the same items go for between $22.79 and $49.

Another merchant was spotted selling CVS brand Ibuprofen for $2 and Gillette replacement razors for $10 a pack — items that go for $8.59 and $46.99 at the nearby CVS.

Most of the hawkers would not respond when asked exactly where they sourced their bargain goods, though many of the items were among the most commonly shoplifted from city stores, according to workers and police sources.

When a staffer at the CVS was asked if shoplifters were reselling stolen goods from the store at the nearby market, they couldn’t say for sure but did confirm the store has seen a surge in retail thefts.

“This is a secondary market. … The stuff they steal, they sell. They sell ’em to stores,” explained a police source.

Other items for sale at the sidewalk shops included toothpaste, cold medicine, toothbrushes, Apple earphones and a myriad of grocery items, including loaves of bread, canned food and bags of potatoes, beans and carrots.

Most of the merchants stopped answering questions when they realized a Post reporter wasn’t there to shop.

Businesses in Manhattan have reported an uptick in retail thefts, which is up 14 percent so far this year compared to 2020, NYPD data show. Compared to 2019, retail thefts are down 31 percent.

On Tuesday, a shoplifter carrying about a dozen bottles of shampoo and conditioner was spotted scuffling with a security guard at a Manhattan Duane Reade right in front of The Post as it reported on an earlier armed heist at the same store.

Earlier this month, a man was caught on camera stealing 10 packages of meat from an East Village Trader Joe’s and shortly after, the Gristedes supermarket chain announced it was beefing up its security in response.

“We are hiring more and more security. We are hiring a lot of retired cops,” Gristedes owner John Catsimatidis said during a news conference last week.

“And the other thing we’re doing is we’re putting less in the meat cases. In other words, we replenish more often.”

Catsimatidis said shoplifting incidents at his stores have spiked between 40 and 50 percent recently.

Steak and fish retailers previously told The Post that shoplifters have been stealing pricey grocery items from their shops and reselling them to unscrupulous bodegas in other parts of the city, forcing them to jack up their prices or opt out of selling the gourmet items altogether.

Last week, a Manhattan Rite Aid that’s been plagued by a rash of shoplifting shut its doors. Staffers at the Hell’s Kitchen location previously told The Post brazen thieves stole more than $200,000 in merchandise in December and January alone.

“They come in every day, sometimes twice a day, with laundry bags and just load up on stuff,” one store employee told The Post, as two others nodded in agreement.

“They take whatever they want and we can’t do anything about it. It’s why the store is closing. They can’t afford to keep it open.”

A Rite Aid spokesperson didn’t address shoplifting concerns when asked for comment about the closure and said the Hells Kitchen store is one of 63 locations that are closing across the US — a decision that was made during the company’s third-quarter earnings call in December .