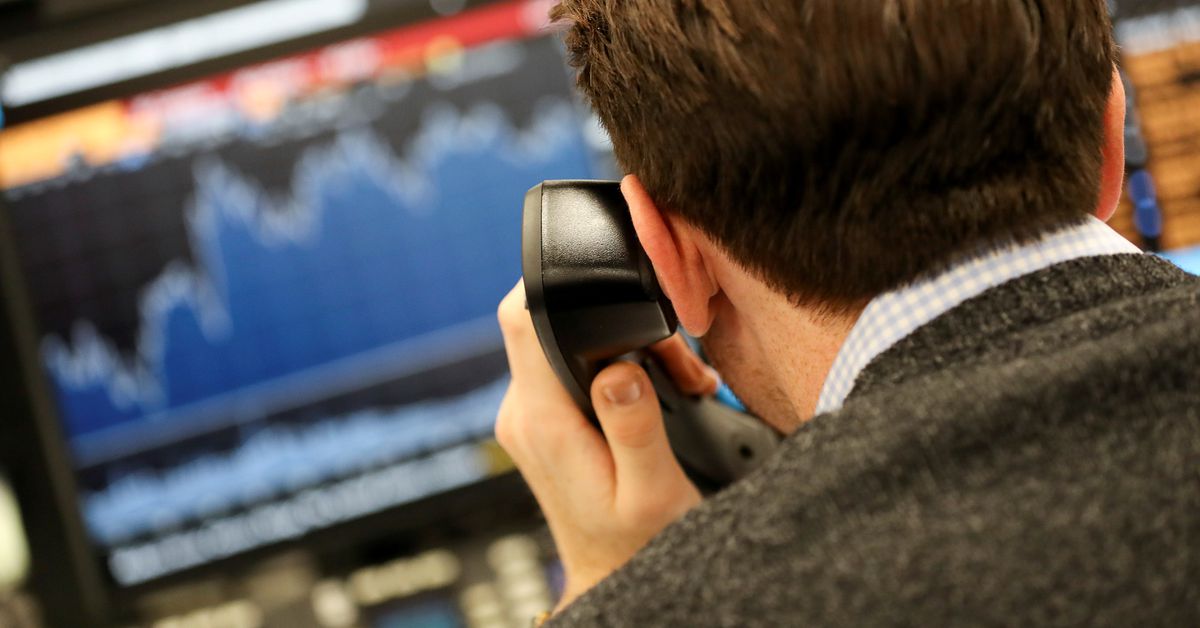 A broker looks at a graph on his computer screen on the dealing floor at ICAP in London, Britain January 3, 2018. REUTERS/Simon Dawson

NEW YORK April 29 (Reuters) – The US dollar index fell from 20-year highs and Wall Street equities sold off on Friday with the latest economic data and Amazon.com’s disappointing quarterly report and outlook keeping the spotlight on surging inflation.

In US Treasuries the benchmark 10-year yields capped off their biggest monthly gain since December 2009 by rising near their highest levels of the year after economic data.

Equities were under pressure after data showed that monthly inflation surged by the most since 2005 while US consumer spending increased more than expected in March amid strong demand for services. Also, first quarter US labor costs surged by the most in 21 years, pointing to rising wage inflation, supporting the Federal Reserve’s policy tightening. read more

Ian Lyngen, head of US Rates Strategy at BMO Capital Markets notes that the data could lead to a more hawkish response from the Fed.

“The operating assumption in the market at the moment is that the Fed has sufficient flexibility to ratchet up the pace of hiking in response to any further acceleration of inflationary pressures,” he said.

And on the last trading day of April, the global index was on course for its biggest monthly decline since March 2020.

Amazon (AMZN.O) shares were down about 16% after the e-commerce giant delivered a disappointing quarter and outlook late Thursday as it was swamped by higher costs to run its warehouses and deliver packages to customers. read more .

Russia’s rouble hit a two-year peak against the dollar and the euro on Friday as capital controls helped it weather another larger-than-expected interest rate cut and Russia appeared to make a last-gasp effort to avoid a default. read more

Other emerging market currencies also rallied on the dollar’s retreat.

While the dollar looked set to snap a 6-day advance against a basket of currencies on Friday it was still on track for its biggest monthly gain in seven years as concerns about the global economy and a hawkish Federal Reserve bolstered demand for the greenback in April . L2N2WR1KY

Benchmark 10-year US yields having risen as high 2.981% on April 20, its highest level since Dec. 2018, were on track to register five straight months of gains.

US crude futures settled lower after three straight days of gains as investors weighed fears over Russian supply disruption against the impact of COVID-19 lockdowns in China, the world’s biggest crude importer.

Gold prices rallied 1% on Friday after the dollar retreated, but the precious metal was set to end the month lower on bets of aggressive Fed policy tightening. read more

“The GDP data and the cost index for employment data showed that inflation was still running fairly hot, this is generally supportive for gold,” said Edward Meir, an analyst with ED&F Man Capital Markets.