The market is coming off an event-packed week that included the Federal Reserve’s May interest rate decision and the US jobs report. Global equity markets fell after the US central bank rattled investors as it ramped up its fight against inflation. The Nasdaq-100 Index (NDX) fell 0.99%, and the Dow Jones Industrial Average trimmed 0.24%. Treasury securities came under heavy selling following the FOMC, driving rates higher. Bitcoin prices tumbledreflecting the sharp evaporation in sentiment for risk assets.

Market-based bets on the Fed’s rate-hiking course were largely unchanged after Friday’s NFP. The April consumer price index is expected to drop at 8.1% y/y on Wednesday. That would be down from 8.5% in March. A weaker-than-expected print may help to ease some inflationary concerns. Regardless, it is likely to inject some volatility into the Treasury markets, and it may sway Fed rate hike bets. Short-term breakeven rates fell through the week, reflecting easing concerns over rising prices amid aggressive central bank action. That hurt gold prices.

The risk-off sentiment spilled over into the European markets that are already struggling with a dampened backdrop from the Ukraine conflict. The Stoxx 600 Index dropped 4.55% last week, its worst performance since February. The British Pound tanked to a fresh two-year low after the Bank of England signaled a higher risk of recession. European traders will be closely monitoring the stagflation risks in the coming weeks. The ZEW Eurozone economic sentiment survey is due out on May 10. A continuation of the recent drop in sentiment would likely push the sentiment index below its March 2020 to levels not seen since 2012. The Euro steadied against the Greenback amid ECB officials talking up the chance for a July rate hike.

Asia-Pacific stocks weren’t immune from the Fed-induced shockwave. The MSCI Asia-Pacific Index closed at its lowest level since August 2020. The ongoing lockdowns across China aided the bearish moves, with Chinese indexes seeing the sharpest declines across Asia. The risk-sensitive New Zealand Dollar fell to the lowest level since June 2020 versus the US Dollar. Across the Tasman, the Australian Dollar fared better, aided by the Reserve Bank of Australia’s hawkish shift. A consumer confidence report from Westpac is due out this week.

China’s Politburo, a group of high-ranking officials, reaffirmed the country’s commitment to its “Zero-Covid” policy. This caused analysts to grow even more pessimistic about China’s 5.5% growth target. Beijing may opt to cut lending rates soon to support growth. China’s consumer price index (CPI), due out on May 11, is expected to cross the wires at 1.9% y/y. A weaker-than-expected print would aid the PBOC’s route to ease policy.

US DOLLAR WEEKLY PERFORMANCE AGAINST CURRENCIES AND GOLD 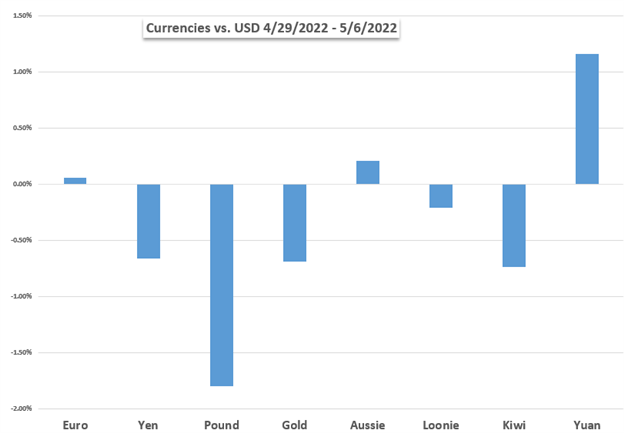 The euro continues to lag major central banks as far as rate hikes are concerned, leaving it vulnerable over the medium term despite warnings from ECB officials

The British Pound slumped further this week after the Bank of England (BoE) warned that UK growth may turn negative next year.

US Dollar Forecast: Focus Now Shifts to CPI Data and a Slew of Fedspeak Ahead

The US Dollar may remain on the offensive with Fed balance sheet tightening just around the corner. Ahead, all eyes are on US CPI and a slew of Fedspeak amid jittery markets.

The Australian Dollar got an initial kick from an RBA rate lift-off, but the Fed outdid them and the US Dollar soared. Want AUD/USD making new lows?

Brent crude extends its rally breaking through a key technical pattern, now looking to push higher, while the ban on Russian oil by the EU bolsters bullish bets.

Gold Price Rebound Vulnerable to Slowdown in US Consumer Prices

The update to the US Consumer Price Index (CPI) may rattle the recent rebound in the price of gold as inflation is expected to slow for the first time since August.

USD/CAD has rallied in recent weeks, buoyed by risk-off sentiment and hawkish Fed expectations, but its advance could be at risk as a key technical resistance could block its path higher.

US Dollar surged for a fifth consecutive week with USD still risking topside exhaustion uptrend resistance. The technical levels that matter on the DXY weekly chart.

Gold prices fell last week but trimmed some losses on Friday. Bulls may attempt to drive higher next week, but the technical situation doesn’t appear poised to sustain a rally.

It was a brutal week for the British Pound as the Bank of England warned of the possibility of a ‘sharp economic downturn’ while warning that inflation could climb above 10% in Q3.