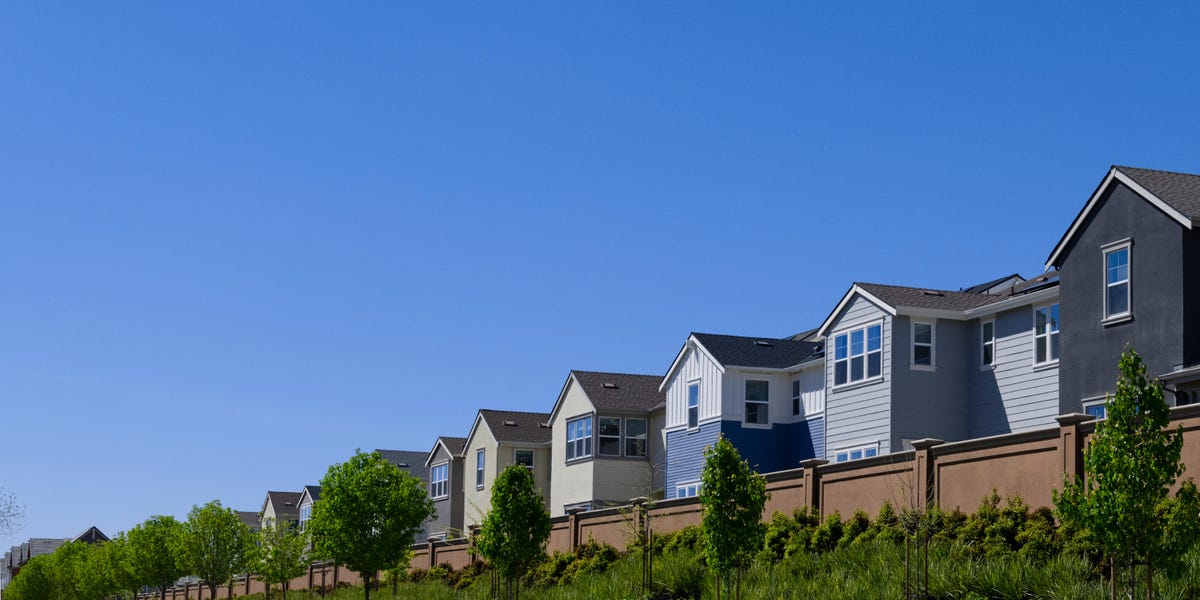 After a remarkable two-year hot streak, it appears that the US housing market could finally start to see something that resembles a balance between buyers and sellers.

But according to Ian Shepherdson, the founder and chief US economist at Pantheon Macroeconomics, the recent spike in mortgage rates has been something akin to throwing a bucket of cold water on a still blazing-hot market.

According to the Census Bureau and the Department of Housing and Urban Development, median home prices in the US have grown as much as 27.4% since the Q2 2020. But by the end of 2021, prices declined for the first time since early 2020. In Notes to clients in last week, Shepherdson detailed why the pace of growth of US home prices is set to slow down in a big way.

The most crucial factor is two-fold: slowing demand and rising interest rates. the

Raised interest rates for the first time since 2018 at their March meeting, and they are expected to hike rates several more times in 2022 as inflation remains at a four-decade high. This trend will continue to push mortgage rates higher, as well as other consumer-focused borrowing costs.

As mortgage costs have already started to rise, demand for new loans and refinances has fallen for three straight months, according to the Mortgage Bankers Association purchase index.

“The housing market is in the early stages of a substantial downshift in activity, which will trigger a steep decline in the rate of increase in home prices, starting perhaps as soon as the spring,” Shepherdson said in a report from last week.

“The average 30-year mortgage rate has risen by some 125 basis points since last September, increasing the monthly payment on a mortgage for a median-priced home by $412, or 27%, per month,” he elaborated. “That’s a huge increase, even for households sitting on savings accumulated during the pandemic — a one-time increase in savings can’t finance an increase in mortgage payments for the next 30 years — and it will push demand down a good deal further. “

Falling demand also wants impact housing supply. Shepherdson, who was one of several prominent economists and analysts that predicted the subprime mortgage crisis and housing crash of 2007-2008, pointed out that existing home sales have started to fall, which is helping add to the supply of houses on the market.

He predicts that the number of existing home sales are likely to continue falling in the months ahead, adding much needed inventory to the overheated housing market. He believes that sales will fall to 4.5 million by the end of this summer — a major contrast to the roughly 6 million existing homes that were sold this past February.

New home sales are also starting to fall — a trend Shepherdson says will continue — which is also helping add to the supply.

And it’s this combination of rising mortgage interest rates, falling demand, and rising inventory that are starting to bring down price growth, Shepherdson said.

“Prices recently have increased much faster than implied by the inventory numbers, perhaps because the shortage of inventory of existing homes has pushed up demand for new properties, but our second chart shows that they are starting to correct. This process has much further to run ,” he added in an email to clients on Wednesday, referring to the chart above.

Rent price growth will also begin to fall, likely next year, he said.

Some other notable real-estate market experts have also recently published research or made comments that line up with Shepherdson’s forecast.

Scott Brean, the head of fixed income strategy at Brean Capital, said on Wednesday that he anticipates price growth will start to “level off” later this year, falling to around 4-8% growth. Home prices are up 19.2% over the last year, according to the S&P/Case-Shiller US National Home Price Index.

Desmond Lachman, a senior fellow at the American Enterprise Institute and a former deputy director for the International Monetary Fund, recently told Insider that rising interest rates are going to be a major drag on home prices, even if demand continues to outpace supply in the market . This is because higher mortgage rates directly affect a borrower’s buying power by reducing the total home price that buyers can realistically afford.

“Interest rates are pretty critical,” Lachman said in February. “You might have underlying factors in housing like population and household formation — the fundamentals might look good on that side — but if you’re going to have quite a big rise in interest rates and quite a deep

your house prices are going to come off.”

Ivy Zelman, the founder of research firm Zelman & Associates and a former analyst at Credit Suisse, also recently said on the BiggerPockets podcast that she expects a rush of inventory to hit the housing market due to overbuilding and supply chain issues eventually being resolved.

Others, however, are still bullish on the market. David Greene, the host of the BiggerPockets podcast and the owner of a mortgage company, told Insider in early March that the housing market’s biggest price gains are still yet to come.

“Prices are going to continue to grow. I think they’re gonna grow faster than we can get a handle on them,” Greene said. “I think this spring is going to be one of the busiest and hardest home buying seasons that we’ve seen in my lifetime.”

He said this is because the demand he’s seeing for mortgages at his firm continues to far outpace the supply on the market, and that this great of demand is strong enough to overcome rising interest rates. He also said he thinks drastic changes in supply would happen slowly over years, and would be easy to spot.

Changes are indeed starting to unfold in the real estate market. Demand is falling and inventory is rising. But how deep and lasting these trends will be remains to be seen. With the Fed signaling their unwillingness to back off from rate hikes with inflation at generational highs, the outlook for continued price growth isn’t as rosy as it was even six months ago.