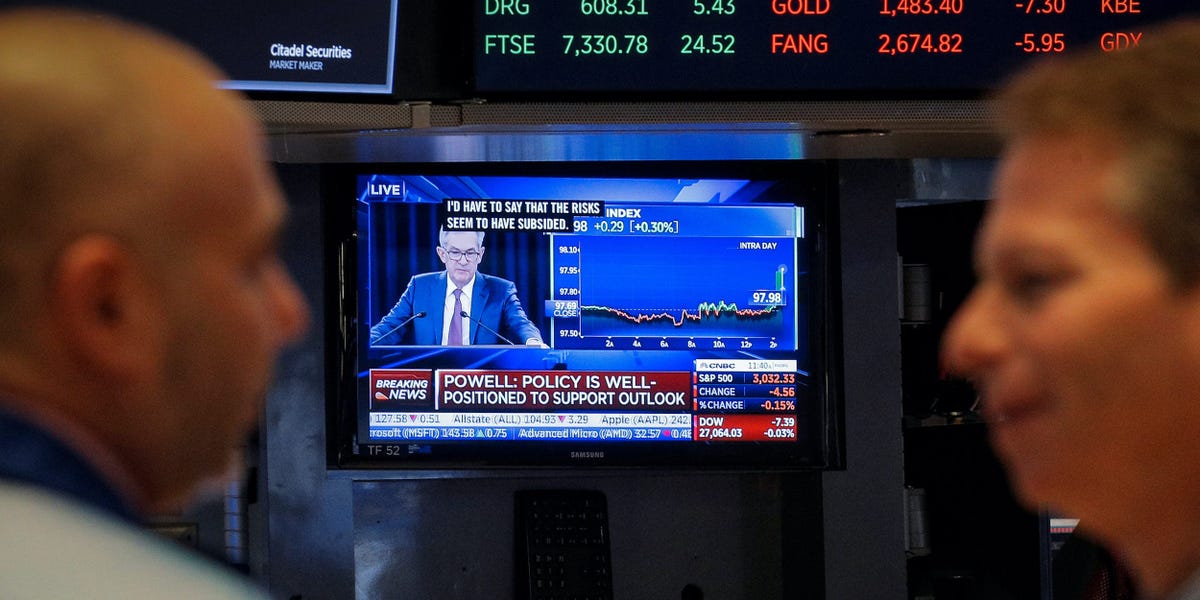 In November, Randy Kroszner, a former

governor, said the central bank was going through “one of the most challenging periods” in decades, as inflation hit levels not seen in a generation while the US economy surged back from one of its worst recessions.

In the four months since then, things have mostly gotten worse. The Consumer Price Index has since risen to a 7.9% annual rate as of February, the highest since 1982. And a war has broken out in Ukraine, sending ripples throughout the global economy as sanctions on Russia have helped to create a squeeze on energy and food prices.

The good news is that many fundamental indicators of economic health in the US are strong: Consumer demand remains high, and the unemployment rate is back near pre-pandemic lows at 3.8%. But as the pace of rising prices shows little sign of cooling in the months ahead due to the war — and as the Federal Reserve gets ready to tighten policy to fight this inflation — economic growth looks set to take a hit.

The Fed’s Federal Open Market Committee, which sets interest-rate policy, is expected to hike the federal funds rate by 25 basis points, or a quarter of a percentage point, at its meeting this week. Investors are anticipating it will be the first of several hikes this year. They also expect the Fed to start reducing its balance sheet.

Given how important fighting inflation has become for the Fed, the increasing fragility in the economy, and the weak growth outlook, experts are warning that stocks could continue to struggle. That’s a tough pill for investors to swallow, with the S&P 500 already down 13% in 2022 and the Nasdaq Composite down about 21%.

Morgan Stanley’s chief US equity strategist said in recent notes to clients that weak economic growth due to Fed tightening and impressive 2021 numbers to compare to should be a continued drag on stock performance in the near term.

Goldman Sachs’ David Kostin also lowered his S&P 500 2022 price target to 4,700 from 4,900 on Monday, due to a weakening growth outlook stemming from the war in Ukraine and Fed tightening. The index closed Monday afternoon at 4,173.

Stifel’s Barry Bannister said Tuesday that stocks would likely have a short rally by May before weakening again between then and October thanks to weak growth.

Top strategists and researchers at BlackRock also said in a note on Monday that they see slowing growth ahead due to the war. The authors of the note — led by Alex Brazier, the deputy head of the BlackRock Investment Institute — also said they see inflation remaining elevated because of the conflict, meaning a stagflationary environment could be ahead.

But the growth slowdown is something the Fed is prepared to live with, many say, and investors therefore will have to stomach it.

“Central banks are unlikely to come to the rescue to halt a growth slowdown by cutting rates,” the BlackRock team said. “In addition, the risk of inflation expectations becoming unanchored has increased as inflation becomes more persistent.

Danielle DiMartino Booth, a former advisor to Richard Fisher, then the president of the Federal Reserve Bank of Dallas, is also warning that, because of inflation, the central bank is going on a tightening spree regardless of what happens to stocks and despite geopolitical uncertainty .

“I wish that I could say that the Ukraine situation could make the Fed step back to a greater extent,” Booth told Insider on Monday.

Booth said she believes the Fed’s top focus is shrinking its balance sheet, or the assets it buys, and that the central bank would continue to pull money out of the financial system “until something breaks,” and “as long as you don’t have a wholesale seizing up in the credit markets, where you’re seeing companies unable to refinance and going out of business as a result — things of that nature.”

Stocks, meanwhile, will be “sacrificed” for the sake of fighting inflation, she said.

and that she sees a stagflationary environment ahead.

Tom Graff, the head of fixed income at Brown Advisory, also said on Monday that he doesn’t see the Fed backing off its hawkish stance except in a recession.

“The Fed probably can’t come to the rescue. Inflation is such a large problem that the Fed is probably intent on tightening policy almost no matter what,” Graff wrote in an email. “That doesn’t mean they won’t support market

should credit markets freeze up. But unless something like that happens, the Fed is probably going to remain on a tightening path.”

He continued: “I think it is fair to say that the Fed isn’t going to ride to the rescue of risk markets until there is a much more palatable threat of a recession.”

Bank of America’s Savita Subramanian, who was one of the first strategists on Wall Street to predict seven rate hikes in 2022, also believes the Fed will stick to its approach.

“I think the Fed Put is gone. I don’t think that the Fed has got the backs of the market,” Subramanian said during a February 23 live webinar hosted by Insider. “I mean, the S&P 500 is not one of their dual mandates.”

But Bank of America’s survey of fund managers found that investors believe the Fed would become more dovish if the S&P 500 falls to 3,700.

Still, some think of the uncertainty around the ongoing war in Ukraine will be a significant input for the Fed and will act to assume its aggressive response.

Ryan Detrick, the chief market strategist at LPL Financial, said that even though he thinks the central bank will move toward pre-pandemic policy, it will remain particularly nimble as events develop.

“We expect the Fed will kick off a series of interest-rate hikes this week with a 25-basis-point increase in the fed funds rate,” Detrick said. “But the path of policy normalization will be data dependent and much more measured than the pace of inflation would suggest.”