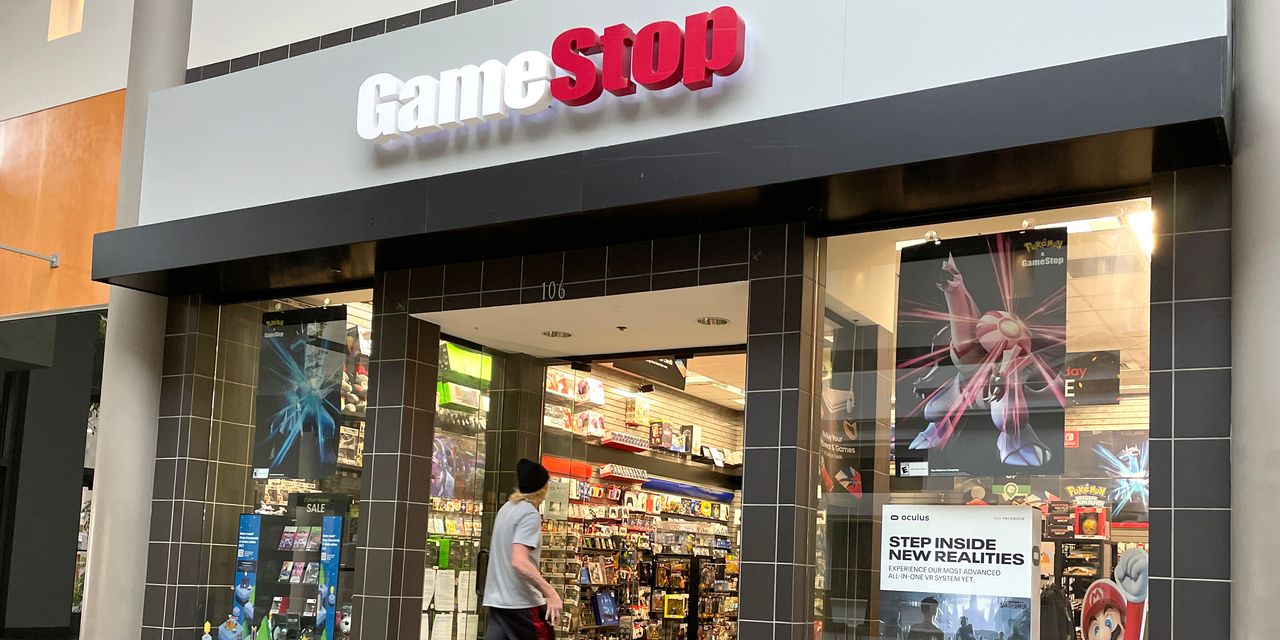 reported a wider-than-expected net loss for the first quarter and once again declined to provide an outlook. Its stock has fallen, gained and settled in close to unchanged in after-hours changing.

(ticker: GME) stock initially fell 2.8% following the release, before rising 3.5% at 4:29 pm, a fairly typical response to earnings reports that have included wild swings. The stock was up 0.5% shortly after the company’s earnings call.

The 5 pm ET earnings call lasted less than 10 minutes. The call’s operator said a brief question and answer session would follow CEO Matt Furlong’s remarks, but he corrected that statement since no such session was planned. The company hasn’t taken questions from analysts since its shares exploded in January 2021.

During his remarks, CEO Matt Furlong touted efforts to invest in blockchain efforts. The company launched a wallet for cryptocurrencies and nonfungible tokens in May, which it says allows users to store, send, receive, and use crypto and NFTs without leaving their web browsers. The wallet will be used in GameStop’s NFT marketplace, which plans to launch in the current quarter.

“We firmly believe that digital assets are core to the future of gaming,” Furlong said.

Experts are skeptical that GameStop’s NFT marketplace can gain traction and have a material impact on the firm’s fortunes. The recent cryptocurrency selloff likely hasn’t helped.

“Our growth and the launch of new tech products, such as our digital asset wallet and the upcoming NFT marketplace, demonstrate that we are in fact starting to transform,” Furlong said.

Wednesday’s report could spark renewed interest in the meme stock, as recent earnings reports have preceded volatile trading for GameStop shares. Such moves came despite uneventful earnings reports and some brief quarterly conference calls with no questions from analysts.

Wedbush analyst Michael Pachter told Barron’s ahead of the report that he expected another brief conference call featuring prepared remarks from Furlong.

“Maybe a mention of NFT, Metaverse and crypto wallet; no details on their strategy to actually make money; no explanation of how their deep relationships with console gamers gives them a competitive advantage with blockchain assets (NFTs) offered only in PC games; more promotion of their customer obsession; no progress in turning the retail business around,” Pachter added.

Pachter, who is among the three analysts still providing FactSet with earnings estimates, which was pretty much spot on with his predictions.

co-founder Ryan Cohen joined the firm as a member of the board of directors in January 2021, shares have traded wildly based on a mix of factors like retail trader enthusiasm, short-seller interest, and aggressive options bets. Since Cohen became the board’s chairman last June, the firm has sought to turn around its fortunes by expanding offerings, improving its logistics efforts, and investing in customer care. The company has also added a spate of new hires with e-commerce and technology firm expertise, most notably Furlong who previously oversaw Amazon.com’s (AMZN) Australia business.

None of that may matter for the stock in the near term. S3 Partners Director Matthew Unterman told Barron’s that the short-selling analytics firm estimates 14.92 million shares were recently sold short, accounting for 23.5% of shares available for trading. A short position is a bet that a stock will fall, whereby an investor borrows and then sells shares. Short interest is up 77% year to date, according to Unterman. Such a high short interest—a typical

firm has a short interest in the low single digits—makes for a crowded trade and leaves room for a potential short squeeze.

The company is also asking shareholders to increase authorized shares to one billion from 300 million at its annual meeting on Thursday. The firm says the increased breathing room would allow it to implement a stock split and provide more flexibility for future corporate needs.