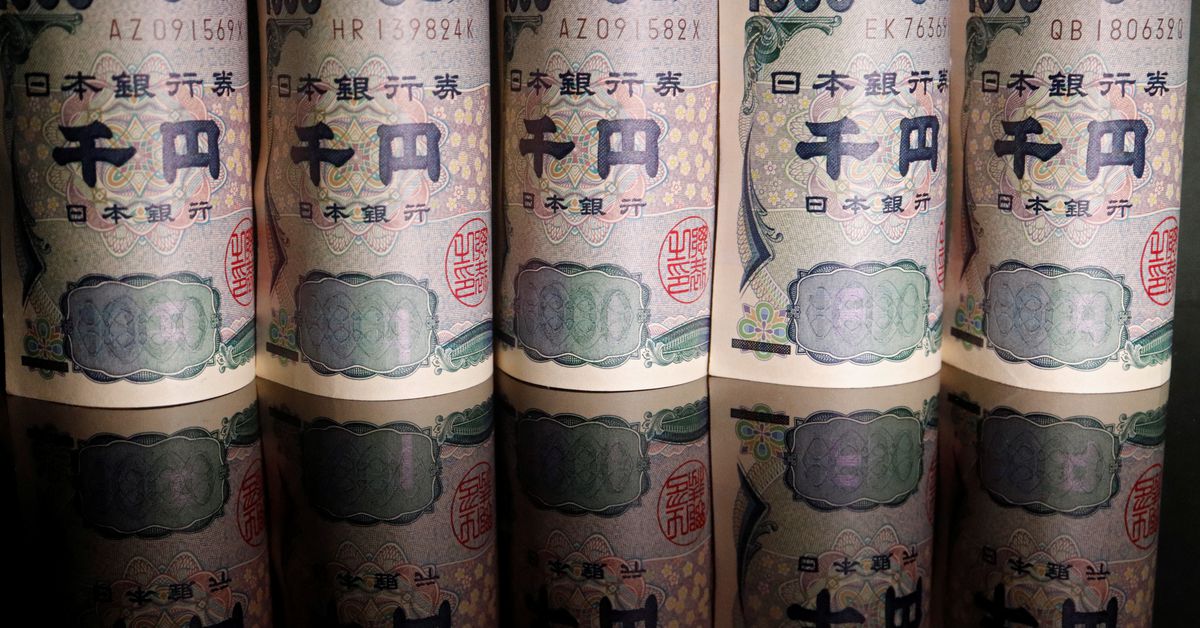 TOKYO, Oct 7 (Reuters) – Japan’s foreign reserves fell by a record $54 billion in September, official data showed on Friday, as global market ructions dented the value of foreign bonds and prompted dollar-selling intervention to arrest a steep decline in the yen .

The reserves stood at $1,238 trillion at the end of September, the lowest amount since the end of March 2017, according to the Ministry of Finance data.

The data on Japan’s foreign reserves, the world’s second largest in size after China, came a week after separate MOF figures showed Tokyo spent up to a record 2.8 trillion yen ($19.32 billion) intervening in the market last month.

Markets have been speculating that Tokyo had sold US Treasuries in conducting the dollar-selling intervention after the yen’s precipitous drop to 24-year lows against the greenback. Friday’s MOF data appeared to back that assumption, as it showed a record drop in the value of securities, which includes US Treasuries, held in reserves.

However, Finance Minister Shunichi Suzuki declined to confirm if US bonds were sold as part of its dollar-selling intervention.

“Factors behind the declines included drops in market value of securities due to big rises in bond yields, falls in the dollar value of euro-denominated assets on euro’s depreciation against the dollar and selling of foreign currencies in intervention,” Suzuki told reporters.

“I cannot comment on transactions related to intervention. We will manage reserves by paying heed to safety and liquidity.”

Through much of this year, particularly over the past few months, the US dollar has catapulted to record heights against many of its rival currencies on the back of the Federal Reserve’s aggressive policy tightening, causing a shakeout in financial markets. Surging global inflation, which is behind the Fed’s action, has dented the value of bonds worldwide.

Data released this week showed foreign reserves in other Asian economies falling with South Korea posting its second-biggest monthly decline on record as authorities stepped in to counter the won’s slump to a 13-1/2-year low. China and Indonesia also saw their reserves decline in September.

The MOF does not reveal the makeup of currencies in the reserves, a bulk of which is believed to be in the US dollar from the past practice of dollar-buying, yen-selling intervention to prevent a strong yen from damaging exporters.

Yen-buying, dollar-selling intervention has been rare in Japan which has long counted on exports of cars and electronics as a key driver of economic growth.

Now, policymakers are concerned more about the impact of sharp and one-sided yen weakening on a nascent economic recovery from the COVID-19 pandemic as it drives up living costs while making it harder for business planning.

The previous record amount for a single day intervention was 2.6 trillion yen spent in April 1998 during the 1997/98 Asian financial crisis.

Investors are closely watching daily intervention data for the July-September period due out in November to see whether authorities conducted ‘stealth intervention,’ or intervening without official announcement.

Japan had not conducted dollar-selling, yen-buying intervention since 1998, until the authorities forayed into the market on September 22 when the Japanese currency dropped sharply to a 24-year low near 146 yen to the dollar.