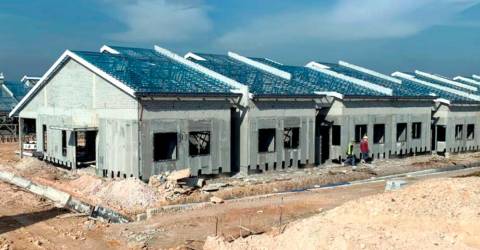 PETALING JAYA: Malaysians are hardpressed to purchase a house today as prices, particularly those of affordable homes, have outpaced incomes. It will take an average of 44 years to repay a housing mortgage of RM400,000.

This is based on the assumption that the mortgage installation is RM750 per month inclusive of interest and the person earns at least RM4,750 by age 35.

Emir Research social, law and human rights head Jason Loh said based on Bank Negara’s Financial Stability Review for the second half of 2021 and confirmed by House Buyers Association honorary secretary-general Datuk Chang Kim Loong, the “rule of thumb” is that mortgage installations should not exceed one third or 30% of gross income.

Bank Negara also pointed out that only 35.6% of newly launched housing units since 2015 are priced below RM300,000, whereas 76% of households earn less than the minimum RM8,333 a month to afford houses above this price.

“According to the real estate industry, based on experience, property prices in the Klang Valley double every 10 years. That accounts for a 400% increase over 20 years.

“But salaries have not kept up. In 2000, the starting salary for graduates was around RM1,500. Today, the average entry wage is around RM2,500 (RM2,100 according to JobStreet or RM2,412 according to Job Majestic) based on the job market listings.

“This represents a salary increase of less than 100%,” he said.

He said calculations also showed that the compound annual growth rate for incomes and house prices from 2014 to 2020 has increased by 2.1% and 4.1%, respectively.

“This means that house prices, including affordable houses, have outpaced income by a factor of two to one and that’s for an annualized average increment only.

“In short, wages have ‘stagnated’ over the years while house prices have surged forward, which can only reflect a gross mismatch between purchasing power and market prices,” Loh explained.

He said should Bank Negara decide to loosen the financing conditions that loan seekers only spend 30% of their gross income to service the loan by linking rental payments with credit assessments for qualifying mortgages, then we could be looking at spending 40 to 50 years to settle the loan.

“Intergenerational loans, where parents take the original mortgage to help their children buy a property, could become the norm.

“This could be part of the government’s approach to addressing the problem of house ownership (other than rent-to-own). “Intergenerational loans could also see the mortgage extended from 30 to 40 years to even 60 to 90 years,” he said.

Given that the retirement age is likely to be raised in the future due to longer life expectancy and inadequate retirement savings, Sunway University Business School economics professor Dr Yeah Kim Leng said the maximum mortgage period will increase accordingly.

He said if the borrower’s wage and income rises at a faster rate, he would have the option to pay off the mortgage earlier.

“The ability to repay the mortgage earlier will also depend on the debt service-to-income ratio. If it is lower than the permissible 30% or less of net income, then the borrower can increase monthly repayments in line with the income growth rate, to lower the tenure,” he said.

“However, this decline may not persist given the spike in global inflation since the outbreak of the Russian-Ukraine war and continuing pandemic-related supply chain disruptions,” he said.