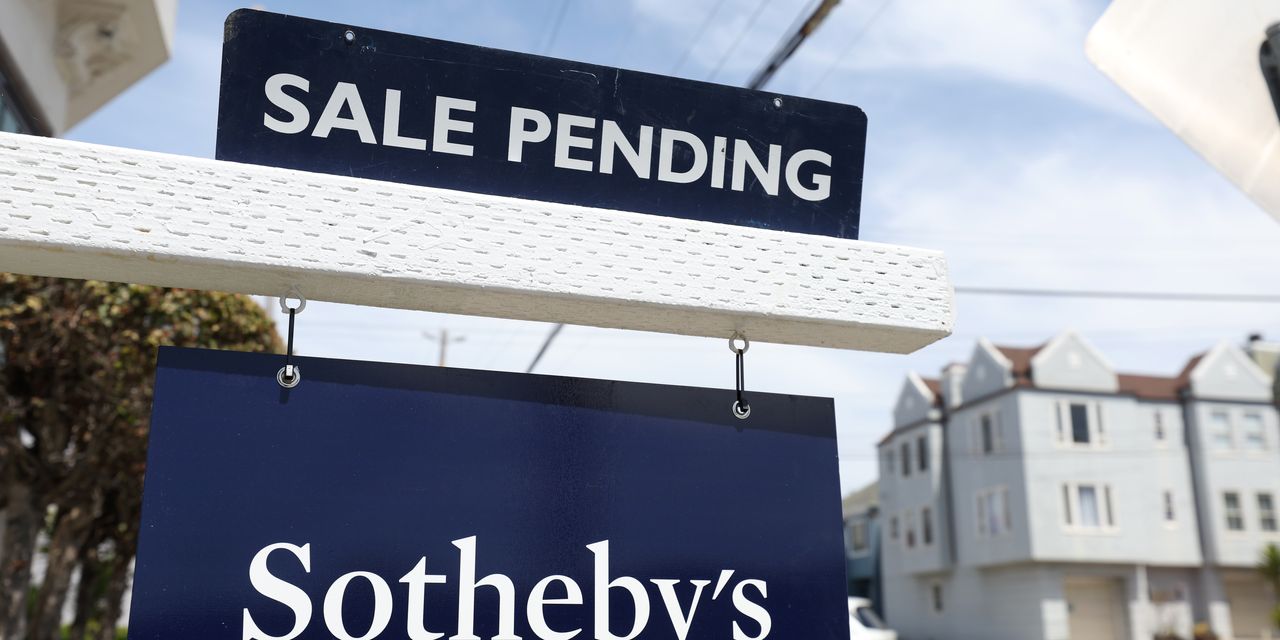 
Mortgage rates have hit 6% after a sharp selloff in the mortgage securities market, a development that could further slow the housing market.

Rocket Mortgage is showing on its website a 6.25% interest rate for 30-year fixed-rate mortgages for the purchase of new homes. Mortgage rates have doubled since the start of the year, stretching housing affordability, particularly for first-time home buyers. Mortgage rates will vary somewhat based on the credit standing of the home buyer.

“Along with MBS (mortgage-backed securities) yields, the 30-year fixed mortgage rate surged 60bps [basis points] in the past two days, as investors wrestled with the implications of Friday’s CPI report,” wrote Stephen Kim, the homebuilding analyst at Evercore/ISI, in a client note Tuesday. Sixty basis points is 0.6 of a percentage point.

Barron’s wrote Monday that the cooling of the housing market should offer some relief for home buyers who have faced sharp price increases and bidding wars during the past year.

Homebuilding stocks declined during Monday’s sharp stock-market drop, and many now trade at or below book value. That could signal that the stocks are near a bottom, since book value likely is a conservative liquidation value for companies that remain highly profitable.

The weekly survey by

“This abrupt, disruptive move higher in mortgage rates could temporarily drive demand below even the depressed level of supply that exists in many markets, as home buyers acclimate to this new level of borrowing costs,” Kim wrote.

The mortgage-securities market was hit hard Monday in sympathy with the selloff in Treasury securities.

Reflecting the losses in the mortgage-securities market, the $20 billion

Homebuilding stocks are languishing despite high current profitability as investors fear a slowdown in the coming months due to affordability issues and a potential weakening in the economy.

(TOL), the country’s largest luxury homebuilder, is up 0.8% Tuesday to $44.53, after dropping 6% Monday. It now trades below its book value of $46 a share at the end of its quarter that ended in April. Toll stock is down 38% so far this year.

(LEN), the No. 2 home builders behind

Kim, who has been among the more bullish housing analysts, wrote Tuesday: “We continue to believe a lack of housing inventory and rising rents will support home prices even in the midst of a buyers strike, while falling lumber can largely offset the margin impact of a return of builder incentives. Meanwhile, the small-cap homebuilding stocks are trading just 5% above 0.8x P/TBV (price to tangible book value)—a level which has consistently held except in the worst of recessions—and we expect book values ​​to rise more than 20 % over the next year.”

Homebuilders have rarely been in better shape financially and operationally. Debt levels are down and profits are at records. The companies have been returning significant amounts of stock to holders in share repurchases and higher dividends. Both Toll and Lennar yield about 2%.

An upbeat Kim wrote that when homebuilding stocks have hit such low valuations in the past, they typically have risen about 100% in the next 12 months. His view is that book value should help act as a floor underneath the stocks.