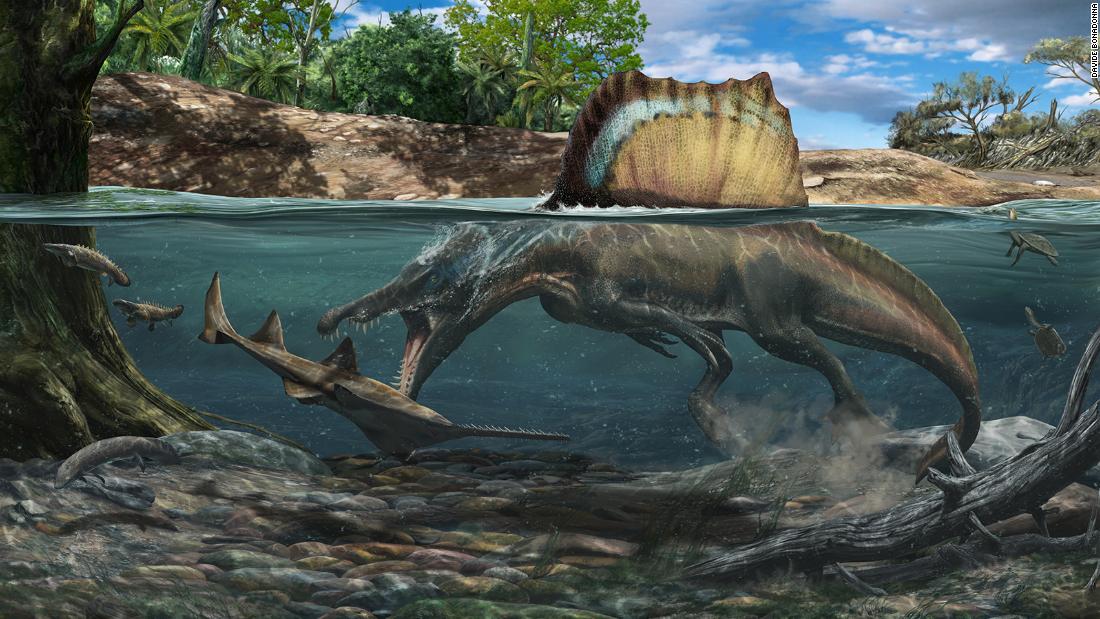 However, whether some dinosaurs were truly at ease in the water or just stood in the shallows and dipped their heads in to pursue prey as a heron would has divided paleontologists.

In an attempt to resolve this heated debate, a group of researchers has studied 380 bones belonging to 250 animals — some living and others extinct — including marine reptiles and flying reptiles, as well as mammals, lizards, crocodiles and birds.

“There are certain laws that are applicable to any organism on this planet. One of these laws regards density and the capability of submerging into water,” said Matteo Fabbri, a postdoctoral researcher at the Field Museum in Chicago, in a news release. He was the lead author of the study that published Wednesday in the journal Nature.

Bone density can be used as evidence for adaptation to life in water, the study said, as even aquatic animals that are not clearly shaped for an aquatic lifestyle — such as the hippopotamus — have very dense bones.

The researchers found that spinosaurids — a family of predatory dinosaurs that can be up to 15 meters (49 feet) in length (larger than a T. rex) — had dense bones, suggesting they were adapted to life in the water. None of the other 39 dinosaurs the research team investigated as part of the study were likely at ease in water, they said.

Within the spinosaurid family, they concluded that Spinosaurus, which has a distinctive sail-like feature on its spine, and its close relative Baryonyx had increased bone density and would have been able to swim and hunt while submerged underwater — a bit like a crocodile or hippo. Suchomimus, another related dinosaur, had lighter bones that would have made swimming more difficult. It likely lived by water and ate fish, as evidenced by its crocodile-like snout and conical teeth, but based on its bone density, it wasn’t actually swimming, the study found.

Thomas Holtz, a principal lecturer in vertebrate paleontology at the University of Maryland, said the study confirmed that the ancestors of Spinosaurus and Baryonyx spent enough time in water to evolve ballast, to provide stability, in the form of dense bones. However, he said his work on Spinosaurus showed it most likely struck at food from above — perhaps from shore, or while cruising lazily on the water’s surface — not from diving in the depths.

“The nostrils of Spinosaurus is not at all placed like it is submerged in animals like hippos and crocs, which spend much of their time; instead, it is placed back on the skull as it is in herons and other animals which feed by dipping their snout in the water to feed,” said Holz, who wasn’t involved in the study.

“The new evidence is consistent with it being able to submerge, at least sometime(s). But as we showed in a paper last year, it couldn’t have been a really fast swimmer with that large sail, at least not in shallow water.”

Jason Poole, an adjunct professor at Drexel University and the Bighorn Basin Paleontological Institute’s director of fossil preparation, said he would have liked to see more specimens related to Spinosaurus included in the study.

“Oddball dinosaurs tend to offer insight into the extremes of dinosaur evolution. The more specimens the better to understand how they got to be so odd,” said Poole, who wasn’t involved in the research.

“I think this study is a good one to keep the ball rolling but more work is always needed to get a better picture of the life of something so strange and far removed in time.”

The researchers, including scientists from the United States, Europe and Morocco, first compiled a database of sections of thigh bones and rib bones from a variety of animals to understand whether there was a universal correlation between bone density and behavior.

They cast a wide net. “We included seals, whales, elephants, mice, hummingbirds. We have dinosaurs of different sizes, extinct marine reptiles like mosasaurs and plesiosaurs. We have animals that weigh several tons, and animals that are just a few grams. The spread is very big ,” Fabbri said.

They found that animals that submerge themselves underwater to find food have bones that are almost completely solid throughout, whereas cross sections of land-dwellers’ bones look more like donuts, with hollow centers.

They did find that other dinosaurs, such as the towering plant-eating sauropods, also had dense leg bones, but other bones were lightweight. Fabbri said this was a pattern also seen in very heavy living land animals like elephants and rhinos.

The research is an example of a big data approach to paleontology that has yielded intriguing insights into how dinosaurs experienced their world — something that is often hard to ascertain from studying fossils of individual animals.

Such studies, according to Jingmai O’Connor, a curator at the Field Museum and co-author of the bone density study, that draw from hundreds of specimens, are “the future of paleontology.”

“They’re very time-consuming to do, but they let scientists shed light onto big patterns, rather than making qualitative observations based on one fossil.”

A study published last year examined and reconstructed the inner ears of ancient fossilized beasts and compared them with the ear canals of living animals. The researchers were able to deduce from that exercise whether the creatures would have been nocturnal hunters, attentive parents or clumsy fliers.

However, this kind of research does have limitations, since one individual feature cannot give a complete picture about the lifestyle of an animal, Holz said.

“Each piece of evidence adds to the total picture. In this particular case, they have provided a great new database of bone density in a wide variety of animals of different life habits. So in the future we can now compare other animals with lifestyles which are not well understood,” Holz said.