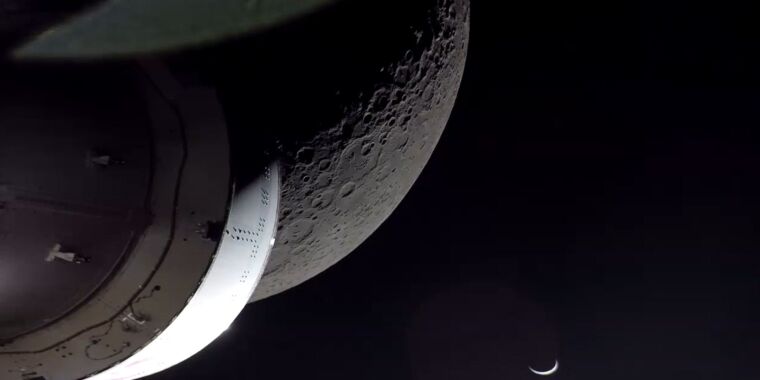 The Orion spacecraft swung by the Moon on Monday, flying to within 130 km of that world’s surface as it set course for a return to Earth this weekend.

In making this “powered flyby burn” to move away from the Moon, Orion’s service module performed its longest main engine firing to date, lasting 3 minutes and 27 seconds. After successfully completing the maneuver, NASA’s mission management team gave the “go” to send recovery teams out into the Pacific Ocean, where Orion is due to splashdown on Sunday, during the middle of the day.

By getting into an orbit around the Moon, and back out of it again during its deep space mission, Orion has now completed four main propulsive burns. This completes a big test of the spacecraft and its propulsive service module, which was built by the European Space Agency. Although a boilerplate version of Orion made a flight in 2014, it did so without a service module.

As part of this Artemis I mission, NASA is now three weeks into a 25.5-day test flight of the Orion spacecraft. The goal is to validate the spacecraft’s capabilities ahead of a human flight of the vehicle in about two years’ time, the Artemis II mission.

Orion has met most of its main objectives to date, with only the entry, descent, and splashdown part of its mission ahead of it. The spacecraft’s heat shield must demonstrate its ability to survive reentry at a velocity of 39,400 kph. This great test will come Sunday during a fiery reentry into Earth’s atmosphere.

So far, Orion’s test flight has gone remarkably well. Typically, with new spacecraft, there are issues with thrusters, navigation, onboard avionics, and more. However, Orion has had no major issues. The only real troubleshooting has involved a problem with power systems on the vehicle.

The issue has occurred with four “latching current limiters” that help route power to propulsion and heating systems on Orion. For some reason, automated controllers on Orion commanded the four current limiters to “open” when no such command was supposed to be sent. “We’re not exactly sure on the root cause of the problem, but teams are doing tests on the ground,” said Debbie Korth, the Orion Program deputy manager, during a briefing on Monday evening at Johnson Space Center in Houston.

This system is somewhat like a circuit breaker box in a home, and for some reason four of the breakers were opened when they were not supposed to be. This did not pose a threat to Orion, as there are backup power systems. Had a crew been on board it would have required a minor procedure to account for the problem.

In an interview after the news briefing, Korth said she didn’t think the glitch would impact the service module that will be used for the Artemis II mission. This hardware is already built and being tested in the United States.

“I think it’s probably too early to say for sure, but ideally we will not want to perturb the Artemis II service module,” she said. “This may very well be something we can handle with software.”