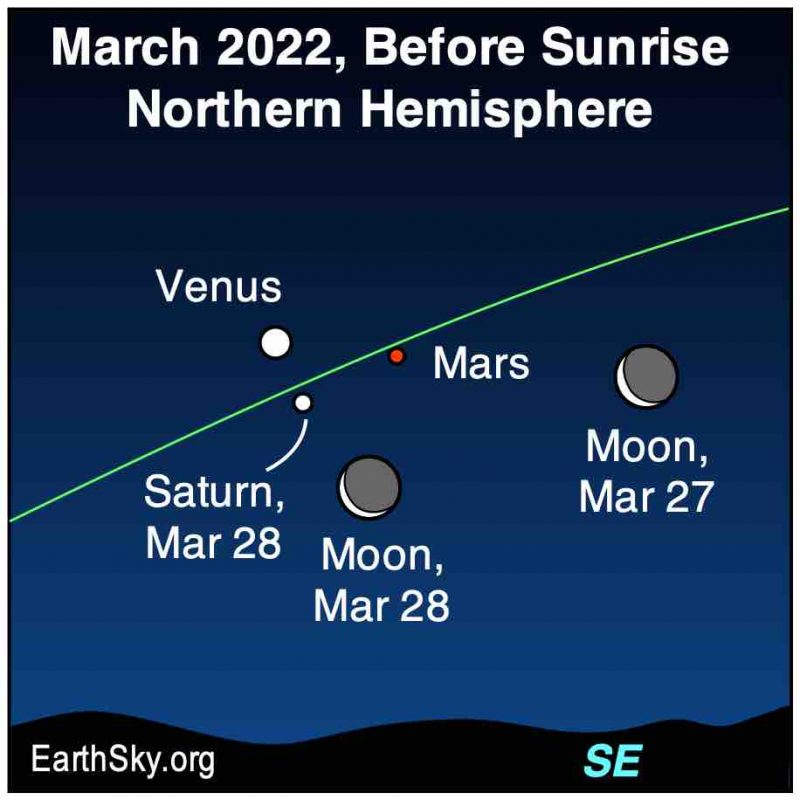 In the early morning skies on March 27 and 28, 2022, you can catch a waning crescent moon passing a trio of planets. The planets are close together in a series of conjunctions. Venus is the brightest planet, with two fainter planets near it, Saturn below and Mars to the west.

On Sunday morning, March 27, the moon will be approaching Mars on the sky’s dome. The moon that morning will be about the 25% illuminated, heading toward new moon on April 1.

But the view on March 28 is the real stunner. Then the moon, brilliant Venus, and fainter Mars and Saturn all bunch together within an 8-degree circle on the sky’s dome. Because it’s a waning moon, its phase will be even thinner than the morning before, only around 16% illuminated. The quartet makes for a beautiful photo op. And you get a great pic, submit it to us!

Note to telescope users: A faint comet, 22P/Headf, is also near the planets on March 27 and 28. But, at 11th magnitude, and with dawn rising, you’ll need your telescope to catch it, plus dark skies, and experience with seeing faint objects.

The planets are in conjunction with the waning moon these March mornings. Plus Venus and Saturn have a conjunction on March 29. At all of these conjunctions, at the times given below, the two objects have the same right ascension (like celestial longitude on an imaginary grid of sky surrounding Earth). Here are the details:

The view from the Southern Hemisphere

The view is even better from the Southern Hemisphere, as the path of the ecliptic cuts at a steeper angle across the horizon. Not only will you see Venus, Mars and Saturn by the moon, you may even spot Jupiter before sunrise.

Bottom line: See the morning planets – Venus, Mars and Saturn – in conjunction, plus the moon which joins the view on March 27 and 28, 2022. In the Southern Hemisphere, you might see Jupiter as well.

Kelly Kizer Whitt has been a science writer specializing in astronomy for more than two decades. She began her career at Astronomy Magazine, and she has made regular contributions to AstronomyToday and the Sierra Club, among other outlets. Her children’s picture book, Solar System Forecast, was published in 2012. She has also written a young adult dystopian novel titled A Different Sky. When she is not reading or writing about astronomy and staring up at the stars, she enjoys traveling to the national parks, creating crossword puzzles, running, tennis, and paddleboarding. Kelly lives with her family in Wisconsin.