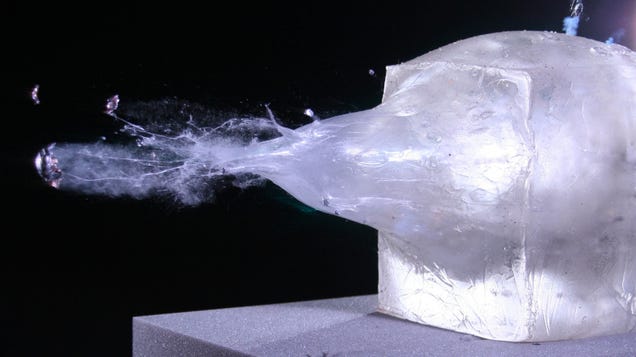 A team of researchers from the University of Kent in Canterbury, England, have used a protein called talin, which functions as “the cell’s natural shock absorber,” to create a new shock-absorbing material capable of stopping projectiles traveling at supersonic speeds without destroying them in the process.

Developing materials to improve the efficacy of armor isn’t a pursuit exclusive to the militaries of the world. Shock-absorbing materials have benefits in other fields, too. In the aerospace industry, they’ll be essential as we continue to expand our presence in space, where even tiny particles moving at supersonic speeds can cause significant damage to spacecraft. Even other researchers can benefit from breakthroughs in this field, particularly those conducting experiments with high-speed projectiles that eventually need to be safely stopped.

The current design of projectile-stopping armor and materials uses a mix of ceramics and fiber-based components layered together, which are effective at stopping a high-speed object from passing straight through them, but end up transferring a lot of the projectile’s kinetic energy onto the armored vehicle or person, often resulting in non-fatal injuries. These materials also tend to get destroyed in the process, requiring them to be replaced after every use. This new research brings us one step closer to solving the unique challenges of developing shock-absorbing materials.

At the molecular level, talin has a structure that unfolds under tension to dissipate energy and then fold back up again afterwards, leaving it ready to absorb shocks again and again, keeping cells resilient against outside forces. When the protein was combined with other ingredients and polymerized into a TSAM (or Talin Shock Absorbing Material), those unique shock-absorbing properties were maintained.

To test the effectiveness of TSAMs, the researchers subjected them to impacts from basalt particles (around 60 µM in size, or roughly the diameter of a human hair) and later, larger aluminum shrapnel, traveling at 1.5 kilometers/second. That’s over 3,300 miles per hour, and three times faster than the speed of a nine-millimeter bullet fired from a hand gun. Not only was the impact of the particles completely absorbed by the TSAM material, but the particles themselves weren’t destroyed in the process.

The size of these test materials means the particles weren’t imparting as much energy into the TSAMs as a projectile fired from something like a tank would, but it does help demonstrate their potential. Eventually, the researchers are confident the hydrogel could be incorporated into lighter wearable armor for soldiers that do a better job of absorbing the energy of an impact, while retaining their shock-absorbing capabilities, even after saving a life.

It would potentially be even more useful for the aerospace industry, both for protecting spacecraft and for research involving space debris, dust, and micrometeoroids, which could be captured without being destroyed in the process. Of course, the captured micrometeroids would be easier to study than a handful of decimated dust. But far more important to regular readers of Gizmodo is how this new material can be incorporated into smartphone cases, making our expensive investments as durable and resilient as the nearly indestructible Nokia handsets from years ago.