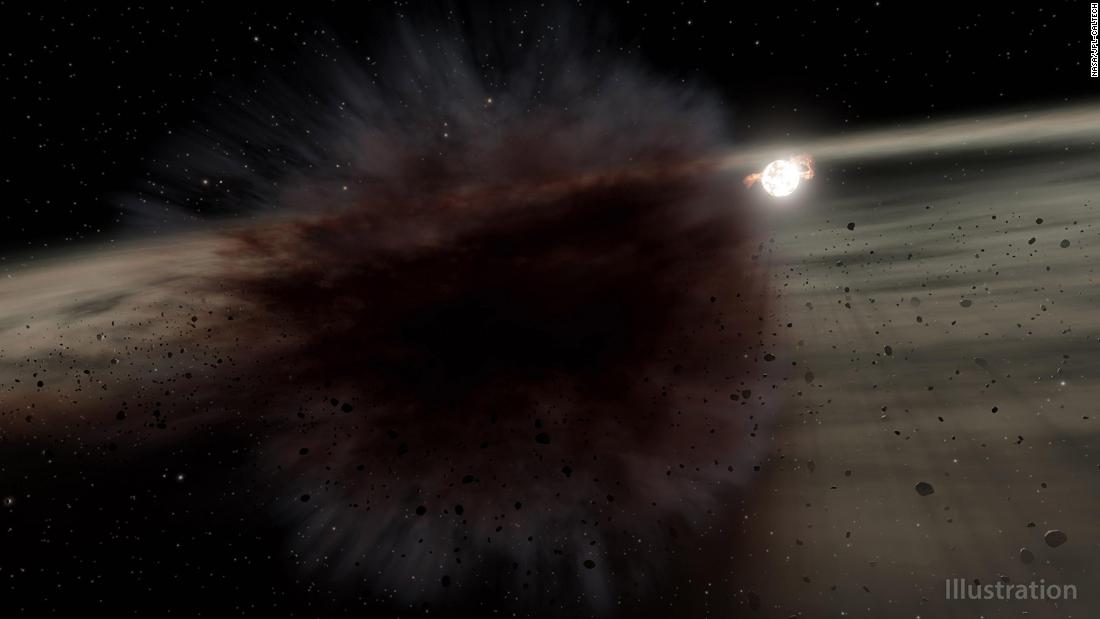 Astronomers had the chance to observe a massive, star-size debris cloud from such an impact as it passed in front of a nearby star and blocked some of its light. This temporary dimming of starlight, known as a transit, is often a method used to detect the presence of exoplanets around stars beyond our solar system. But this time, the observations revealed evidence of a collision between two celestial bodies likely the size of giant asteroids or mini planets, the scientists said.

A team of astronomers began to routinely observe HD 166191, a 10-million-year-old star similar to our sun located 388 light-years away, in 2015. Astronomically speaking, it’s still a fairly young star — considering that our sun is 4.6 billion years old. At this age, planetesimals often form around stars. These orbiting clumps of dust left over from the formation of the star become rocky bodies, not unlike the asteroids that are left over from the formation of our solar system. Planetesimals found around other stars can collect material and increase in size, eventually turning into planets .

Gas, which is necessary for star formation, disperses over time between the planetesimals — and then these objects are increasingly at risk of smashing into each other.

The research team had considered that they would likely be able to witness such an event if they continued observing HD 166191. Using the Spitzer Space Telescope, the astronomers made more than 100 observations of the star between 2015 and 2019. (Spitzer was retired at the beginning of 2020. )

Planetesimals are too small to be seen by telescopes, but when they crash into each other, their dust clouds are large enough to be observable.

Based on the observable data, the researchers initially believe the debris cloud became so elongated that it took up an area about three times that of the star — and that’s the minimum estimate. But Spitzer’s infrared observation only saw a small portion of the cloud pass in front of the star while the total debris cloud spanned a region hundreds of times the size of the star.

In order to create such a massive cloud, the collision was likely the result of two objects similar in size to Vesta, a 330-mile-wide (530-kilometer-wide) giant asteroid nearly the size of a dwarf planet in the main asteroid belt found between Mars and Jupiter in our solar system, coming together.

When these two celestial bodies collided, they created enough heat and energy to vaporize some of the debris. Fragments from this collision likely crashed into other small objects orbiting HD 166191, contributing to the dust cloud witnessed by Spitzer.

“By looking at dusty debris disks around young stars, we can essentially look back in time and see the processes that may have shaped our own solar system,” said lead study author Kate Su, research professor at The University of Arizona’s Steward Observatory, in a statement. “Learning about the outcome of collisions in these systems, we may also get a better idea of ​​how frequently rocky planets form around other stars.”

In mid-2018, the HD 166191 grew in brightness, suggesting activity. Spitzer, which observed infrared light that is invisible to human eyes, detected a debris cloud as it moved in front of the star. This observation was compared with those taken in visible light by ground-based telescopes, which revealed the size and shape of the cloud as well as how quickly it evolved. The ground-based telescopes had also witnessed a similar event about 142 days prior, during a time when there was a gap in Spitzer’s observations.

“For the first time, we captured both the infrared glow of the dust and the haziness that dust introduces when the cloud passes in front of the star,” said study coauthor Everett Schlawin, assistant research professor at The University of Arizona’s Steward Observatory, in a statement.

Previous attempts by Spitzer to observe collisions around young stars didn’t reveal many details. The new observations were published last week in The Astrophysical Journal.

“There is no substitute for being an eyewitness to an event,” said study coauthor George Rieke, a Regents’ Professor of Astronomy and Planetary Sciences at The University of Arizona’s Steward Observatory, in a statement. “All the cases reported previously from Spitzer have been unresolved, with only theoretical hypotheses about what the actual event and debris cloud might have looked like.”

As the researchers continued observations, they watched the debris cloud expand and become more translucent as the dust quickly dispersed.

The cloud was no longer visible in 2019. There was, however, twice as much dust in the system compared with observations by Spitzer prior to the collision.

The research team continues to monitor the star using other infrared observatories and anticipate new observations of these kinds of collisions using the recently launched James Webb Space Telescope.