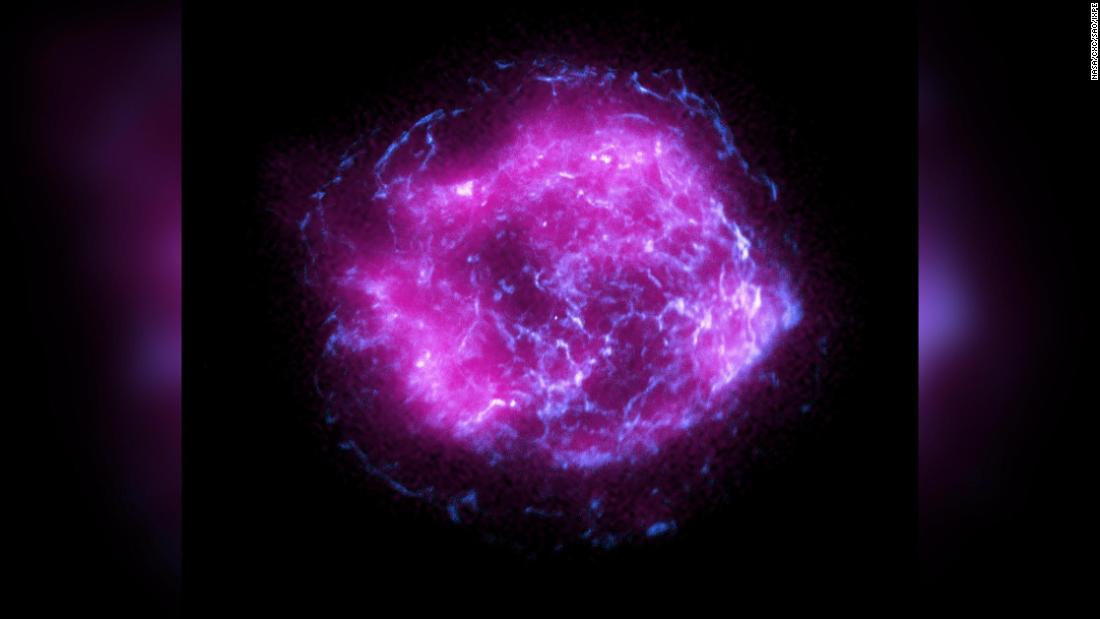 And they are stunning. The images offer a glimpse of Cassiopeia A, the famous remnant of a supernova, or exploding star.

Glowing purple gas clouds can be seen around the remains of the star. These clouds were created when shock waves from the explosion heated surrounding gas to incredibly high temperatures, accelerating high energy particles called cosmic rays.

“The IXPE image of Cassiopeia A is bellissima, and we look forward to analyzing the polarimetry data to learn even more about this supernova remnant,” said Paolo Soffitta, the Italian principal investigator for IXPE at the National Institute of Astrophysics in Rome, in a statements.

The spacecraft, a collaborative effort between NASA and the Italian Space Agency, carries three telescopes. Although Cassiopeia A has been observed previously using other telescopes, IXPE is designed to reveal new insights about some of the most extreme objects in the universe, such as supernovae, black holes and neutron stars.

The beautiful remnants of the Cassiopeia A supernova are located about 11,000 light-years away from Earth. It is now a giant bubble of hot, expanding gas, and it’s the youngest known remnant from a supernova explosion, dating back 340 years ago, in our Milky Way galaxy. The light from this supernova first reached Earth in the 1670s.

X-rays are highly energetic waves of light that are born from extremes. In space, these intense conditions include powerful magnetic fields, collisions between objects, explosions, scorching temperatures and rapid rotations.

This light is practically encoded with the signature of what created it, but Earth’s atmosphere prevents X-rays from reaching the ground. This is why scientists rely on X-ray telescopes in space.

What new data on Cassiopeia A may reveal

In the new image, X-ray data previously captured by NASA’s Chandra X-Ray Observatory can be seen in blue. Chandra launched in 1999 and set its sights on Cassiopeia A immediately, revealing the presence of either a black hole or neutron star at the center of the supernova remnant. Black holes and dense neutron stars are often created by the violent event of star death.

“The IXPE image of Cassiopeia A is as historic as the Chandra image of the same supernova remnant,” said Martin C. Weisskopf, IXPE principal investigator based at NASA’s Marshall Space Flight Center in Huntsville, Alabama, in a statement.

“It demonstrates IXPE’s potential to gain new, never-before-seen information about Cassiopeia A, which is under analysis right now.”

The new NASA mission orbits 370 miles (600 kilometers) above Earth’s equator and just wrapped up a month-long phase of commissioning and testing out its instruments. While IXPE isn’t as big as Chandra, it is the first space observatory of its kind. The satellite can see an often overlooked aspect of cosmic ray sources called polarization. Light becomes polarized when it passes through something that causes its particles to scatter.

The data IXPE has collected about Cassiopeia A can help scientists measure how polarization varies across the remnant, which is 10 light-years across.

Using IXPE to study the polarization of cosmic X-rays could help scientists better understand the remnants of exploded stars, like black holes and neutron stars, their environments and how they produce X-rays. This perspective on extreme cosmic objects could also reveal the answers to larger fundamental questions about physics.