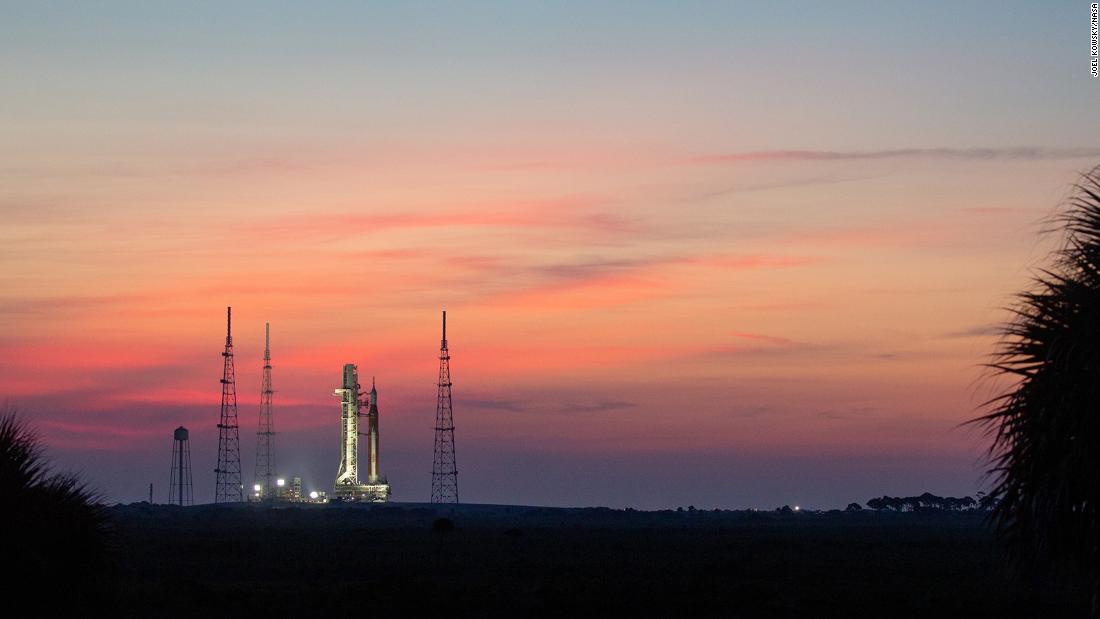 The uncrewed Artemis I mission, including the Space Launch System Rocket and Orion spacecraft, is targeting liftoff on August 29 between 8:33 am ET and 10:33 am ET from NASA’s Kennedy Space Center in Florida.

Although there is no human crew aboard the mission, it’s the first step of the Artemis program, which aims to return humans to the moon and eventually land them on Mars.

The Orion spacecraft will enter a distant retrograde orbit of the moon and travel 40,000 miles beyond it, going further than any spacecraft intended to carry humans. Crews will ride aboard Artemis II on a similar trajectory in 2024, and the first woman and the next man to land on the moon are slated to arrive at the lunar south pole in late 2025 on the Artemis III mission.

Appearances by celebrities like Jack Black, Chris Evans and Keke Palmer and performances of “The Star-Spangled Banner” by Josh Groban and Herbie Hancock and “America the Beautiful” by The Philadelphia Orchestra and cellist Yo-Yo Ma are also part of the program .

Once the launch has occurred, NASA will conduct a post-launch briefing, and later in the day, the agency will share the first Earth views from cameras aboard the Orion spacecraft.

Orion’s journey will last 42 days as it travels to the moon, loops around it and returns to Earth — traveling a total of 1.3 million miles (2.1 million kilometers). The capsule will splash down in the Pacific Ocean off the coast of San Diego on October 10.

Cameras inside and outside of Orion will share images and video throughout the mission, including live views from the Callisto experiment, which will capture a stream of a mannequin called Commander Moonikin Campos sitting in the commander’s seat. If you have an Amazon Alexa-enabled device, you can ask it about the mission’s location each day.

Here’s everything you can expect before, during and after the launch.

Counting down to launch

The official launch countdown will begin on August 27 at 10:23 am ET.

The call to stations will occur Saturday morning at Kennedy Space Center, as well as for teams offering support from various centers across the country. This is when all of the teams associated with the mission arrive at their consoles and report they’re ready, kicking off a two-day countdown.

Over the weekend, engineers will power up the Orion spacecraft, the interim cryogenic propulsion stage (the upper part of the rocket) and core stage, charge batteries and conduct a final preparation for the engines.

Late Sunday night into early Monday morning, the launch team will conduct a briefing to discuss weather conditions and decide if they are “go” or “no go” to begin fueling the rocket.

The launch director will poll the team to make sure that every station is “go” 15 minutes ahead of liftoff.

At 10 minutes and counting, things kick into high gear as the spacecraft and rocket go through the final steps. Much of the action takes place in the final minute, as the ground launch sequencer sends the command for the rocket flight computer’s automated launching sequencer to take over about 30 seconds prior to launch.

In the last few seconds, hydrogen will burn off, the four RS-25 engines will start, resulting in booster ignition and liftoff at T minus zero.

Journey to the moon

After liftoff, the solid rocket boosters will separate from the spacecraft about two minutes into the flight and splash down in the Atlantic Ocean, with other components also jettisoning shortly after. The core stage of the rocket will separate about eight minutes later and fall toward the Pacific Ocean, allowing for Orion’s solar array wings to deploy.

The perigree raise maneuver will occur about 12 minutes after launch, when the ICPS experiences a burn to raise Orion’s altitude so it doesn’t reenter the Earth’s atmosphere. Shortly after that is the trans-lunar Injection burn, when the ICPS boosts Orion’s speed from 17,500 miles per hour (28,163 kilometers per hour) to 22,600 miles per hour (36,371 kilometers per hour) to escape the pull of Earth’s gravity and set off for the moon

After this burn, the ICPS will separate from Orion.

Around 4:30 pm, Orion will make its first outbound trajectory correction burn using the European Service Module, which provides the spacecraft with power, propulsion and thermal control. This maneuver will put Orion on a path to the moon.

The next few days after launch, Orion will venture out to the moon, coming within 60 miles (96 kilometers) during its closest approach of the lunar surface on day six of the journey — or September 3 if the launch occurs as planned on August 29. The service module will place Orion in a distant retrograde orbit around the moon on day 10, or September 7.

Orion will make its second-closest approach of the lunar surface, coming within 500 miles (804 kilometers), on October 3. The service module will experience a burn that enables the moon’s gravity to slingshot Orion back on its way to Earth.

Just before reentering Earth’s atmosphere, the service module will separate from Orion. The spacecraft will hit the top of Earth’s atmosphere moving at about 25,000 miles per hour (40.233 kilometers per hour), and its heat shield will experience temperatures of nearly 5,000 degrees Fahrenheit (2,760 degrees Celsius).

Splashdown will stream live from NASA’s website, collecting views from the 17 cameras aboard the recovery ship and helicopters that will be waiting for Orion’s return.

The landing and recovery team will collect the Orion capsule, and the data collected by the spacecraft will determine what lessons have been learned before humans return to the moon.