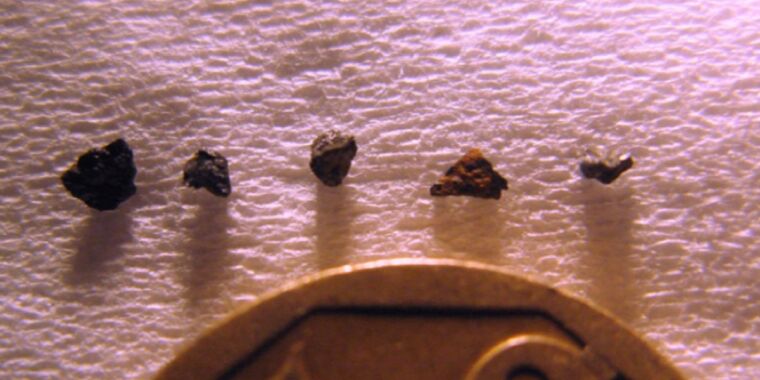 In 1996, an archaeologist named Aly A. Barakat was doing fieldwork in an Egyptian desert and stumbled across an unusual shiny black pebble now known as the Hypatia stone (after Hypatia of Alexandria). Studies conducted over the last several years indicate that the stone is of extraterrestrial origin. And according to a recent paper published in the journal Icarus, the stone’s parent body was likely born in the aftermath of a rare type Ia supernova explosion.

The Hypatia stone was found in an area of ​​southwest Egypt known for its Libyan Desert glass, produced by an extreme surface heating event, quite possibly a meteorite. The Hypatia stone may also have come from that impact, although more recent evidence suggests a comet would be a more likely parent body.

The University of Johannesburg’s Jan Kramers and several colleagues have investigated the Hypatia stone for many years. Kramers compared the Hypatia stone’s internal structure to a fruitcake: a poorly mixed dough forming the bulk of the pebble (mixed matrices), with the mineral grains lurking in the stone’s inclusions representing the cherries and nuts. He likened the secondary substances in the stone’s cracks to the flour dusting the gaps in a fruitcake.

In 2013 Kramers and colleagues published the results of a chemical analysis that provided strong evidence in favor of the stone being a comet fragment. This analysis was a striking suggestion since most comet fragments found on Earth are microscopic dust particles in the upper atmosphere or buried in Antarctic ice. The comet hypothesis would explain the presence of microscopic diamonds in the stone, likely formed in the impact when the comet exploded above Egypt some 28.5 million years ago. (The presence of those micro-diamonds is probably why the stone managed to make it to Earth without disintegrating)

However, work by other research teams in 2015 ruled out a comet or meteorite as the stone’s source, based on noble gas and nuclear probe analyses. The mineral matrix just doesn’t resemble the composition of known meteorites: for instance, it has a massive amount of carbon and a small amount of silicon. So if it didn’t come from Earth, and it’s not typical of a comet or meteorite fragment, where did it come from?

Kramers et al.’s 2018 micro-mineral analysis revealed that the matrix also has a high concentration of polyaromatic hydrocarbons (PAH)—a major component of interstellar dust—and those microscopic diamonds. The grains comprised of aluminum, silver iodine, phosphide, and silicon carbide, as well as a compound of nickel and phosphorus, with very little iron. The latter are elements that typically form the bulk of rocky planets. Based on this, Kramers and his colleagues suggested that the Hypatia stone contains matter that existed in space before our Solar System formed.