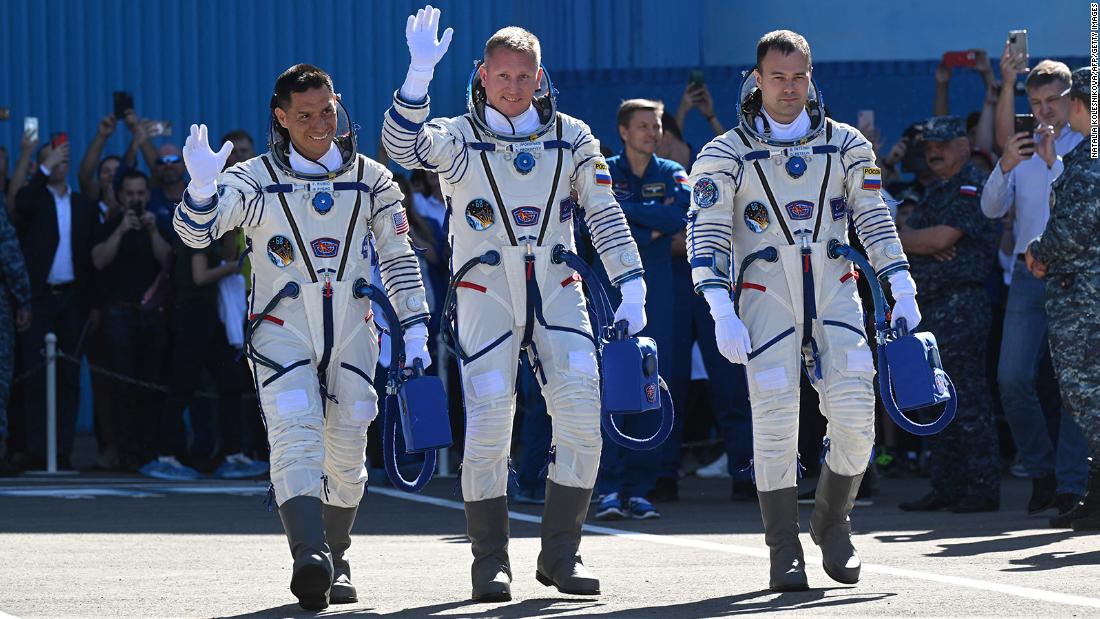 The spacecraft took off from the famed Baikonur Cosmodrome in Kazakhstan, carrying NASA astronaut Frank Rubio and two Russian cosmonauts — Dmitri Petelin and Sergey Prokopyev — on what is expected to be a six-month stay on the International Space Station. Liftoff occurred at 9:54 am ET.

This will be the first trip to space for Rubio, who will serve as a flight engineer on this mission. A trained family physician, he also has experience as a flight surgeon — meaning he’s got the chops to take care of any medical issues that could arise during their journey.

Rubio, a Florida native, joined NASA in 2017. Prior to his acceptance in the astronaut corps, he graduated from the US Military Academy and earned a Doctorate of Medicine from the Uniformed Services University of the Health Sciences. He has more than 600 hours of combat experience in countries including Bosnia, Afghanistan and Iraq. Rubio considers Miami his hometown, according to NASA, although he was born in California and his mother lives in El Salvador.

When Rubio and his Russian counterparts make it to the space station, they’ll be tag-teaming with astronauts from the United States, Russia and Europe. The space station, which has continuously had people on board since the year 2000, keeps a rotating base of crew members to ensure the orbiting laboratory is consistently staffed with enough astronauts to maintain the space station’s hardware as well keep a lengthy log of space-based experiments operating.

The fact that Rubio is traveling to space on a Russian Soyuz capsule is notable.

The history of getting humans to and from the International Space Station began with Russia and the United States each having their own rockets to get their citizens to and from the ISS, which became a symbol of post-Cold War cooperation in the late 20th century and early 2000s. But after 2011, when NASA retired its Space Shuttle program, Russia’s Soyuz capsules were the only option for US astronauts. NASA has been paying up to $90 million for seats aboard a Soyuz spacecraft.

In 2020, that changed. NASA had, years before, cooked up its own plan to allow privatized companies to take over the task of shuttling astronauts to and from the space station. And Elon Musk’s SpaceX has been doing that ever since, beginning with the Demo-2 mission in 2020 and, most recently, gearing up for the Crew-5 mission. SpaceX’s launches have become routine for NASA, allowing it to take back some control over how the ISS is staffed.
The tension between the United States and Russia, however, hit a fever pitch after Russia invaded Ukraine in February.

But after years of sharing rides on Russian Soyuz vehicles before SpaceX came onto the scene, one of the big questions that cropped up was whether the United States and Russia would continue to put their astronauts side-by-side on ISS missions.

That was answered in July when NASA and its Russian counterpart, Roscosmos, confirmed that sharing seats on rocket rides to the space station would continue. Russian cosmonauts are now expected to fly on SpaceX capsules in addition to NASA astronauts sharing seats on Russian Soyuz spacecraft.
The United States and Russia are the primary operators of the ISS, with both countries controlling its day-to-day operations. Importantly, the Russian-controlled segment houses the propulsion that is necessary to keep the ISS afloat in Earth’s orbit. And NASA has repeatedly said that one of its goals is to ensure continued cooperation between the US and Russia in space.

Rubio, as many US astronauts before him, traveled to Russia to train with Russian cosmonauts ahead of this mission.

“It’s been a privilege to be here,” he told CNN’s Kristen Fisher during an August press conference. “We have a pretty robust NASA team that’s here to support the mission…I think every one of us would say we do feel safe.”