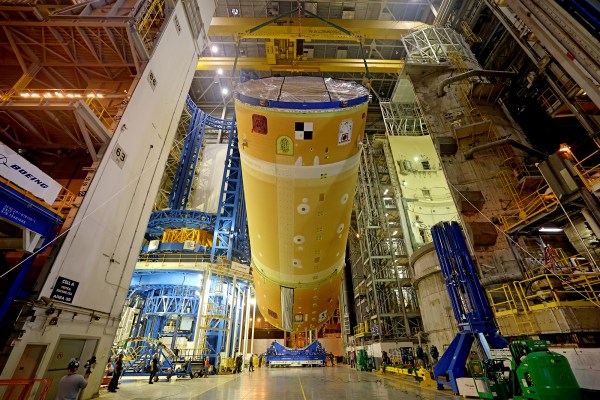 Twelve years after it was first announced, NASA’s massive Space Launch System will finally make its public debut. The super heavy-lift rocket and Orion spacecraft will begin the rollout to the launch pad at Florida’s Kennedy Space Center on Thursday, a much-anticipated development for a launch system that’s been set by delays and a mounting price tag.

Following the rollout Thursday, which is expected to take 11 hours, NASA will conduct a slew of tests to determine launch readiness, like validating the software systems and servicing the boosters. After that, NASA will commence a “wet dress rehearsal,” a series of additional prelaunch tests, during which the system will be loaded with its propellant tanks. Artemis launch director Charlie Blackwell-Thompson told reporters during a media call Monday that the wet dress could take place on April 3, should the rollout go as expected.

It’s been a long time coming. Congress directed NASA to develop SLS to replace the Space Shuttle, the agency’s original spaceflight workhorse, back in 2010. SLS is envisioned as a vehicle to return humans to the moon as part of NASA’s Artemis program, and possibly even further into the solar system.

But ever since, the project has faced repeated setbacks and technical issues. A year ago, NASA’s Inspector General’s office issued a damning report on the costs and contracts associated with the SLS program, finding that “rising costs and delays” have pushed the overall budget for the project far beyond the original scope. Arguably, the biggest winners out of this snafu have been the aerospace primes — notably Boeing, which is heading SLS development, Northrop Grumman and Aerojet, whose contracts made up 71% of the total funding spent in 2019 on all SLS contracts, according to the Inspector General.

All of this has added up to an extremely costly project. At the beginning of March, a NASA auditor reported that the operational expenses for the first four Artemis missions will total $4.1 billion — each. The cost of constructing a single SLS account for around half of that, or $2.2 billion. NASA’s associate administrator for exploration systems development, Tom Whitmeyer, seemed to tacitly comment on the price tag, telling reporters that the project is a “national investment.”

“From my perspective, it’s a strong national investment [and] international engagement in our economy,” he said.

SLS’s high price tag is partly due to the fact that neither stage of SLS is reusable, so each mission will need its own rocket. As opposed to SLS, SpaceX CEO Elon Musk estimated last month that his company’s super-heavy, fully reusable rocket, Starship, would cost less than $10 million per launch within the next few years. SpaceX is developing a version of the rocket for NASA as part of the Artemis program, after winning a $2.9 billion contract for the task last year.