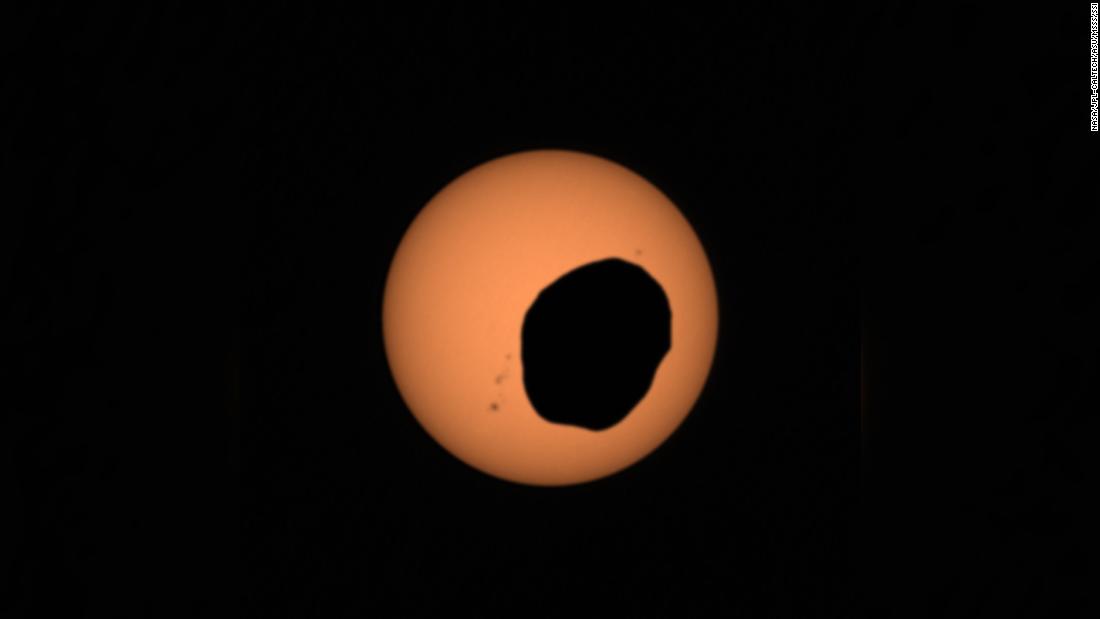 And although it looks like the rover was watching the shadow of a potato cross the red Martian surface, that’s actually Phobos, one of Mars’ two little moons.

Perseverance observed the 40-second eclipse on April 2. If this sounds much shorter than a typical solar eclipse we might see from Earth when our moon passes in front of the sun, it’s because Phobos is about 157 times smaller than our moon.

The rover continues an 18-year history of robots watching eclipses on Mars that began with NASA’s Spirit and Opportunity rovers in 2004 and was followed by Curiosity capturing the first video of a Martian eclipse in 2019.

Perseverance has provided the best video of this eclipse yet using the zoom capabilities of its mast-mounted camera system.

“I knew it was going to be good, but I didn’t expect it to be this amazing,” said Rachel Howson, Mastcam-Z camera operator at Malin Space Science Systems in San Diego, in a statement. “It feels like a birthday or holiday when they arrive. You know what’s coming, but there is still an element of surprise when you get to see the final product.”

The video was also captured in color using a solar filter to reduce the light intensity, allowing scientists to gain more insight about Phobos.

“You can see details in the shape of Phobos’ shadow, like ridges and bumps on the moon’s landscape,” said Mark Lemmon, a planetary astronomer with the Space Science Institute in Boulder, Colorado, in a statement. “You can also see sunspots. And it’s cool that you can see this eclipse exactly as the rover saw it from Mars.”

Eclipse observations of Phobos help scientists track how the moon’s orbit is changing over time and better predict when Phobos’ time will come to an end.

Phobos is essentially doomed and experiencing a slow death spiral with every orbit because it’s constantly drifting closer to the Martian surface. Tens of millions of years from now, it will either crash into Mars or fragment into pieces that will rain down on Mars.

While scientists use the eclipse observations to learn more about Phobos, the Perseverance rover has arrived at its next intriguing target: an ancient river delta in Jezero Crater. The robotic explorer will collect samples from the fan-shaped rocks and sediment on the edge of the crater, created where a river fed into the crater lake billions of years ago.

“The delta at Jezero Crater promises to be a veritable geologic feast and one of the best locations on Mars to look for signs of past microscopic life,” said Thomas Zurbuchen, the associate administrator of NASA’s Science Mission Directorate, in a statement. “The answers are out there — and Team Perseverance is ready to find them.”

And the Ingenuity helicopter just completed its 26th flight on the one-year anniversary of its first flight a year ago.

The helicopter will act as an aerial scout while Perseverance explores the delta.