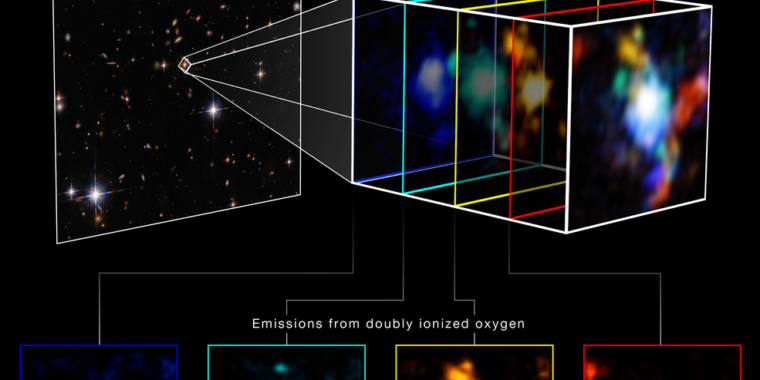 A team of researchers is publishing a paper based on new images taken by the Webb Space Telescope. The images reveal a dense concentration of matter in the early Universe, potentially indicating early stages in the formation of a galaxy cluster. And thanks to the spectrograph present, Webb was able to confirm that several galaxies previously imaged by Hubble were also part of the cluster. It even tracked the flow of gas ejected by the largest galaxy present.

The key hardware for this work is NIRSpec, the Near Infrared Spectrograph that is part of Webb’s instrument package. While the instrument itself is highly sophisticated, it works along principles that are important for the operation of things like your cell phone’s camera.

A spectrograph also works by tracking the light intensity in a limited area of ​​the spectrum. The main difference is that the slices of spectrum imaged are much smaller than the full range of a color like blue. And in this case, they’re not part of colors at all—all the wavelengths are in the infrared area of ​​the spectrum. Still, just like the RGB images produced by a camera, each chunk of the spectrum can either be analyzed individually or combined into a full “color” image that includes a broad range of the spectrum.

Why is a spectrograph useful for looking at distant objects? There are two ways it was critical to this study. The first is that light from the early Universe gets redshifted by the expansion of the Universe as it travels to Earth. So energetic photons at wavelengths like the UV are gradually stretched out until they are registered by Webb as infrared photons. Knowing exactly how stretched they are tells us the distance to objects, and we need to know their present wavelength to determine that. A spectrograph provides that information.

The second key ability provided by a spectrograph is the tracking of the motion materials. All elements have a set of specific wavelengths at which they emit light. But if they’re in motion relative to an observer, then that wavelength is either red- or blueshifted by the Doppler effect, changing the wavelength slightly (this effect will be in addition to the redshifting caused by distance). So by identifying a specific element’s emissions and seeing how they’re shifted, we can track the motion of those atoms, even at vast distances.

An active galaxy in a dense cluster

For the new work, Webb was pointed at what’s called a quasar, or active galactic nucleus. These are incredibly bright due to all the light produced as matter swirls around the supermassive black holes found at the center of galaxies. In this case, the quasar, called J1652, had been identified as very red in color, suggesting that its light had been strongly redshifted and thus that we were seeing it as it was in the early Universe.

The Webb imaging confirmed that the red color of J1652 was due to significant redshifting; the redshift had a value of z ≈ 3, meaning that the galaxy is being viewed as it existed over 11 billion years ago. This is thought to be a critical time in galaxy evolution, when the tremendous energies released by their supermassive black holes started driving star-forming material out of the galaxy, putting a limit on star formation.

Another striking result of the spectrographic data is that at least three other objects that had been detected in the same area in Hubble images turned out to have the same redshift. This means they’re additional galaxies in close proximity to J1652. Given that the entire area imaged is 85,000 light-years across, that’s a very high concentration of galaxies. (For comparison, the Milky Way is over 100,000 light-years across, although it’s substantially larger than these early galaxies.)

In addition to confirming distances, the Webb data allowed researchers to track ionized oxygen atoms, which emit at a convenient wavelength. The red and blue shifts apparent in this data show that the quasar is ejecting material both roughly toward Earth and in the opposite direction, consistent with the two jets that are often formed by black holes. The large amount of material ejected is also consistent with the idea that quasar formation can put a limit on star formation by blasting away the raw materials.

The arXiv. Abstract number: 2210.10074 (About the arXiv). To be published in The Astrophysical Journal Letters.