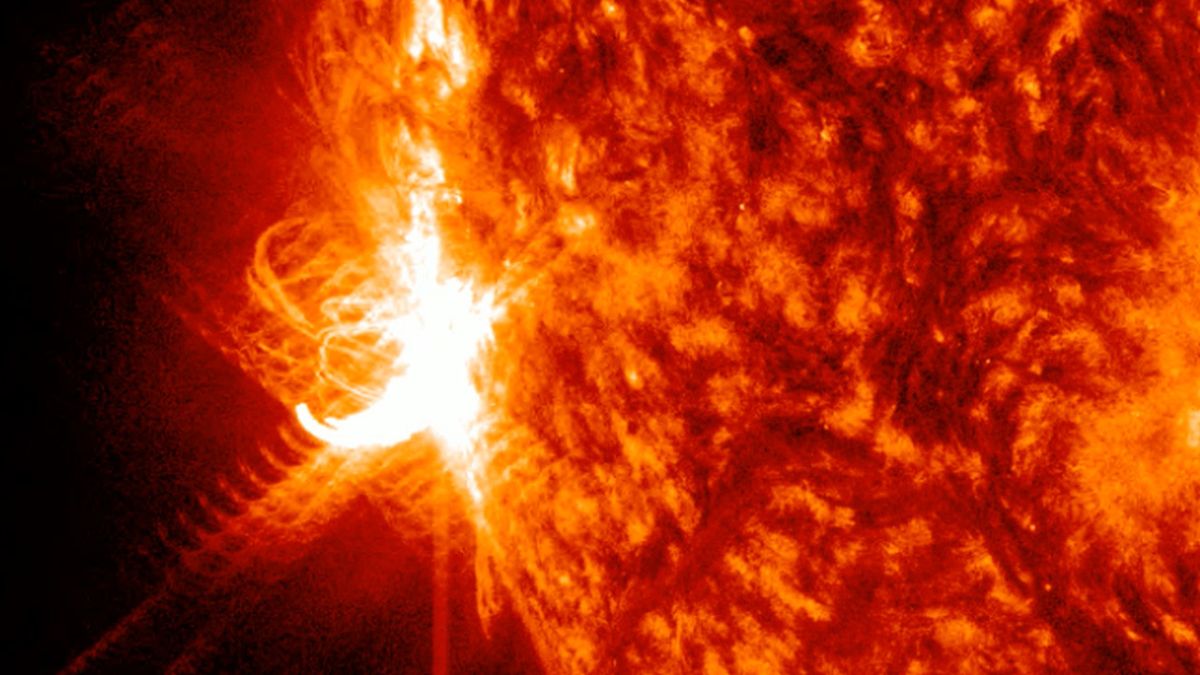 NASA’s Solar Dynamics Observatory recorded a massive solar flare on Thursday (Jan 5) at 7:45 pm EST (0045 GMT on Jan 6). The outburst blasted out a glowing-hot plasma dome that lingered above the sunspot AR3182 for over an hour, according to Spaceweather.com (opens in new tab). Because of the sun‘s rotation, the lively sunspot will soon face Earth and could continue its explosive activity in the days ahead.

Solar flares are categorized by size into lettered groups, with X-class being the most powerful. Within each class, numbers from 1 to 10 (and beyond, for X-class flares) denote a flare’s relative strength. The recent flare clocked in at X1.2, a relatively weak example of the most powerful class.

AR3182 has also been linked to the violent eruption on Tuesday (Jan. 3) that sent a coronal mass ejection (CME), a giant cloud of magnetized plasma, barreling off into space. At the time, the sunspot was hidden on the far side of the sun, and so the eruption posed no danger to Earth.

Related: A giant plasma cloud bursts from the sun, but fortunately it won’t hit Earth

Solar flares are caused when magnetic energy builds up in the solar atmosphere and is released in an intense burst of electromagnetic radiation. More powerful, M-class and X-class flares can cause minor to extensive radio blackouts on the side of Earth facing the sun at the time of the eruption.

This is exactly what happened when the recent X1.2 class solar flare sent a strong pulse of X-rays and extreme ultraviolet radiation toward Earth. Traveling at the speed of light, the radiation reached Earth in just over eight minutes and ionized the upper layer of Earth’s atmosphere — the thermosphere — triggering a shortwave radio blackout across the South Pacific.

According to Spaceweather.com, so far, no CME has been observed emerging from the area after the massive flare.

Solar activity is on the rise as part of solar cycles 25, which scientists predict will peak in 2025. To find out if there is a solar flare today and to keep up with the latest space weather findings, visit the National Oceanic and Atmospheric Administration’s Space Weather Prediction Center (opens in new tab) to see the most recent solar X-ray data from the agency’s GOES weather satellites that perch over the eastern and western US