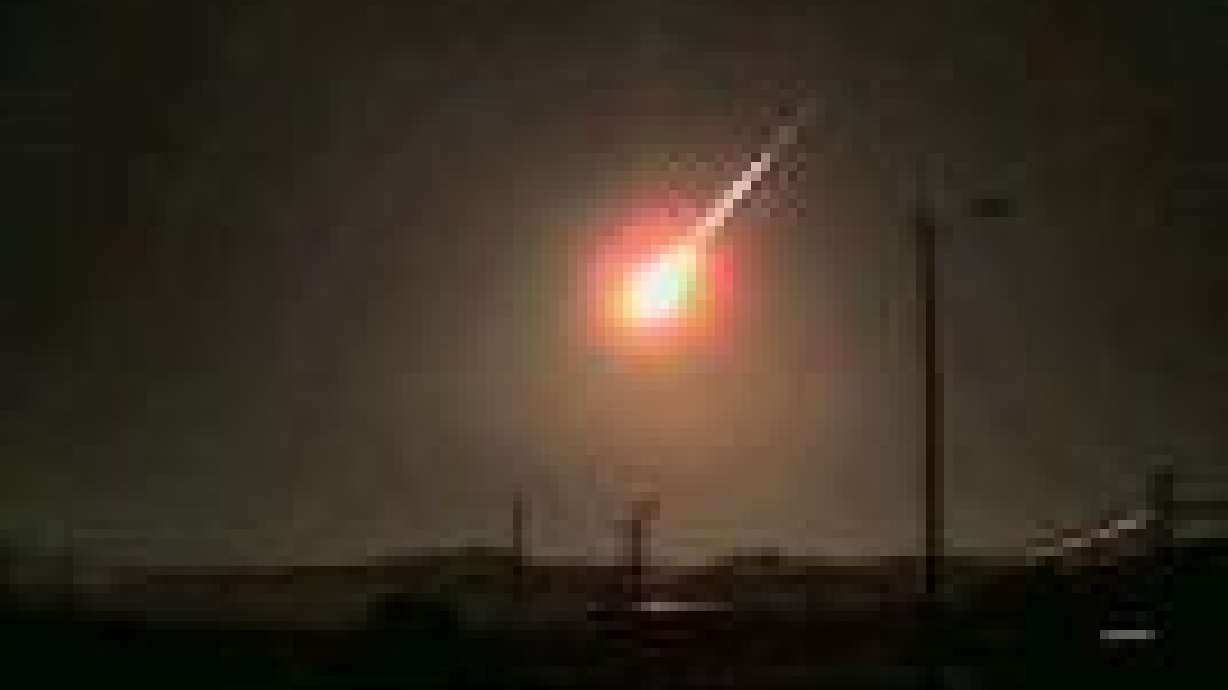 Image captured of fireball that burst over Utah in 2009. On Friday March 11, a similar asteroid burst over the Arctic Ocean. Astronomers discovered and tracked this asteroid only hours before impact. (ksl.com)

SALT LAKE CITY — An asteroid smaller than a GPS satellite but traveling at twice the speed impacted Earth’s atmosphere above the Arctic Ocean on Friday after being discovered only hours earlier.

The harmless collision marks only the fifth time in history astronomers have spotted an object before it collided with Earth.

The asteroid, which measured 10 to 13 feet in diameter (or as the Daily Mail called it, “half the size of a giraffe”), is now officially designated as minor planet 2022 EB5 and was first discovered by the Hungarian astronomer K. Sarneczky , who detected the small bacon flitting through his telescope.

A couple of hours later — sometime in the afternoon according to Mountain Standard Time — the object exploded upon entry into the atmosphere north of Iceland in a 2-kiloton explosion. By then, other astronomers had spread the word, observing the rock and precisely tracking its final destination.

Impact! When 2022 EB5 struck the Earth north of Iceland this morning, it became the 5th asteroid to be discovered prior to impacting Earth. pic.twitter.com/kYsQ40uuFq

While small asteroids hitting Earth are not uncommon, spotting and tracking an object before impact is uncommon.

“This happens all of the time.” Patrick Wiggins, NASA/JPL solar system ambassador to Utah, said of the asteroid’s impact. “The thing that makes this different is that we saw it coming.”

Wiggins said impacts of this magnitude happen at least several times a month, yet most occur unseen over the ocean.

Were it not for the vigilance of a handful of astronomers and scientists, Friday’s collision would have been missed. Italian astronomer Ernesto Guido laid out the timeline of the minor planet, from discovery to disintegration, in a blog post on Saturday.

Sarneczky, who according to Wikipedia has discovered dozens of similar objects, spotted the asteroid in a 0.6-meter telescope on a mountaintop in Hungary. He then placed the object on the Near Earth-Object Confirmation Page for other observers to confirm his sighting. Astronomer Bill Gray then calculated the object’s trajectory, predicting an impact somewhere southwest of the Norwegian island Jan Mayen.

But Gray also discovered there was no time to waste. He shot off a message to fellow minor-planet observers, alerting them of the imminent impact and imploring someone in Europe to get a sighting.

“I strongly urge European observers to take a look for this object,” he said. “(The impact is) about forty minutes from ‘right now.'”

Shortly after, Gray replied to his own message, with more observation data from Slovakia and an “obligatory disclaimer” belying any fears of a catastrophe.

“This thing is maybe a meter or two across … mostly harmless,” he said in the message thread entitled “Sar2953 = small impactor.”

After impact, reports came in on the message thread of reported observations in Iceland, as well as China. Participants in the thread started crunching the numbers, trying to discern the details of the collision. One participant pointed out tracking the object was similar to tracking GPS satellites, which move about half as fast.

I did not, but facebook friends north east of Husavik were asking about a blue-ish explosion/flash in the sky that lasted for about two seconds. The time of the questions fits. pic.twitter.com/6c2n7V4uaK

A low-frequency observation taken in Greenland at impact time revealed not only the size of the explosion left by the object but also its size, Guido wrote in his post.

“From this data yield is approximately 2-3 kT TNT. At 15 km/s, this is roughly 3-4 m diameter,” came the report from Greenland.

Wiggins said this is surely not as large an impact as the Tunguska impact in Siberia, or even the more recent Chelyabinsk impact in 2013, also over Russian skies. Yet, the sighting still taught us lessons.

“It is a great example of why we need more than two hours notice if we want to do anything about it,” said Wiggins.

Contrary to some social media posts, the ambassador said, we did not “dodge a bullet.” But in the event a larger object was on a collision course with our planet, he said we would want “months if not years” to prepare.

Still, Wiggins described Earth’s exposure to minor planets such as a “cosmic shooting gallery.” 2022 EB5 is considered an Apollo asteroid, which is a class of asteroids whose orbits cross Earth’s orbit.

No meteorite fragments have been reportedly discovered after 2022 EB5’s impact. It is rare for even predicted meteorites to be found, said Wiggins. The first recorded impact yielded small fragments of meteorite.

Utah has also been targeted by small asteroids. Some Utahns may remember the night sky lighting up in 2009 when a meteorite fell in the West Desert. Wiggins recalled sitting in his living room when the fireball burst in the sky. Though that event was unexpected, the sonic boom heard in Utah made it possible to track, Wiggins said. This meteorite was also the focus of an episode of the show “Meteorite Men” in 2010.