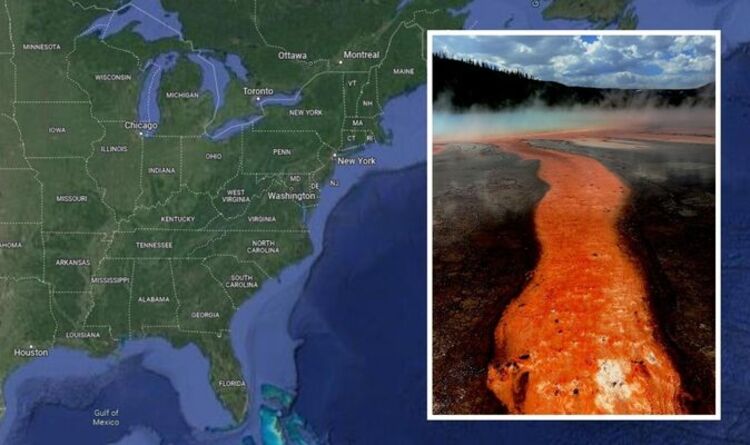 Volcanic eruptions have unsettled human civilizations for thousands of years, such as the infamous Mount Vesuvius eruption of 79 AD, which buried the ancient city of Pompeii in meters of volcanic ash and pumice. More recently, the eruption in Tonga in January blasted ash 60,000 feet (18,000 meters) into the sky and obliterated a volcanic island. The eruption, which killed at least five people, was described as a once-in-a-thousand-year event and is expected to rank as high as five on the Volcanic Explosivity Index (VEI).

They erupt around every 17,000 years and are approximately 1,000 times more powerful than the Mount St Helens eruption of 1980, the deadliest in US recorded history.

There are around 20 known supervolcanoes on Earth — including Yellowstone in the US, Lake Toba in Indonesia, and Lake Taupo in New Zealand.

A breakthrough 2018 study revealed a new supervolcano may be brewing beneath the US states of Massachusetts, Vermont and New Hampshire.

Scientists warned a ‘distant relative’ of Yellowstone is brewing beneath the US. (Image: GETTY)

A paper in 2016 initially concluded that there is an active, independent upwelling of molten rock below the surface — known as the North Appalachian Anomaly.

Scientists at Rutgers University used two years of data off the back of the 2016 study to establish a better idea of ​​what was brewing beneath.

Professor Vadim Levin, a geophysicist, told Fox News: “The upwelling we detected is like a hot-air balloon, and we infer that something is rising up through the deeper part of our planet under New England.”

The region in which they made their discovery is geologically stable and has no active volcanoes.

The magma build-up, therefore, is relatively recent in terms of the Earth’s geological processes — tens of millions of years in other words.

Prof Levin continued: “It will likely take millions of years for the upwelling to get where it’s going.

“The next step is to try to understand exactly how it’s happening.”

He added: “It’s not Yellowstone-like, but it’s a distant relative in the sense that something relatively small — no more than a couple of hundred miles across — is happening.”

The most dangerous active volcanoes on Earth. (Image: ExpressNewspapers)

The magma bubble may never eek its way to the surface. If it does, it is likely to take a very, very long time.

Prof Levin told National Geographic in 2018: “Maybe it didn’t have time yet, or maybe it is too small and will never make it.

“Come back in 50 million years, and we’ll see what happens.”

Supervolcanoes occur when magma in the mantle rises into the crust but is unable to breakthrough.

Pressure builds in a large, growing magma pool until the crust can no longer contain the pressure.

They can occur at hotspots where Yellowstone Caldera is, or at subduction zones where Toba is.

When they do erupt, they can cause long-lasting climate change and threaten species with extinction.

The 1815 eruption of Mount Tambora caused the “year without a summer”, and was the most powerful volcanic eruption in recorded human history.

Yellowstone supervolcano: Expert on ‘danger’ of Caldera in 2015

With a recorded VEI of 7, any potential supereruption would be 10 times more powerful than Mount Tambora.

The most recent supereruption was New Zealand’s Taupo approximately 26,500 years ago.

Most of New Zealand was affected by ashfall, with an 18cm layer left on the Chatham Islands some 1,000km away.

How humanity might respond should such an event happen again isn’t clear, but scientists have indicated we may not get a huge amount of notice when the next supereruption is coming.

“This suggests signs of an impending supereruption, such as a significant increase in earthquakes or rapid ground uplift, might not be as obvious as pictured in disaster movies by the film industry.”

Other analysis at Yellowstone, however, has suggested magma reservoirs can reach eruptive capacity within decades — which scientists would likely detect.