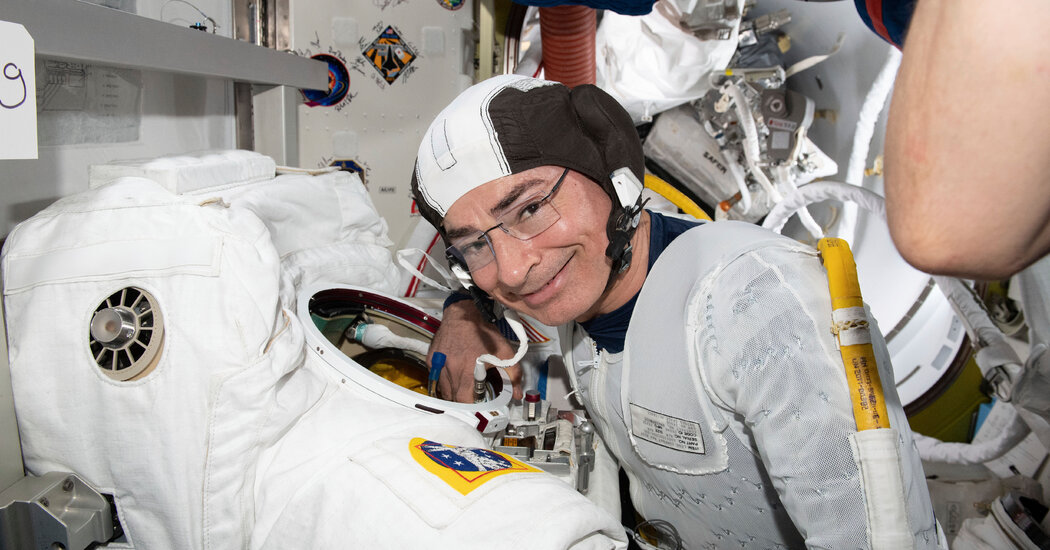 Early on Wednesday morning, Mark Vande Hei, like many NASA astronauts before him, entered a Russian spacecraft docked at the International Space Station for the return trip to Earth.

The space station, orbiting about 250 miles above the surface, is one of the few places where day-to-day cooperation between the United States and Russia continues despite the disruption of diplomatic and economic ties because of Russia’s invasion of Ukraine.

About eight hours later, Mr. Vande Hei and two Russian astronauts, Anton Shkaplerov and Pyotr Dubrov, are to bump to a landing in Kazakhstan, met by NASA and Russian personnel.

“Like we’ve always done,” Joel Montalbano, the space station program manager for NASA, said during a news conference a couple of weeks ago.

When is the departure and how can I watch it?

NASA is streaming the hatch closure and other parts of the departure and return on its website and on YouTube, or you can watch it in the video player embedded above.

Live video of the departure process began at 11:30 pm Eastern time when Mr. Vande Hei, Mr. Shkaplerov and Mr. Dubrov could be seen busying themselves with procedures that needed to be completed before the hatch could be sealed.

The astronauts then began saying their farewells to the other seven astronauts still aboard the station in a series of embraces and photographs taken in the close quarters of the module leading to the spacecraft.

The astronauts then boarded the Soyuz and the hatch was closed at 12:16 am, later than the midnight time that had previously been announced on the schedule.

At 3:21 am, the spacecraft and the crew is scheduled to undock from the space station and begin the return to Earth, but not before the Soyuz completes a flyaround of the outpost to take pictures and video of its exterior.

Are the US and Russia still cooperating in space?

President Biden has harshly condemned President Vladimir V. Putin, and the United States government has placed a wide range of sanctions on Russia for its invasion of Ukraine, including some related to aerospace technologies. But cooperation in orbit has continued.

That is despite bellicose statements from Dmitry Rogozin, who leads the Russian space program. He shared a video that suggested the Russians might leave Mr. Vande Hei behind. NASA officials have carefully sidestepped what Mr. Rogozin has said and insisted that nothing has changed.

Ongoing peace talks. During peace talks between Russia and Ukraine in Istanbul, Russia promised it would “reduce military activity” near Kyiv, and Ukraine said it was ready to declare itself permanently neutral. Even so, weeks of further negotiation may be needed to reach an agreement, and Russia appears determined to capture more territory in eastern Ukraine.

On the ground. Russia’s apparent concessions in the north of Ukraine reflected a successful Ukrainian resistance that has bogged down Russia’s forces around Kyiv’s suburbs and retaken territory near the capital and cities closer to the Russian border.

New sanctions. The United States is preparing new sanctions targeting the supply chains of Russia’s military industrial sector as it seeks to erode Moscow’s ability to attack Ukraine. The new measures will be rolled out in coordination with Western allies.

Other relationships in space have not been spared. The European Space Agency postponed a rover mission to Mars because it relied on a Russian rocket. And a British satellite internet company, OneWeb, canceled a series of launches that used Russia’s Soyuz rockets, shifting some of them to SpaceX rockets.

What happens when the astronauts land?

Many American government officials have been brought home from Russia because of the invasion of Ukraine. But a usual NASA contingent of flight doctors, public affairs officials and representatives from the astronaut office and the space station management will be there to meet Mr. Vande Hei when he lands.

After initial medical checks, the astronauts will rest for a while in tents before traveling by helicopter to the airport where Mr. Vande Hei and his NASA colleagues will board a Gulfstream jet and take off.

Mr. Jordan said a NASA podcast episode that described an earlier return was “an accurate depiction of the sequence of events that should be expected.”

About 24 hours after landing in Kazakhstan, Mr. Vande Hei will be back in Houston.

How long has Mark Vande Hei been in orbit?

The landing will end nearly a year in space for Mr. Vande Hei. His stay of 355 days is the longest single spaceflight by an American. That passed the mark of 340 days set by Scott Kelly six years ago.

“The last day is different,” Mr. Kelly recalled about the end of his space journey in an interview.

The final chores included cleaning up his area for the next astronaut, throwing away unneeded items and getting in touch with friends and family about plans back on the ground.

Then there was drinking water to stave off dehydration during the return and reviewing procedures, Mr. Kelly said.