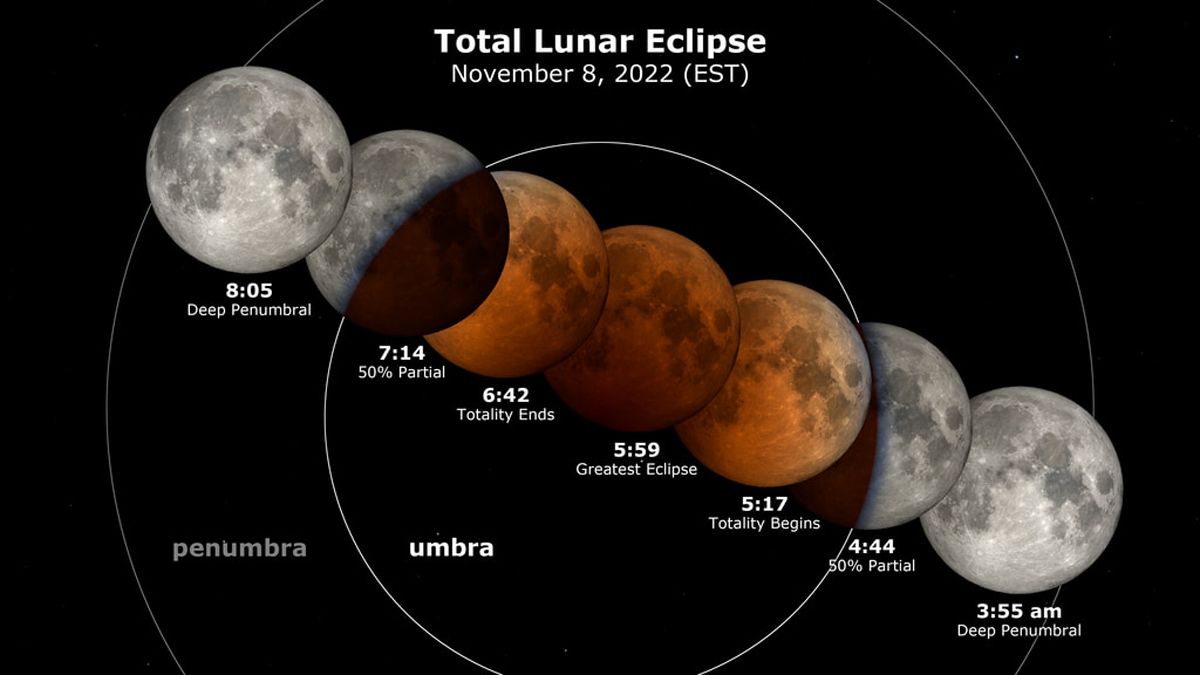 The last total lunar eclipse until 2025 will turn the moon blood-red on Tuesday, Nov. 8, but exactly when you should look up depends on where you are.

The eclipse, dubbed the Beaver Blood Moon lunar eclipse since it occurs during November’s Full Beaver Moon, will be visible across North America, the Pacific, Australia and Asia. During the eclipse, the full moon will pass through Earth’s shadow as it moves behind our planet with respect to the sun, giving it a spectacular bloody color in the process. You can watch the total lunar eclipse on Space.com for free, courtesy of several webcasts from observatories across the United States.

Tuesday’s “blood moon” eclipse will begin at 3:02 am EST (0803 GMT) when the moon begins to enter the outermost region of Earth’s shadow. You’ll have to adjust the time for your time zone (it begins at 12:02 am PST for observers on the US West Coast, for example). While this marks the official beginning of the lunar eclipse, it can be hard to see as the Earth’s penumbral shadow is very slight.

More: Lunar eclipse guide: When, where and how to see them

“The moon begins to dim, but the effect is quite subtle,” NASA wrote (opens in new tab) in an eclipse timeline.

More striking will be the partial eclipse phase, which will begin at 4:09 am EST (0909 GMT) and last just over an hour. This is when the moon enters the earth’s umbra, or darker portion of the earth’s shadow. If you didn’t notice the penumbral eclipse, you should be able to see this with your unaided eye.

“To the naked eye, as the moon moves into the umbra, it looks like a bite is being taken out of the lunar disk,” NASA wrote in its guide.

If you take a photo of the last total lunar eclipse until 2025 let us know! You can send images and comments to [email protected].

“The moon will turn a coppery-red. Try binoculars or a telescope for a better view,” NASA wrote. “If you want to take a photo, use a camera on a tripod with exposures of at least several seconds.”

Once the total phase of the lunar eclipse ends, it will return a partial phase in a reverse of what we saw at the beginning of the eclipse. The partial phase will end at 7:49 am EST (4:49 am PST, 1249 GMT), but by this time the moon will have set for Eastern time zone observers. For those in locations where the moon is still visible, the final penumbral phase will last until 8:50 am EST (5:50 am PST, 1350 GMT).

And those are the times for the Nov. 8 total lunar eclipse! If you miss this lunar event, the next total lunar eclipse will occur on March 14, 2025, though there will be partial lunar eclipses in 2023 and 2024. Of course, there is a full moon every month, so you can practice your lunar photography and observing all year in advance of the next moon eclipse.

Editor’s note: If you snap an amazing lunar eclipse photo and would like to share it with Space.com’s readers, send your photo(s), comments, and your name and location to [email protected].