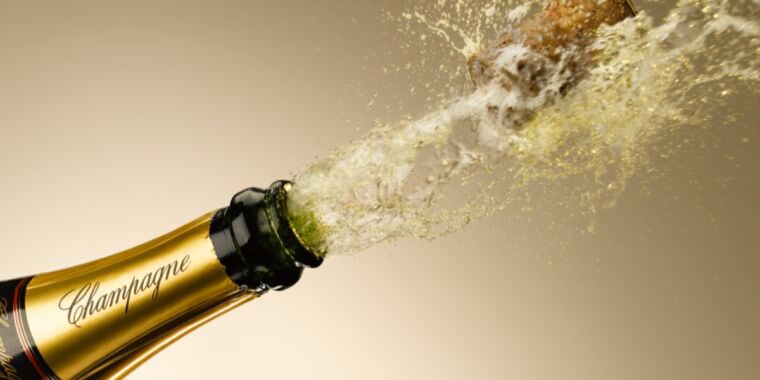 The pop of a champagne cork turns out to have something in common with a rocket launcher, according to a recent paper published in the journal Physics of Fluids. Scientists from France and India used computer simulations to reveal what happens in the microseconds after uncorking a bottle of champagne in full detail. They discovered that in the first millisecond after the cork pops, the ejected gas forms different types of shockwaves—even reaching supersonic speeds—before the bubbly settles down and is ready to imbibe.

“Our paper unravels the unexpected and beautiful flow patterns that are hidden right under our nose each time a bottle of bubbly is uncorked,” said co-author Gérard Liger-Belair of the University of Reims Champagne-Ardenne. “Who could have imagined the complex and aesthetic phenomena hidden behind such a common situation experienced by any one of us?”

Liger-Belair could imagine it, for one. He has been studying the physics of champagne for years and is the author of Uncorked: The Science of Champagne. He has gleaned numerous insights into the underlying physics by subjecting champagne to laser tomography, infrared imaging, high-speed video imaging, and mathematical modeling, among other methods.

According to Liger-Belair, champagne’s effervescence arises from the nucleation of bubbles on the glass walls. Once they detach from their nucleation sites, the bubbles grow as they rise to the liquid surface, bursting and collapsing at the surface. This reaction typically occurs within a couple of milliseconds, and the distinctive crackling sound is emitted when the bubbles rupture. When the bubbles in champagne burst, they produce droplets that release aromatic compounds believed to enhance the flavor further.

Also, the size of the bubbles plays a critical role in a really good glass of champagne. Larger bubbles enhance the release of aerosols into the air above the glass—bubbles approximately 1.7 mm across the surface. And the bubbles in champagne “ring” at specific resonant frequencies, depending on their size. So it’s possible to “hear” the size distribution of bubbles as they rise to the surface in a glass of champagne.

As we’ve reported previously, champagne is usually made from grapes picked early in the season, when there is less sugar in the fruit and higher acid levels. The grapes are pressed and sealed in containers to ferment, just like any other wine. CO2 is produced during fermentation, but it’s allowed to escape because what you want at this stage is a base wine. Then there is a second fermentation, except this time, the CO2 is trapped in the bottle, dissolving into the wine.

Striking just the right balance is critical. You need about six atmospheres of pressure and 18 grams of sugar, with just 0.3 grams of yeast. Otherwise, the resulting champagne will either be too flat, or too much pressure will cause the bottle to explode. You also need the right temperature, which influences the pressure inside the bottle. That high pressure CO2 is finally released when the cork is popped, releasing a gas plume mixed with water vapor that expands out of the bottleneck and into the ambient air.

Previous experimental work by Liger-Belair and his colleagues used high-speed imaging to demonstrate that shock waves formed when a champagne cork was popped. With the present study, “We wanted to better characterize the unexpected phenomenon of a supersonic flow that takes place during champagne bottle uncorking,” said co-author Robert Georges of the University of Rennes 1. “We hope our simulations will offer some interesting leads to researchers, and they might consider the typical bottle of champagne as a mini-laboratory.”

Based on those simulations, the team identified three distinct phases. Initially, as the bottle is uncorked, the gas mixture is partially blocked by the cork, so the ejecta can’t reach the speed of sound. As the cork releases, the gas can then escape radially and hit supersonic speeds, forming a succession of shock waves that balance its pressure.

Those shock waves then combine to form telltale ring patterns known as shock diamonds (aka thrust diamonds or Mach diamonds after Ernst Mach, who first described them), typically observed in rocket exhaust plumes. Finally, the ejecta slows down to subsonic speeds again when the pressure drops too low to maintain the required nozzle pressure ratio between the bottleneck and the edge of the cork.

The research is relevant to a wide range of applications involving supersonic flow, including ballistic missiles, wind turbines, underwater vehicles—and of course, a rocket launcher. “The ground that moves away from the launcher as it rises in the air then plays the role of the champagne cork on which the ejected gases impact,” the authors explained. “Similarly, combustion gases ejected from the barrel of a gun are thrown at supersonic speeds onto the bullet. The problems are faced with the same physical phenomena and could be treated using the same approach.”